Signed an international free agent in 2009 by the Florida Marlins, Domingo German has turned in one hell of a campaign for the 2019 New York Yankees. In a year when the Yankees have seen a tremendous number of injuries, German has been among the lone constants for the team. Perhaps thankfully, the young right-hander already had Tommy John surgery in 2015. The Injury Gods gave the 2019 Bombers a small bit of good fortune concerning German.

Coming into the season, however, there were some big questions and concerns over German’s ability. In 2018 he saw time in the bullpen, but also in the starting rotation and did not look the part of a Major League pitcher. So what was the big transformation that has allowed German to excel as such a higher level, and can we count on the performance in the future?

2018 in Review – Electric Stuff with Not So Electric Results

German came equipped with a three-pitch mix of a fastball, curveball, and changeup. In 2018 he was figuring out which of his pitches would play at the MLB level. A big lesson for German was that his changeup just wasn’t all that effective against Big League hitters. As you can see below hitters feasted on the change in comparison to the rest of his arsenal. 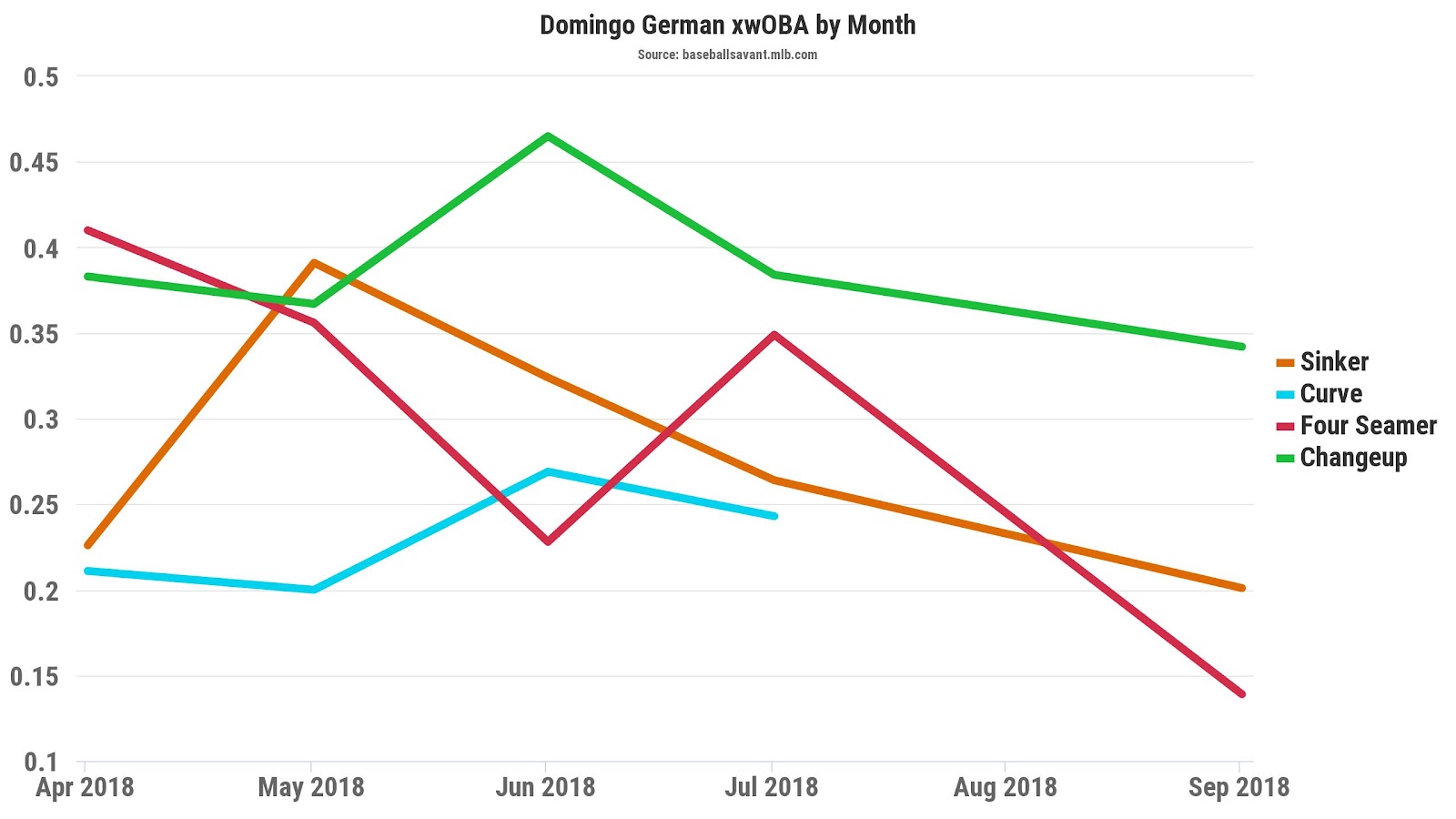 You’ll notice that over the course of the year that the changeup’s wOBA started to decline. That’s because the righty adjusted to the league and started throwing the pitch less often. 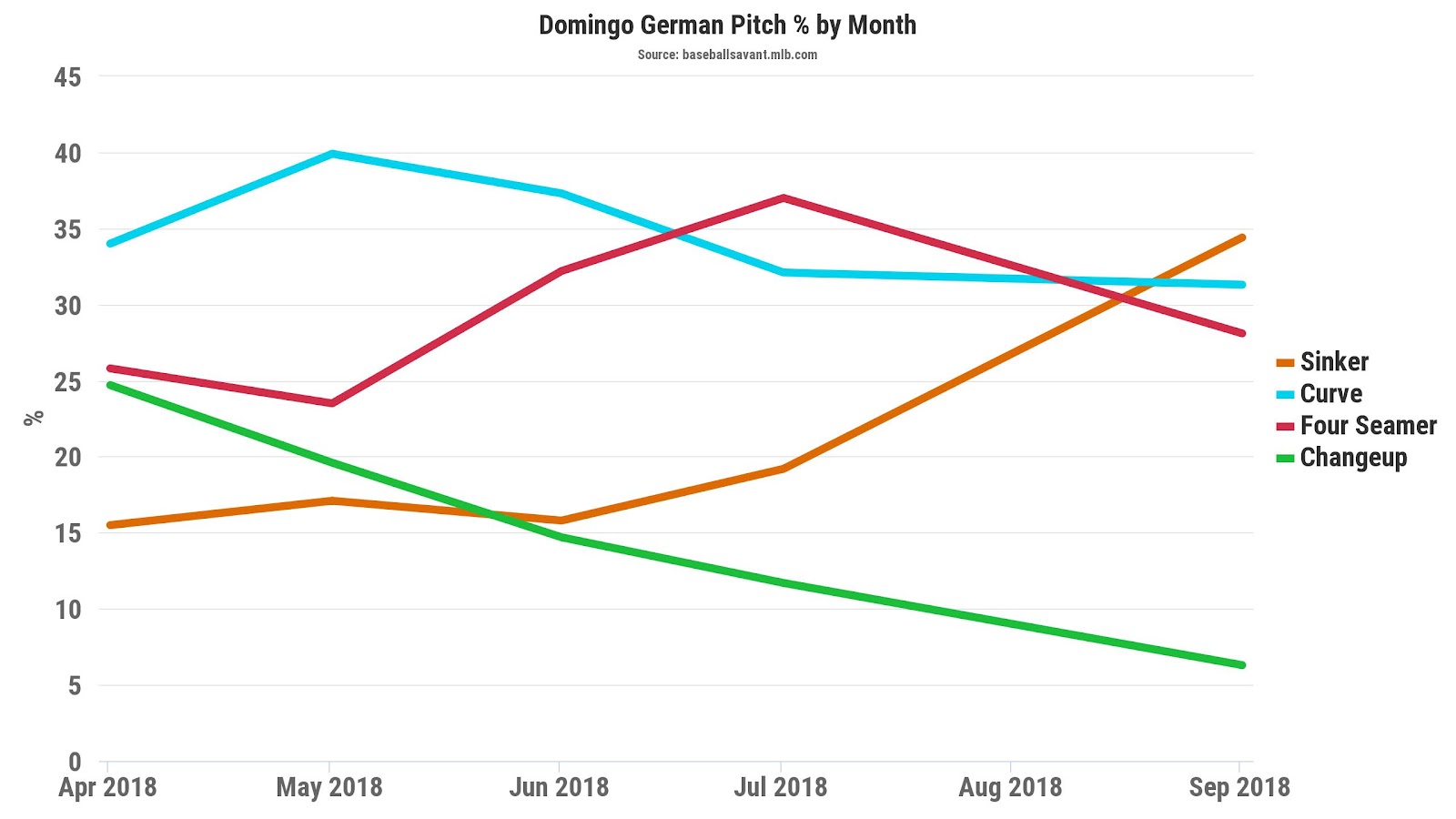 Still the numbers overall for German in 2018 were not good–as he posted a 5.57 ERA in 85.2 innings–but there were some positive indicators for the 26-year-old. While the ERA was ugly he showed some signs of getting unlucky with a 3.94 xFIP and a  3.68 SIERA.

German’s curveball has been an absolute force in 2019, limiting batters to a .195 WOBA and a .200 xWOBA that indicates the performance is legit. Finding the proper pix mitch coupled with the deadliness of German’s curve has resulted in a breakout campaign where he’s posted a 3.38 ERA while striking out 9.72 batters per nine. Perhaps most impressive is German’s 1.05 WHIP, which has helped keep the Yanks’ pitcher’s ERA artificially lower than it should be.

Keeping men off base has come from a combination of luck, a 14.2% swinging-strike rate, and limiting his base on balls to a miniscule 2.15. All of that has helped German strand runners at a 79.2% clip, which is likely unsustainable, especially when considering the Yankees defensive rankings. Thus some regression in WHIP and LOB%, combined with above league average hard-hit rate, and xWOBACON are likely to produce a pitcher with an ERA closer to the four range than 3 for the remainder of the season. Still a pretty damn good pitcher, especially considering the offense friendly park German calls home.

Overall we’re left with a 26-year-old pitcher who’s displayed enough skills that he’ll likely produce SP3-4 for the foreseeable future. If he ever manages to figure out his changeup there’s even more room for growth here, as his curve and fastball have both shown to be above league average pitches. Considering the name value that German has built up over the course of this season, and given that he’s likely at least somewhat overachieving currently, it’s not a great time to buy on the hurler. Still, with regression appearing imminent, there may be a buying opportunity in the near future or next season. A young SP3 with potential for more isn’t a bad asset to own. I’m holding the shares I have.

In general, 2015 and 2016 were bad years for everyone. Here at the Dynasty Guru, we ranked Gary Sanchez 26th and 20th overall in the catcher rankings. We labeled 2015 as a “put up or shut up” year for Sanchez. We were handwringing over the possibility that Brian McCann would block the prospect from considerable playing time and he’d wind up being a backup.

In 2015, the 3 best catchers by WAR were as follows: Buster Posey, Francisco Cervelli, and Russell Martin.  Here was their composite profile:

In 2016, the 3 best catchers by WAR were as follows: Buster Posey, Jonathan Lucroy, and Wilson Ramos. Here was their composite profile:

In 2016, Gary Sanchez arrived with a thunderous crack of the bat.  With respect to Yasmani Grandal, Sanchez has unquestionably been the 2nd best offensive catcher in baseball since that time. Don’t believe me? When using the Fangraphs leaderboard, and filtering the catching position by a minimum of 220 plate appearances, Sanchez has the 2nd, 5th, and 25th best offensive outputs out of 145 possible catchers. Boosting his presence is prodigious power. Three of Sanchez’s past four seasons grace the top of the positional leaderboard in home runs, HR/FB%, and wRC+.

But let’s address the elephant in the room. By all accounts, 2018 was a no good very bad year for Gary. Despite the surface-level batting profile screaming “SELL ME”, Sanchez was unquestionably still very good and very strong. His Statcast metrics pointed towards a very healthy exit velocity (as a byproduct the barrel rate and hard hit % were very good) and launch angle.

Still, the New York media and leadership lambasted Sanchez for a lack of focus and hustle. His defense was the main point of contention, allowing a league-leading passed ball rate for backstops and a questioning of whether the catcher position was truly his long term position. From a fantasy perspective, of course, leads to a lot of alarmists dropping him in the rankings. If Gary wasn’t playing catcher, is he really worth the juice?

Here at the Dynasty Guru, we encouraged you to keep the faith by ranking him 2nd overall. If this year is any indication, however, we were selling old Gary short.

At the time of this update, we’re nearing the end of July and there are 17 players with 24 or more home runs in major league baseball. Gary Sanchez is one of six players who have his that many in 13 or fewer plate appearances (per home run):

Here’s the rolling averages of weighted on-base and hard-hit % to compare this year and last year vs. league average as well:

If you’re wondering if Gary is using the short right porch in Yankee stadium to his benefit, the answer is no. He’s absolutely murdering the ball to left and left-center. How many of these do you think went over 400 feet? 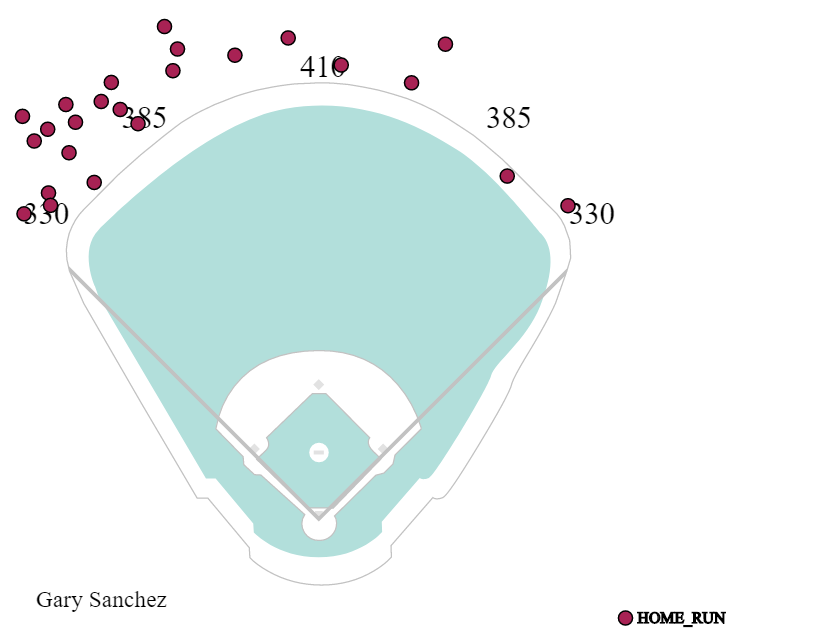 So, if we were going to play the game that asks, “Is Gary Sanchez as valuable at a non-catcher position?” The answer is unquestionably, yes. In fact, from a fantasy perspective, he might be more valuable if he’s able to garner more plate appearances to accrue more counting stats.  Still, that’s not the world we live in.  Gary Sanchez is a catcher and, without a doubt, the number 1 dynasty backstop in all of baseball.

If you’re in or near your window, he’s worth every penny to invest in.

Garcia has cruised through the minors since being signed out of the Dominican in 2015 for $200,000, getting the call last week to Triple-A as a 20-year-old. It doesn’t take much to see why either. At every level he’s been at he’s dominated the competition with a power two-pitch combo of a 60-grade fastball and a 60-grade curveball. The curve is a massive power pitch that generates a ton of chase out of the zone, setting up his fastball well. At every level, Garcia has had a strikeout rate of over 12 strikeouts per nine but has at the time struggled with walks. The walks, so far, have not been a problem due to his ability to overpower guys with strikeouts. Double-A was not much of a test for Garcia, and it’s very possible he gets his first taste of the majors this season as a bullpen arm.

As Garcia continues to steamroll the minors he does carry some stereotypical risk of pitching prospects. First is his frame. He stands just 5’9” and 163 pounds so the usual small stature concerns of whether or not he can handle the workload of a full season are certainly there. The other is with his delivery. He repeats it well enough but it comes with a bit of a jerky arm motion that gives me pause with today’s arm issues correlating to injury more frequently than ever. Two things that he does have going for him to balance that out are his velocity and his repertoire. He tops out at 96, which may indicate his delivery is much more smooth than it appears. The other positive, if he does end up having to resort to a reliever, his stuff is so damn good he would immediately become a top 3 closer. Thankfully for fantasy purposes, that wouldn’t be a complete loss on the investment.

A good indicator of how the Yankees could use Deivi to start is to look at how they’ve used recent similar pitching prospects. That’s good news for Deivi owners because although Luis Severino and Jonathan Loaisiga are both currently hurt with arm issues, they are both shorter prospects that the Yankees are giving every opportunity to remain in the starting rotation. The same should be given to Garcia- even if he breaks into the Majors this season as an emergency reliever, I wouldn’t expect him to remain there initially. I would expect a tire or two to fall off much farther down the road to push Garcia to the pen and even then there is still plenty of fantasy value there to be worth holding onto him if that move was made.