Odorizzi entered his first full season with the Rays in 2014 with some lofty expectations, as he was ranked the 39th best prospect in baseball by MLB.com. All things considered, it was a relatively successful rookie campaign- Odorizzi was able to pile up over a strikeout an inning and keep the walks in check (3.16 BB/9) with a 4.13 ERA  over 168 innings. It was enough for folks to buy into Odorizzi as a valid fantasy option with the expectation he would continue to improve. While he wasn’t exactly bad over the next few years, he also wasn’t exactly good for fantasy owners. In the seasons where his ERA was decent he couldn’t manage to make his other ratios all that great, and the season where his other ratios recovered, his ERA suffered. The other issue that has continued to follow him around is the injury bug. Only once has Odorizzi ever been able to surpass 170 innings.  All in all, Odorizzi continued to leave more on the field than he should have and frustrated fantasy owners by never fully reaching his full abilities.

This season it has finally all come together for Odorizzi. His strikeout rate is currently at a career high, and his earned run average a career low. There are a couple of things that stand out in his pitch mix that is significantly different from previous seasons. First, he has completely given up on throwing a slider. It was his second-most used pitch last season at 21% of his throws, and he has abandoned it this season. That’s a rather large change. In place of his slider, he has now moved to throw his cutter much more often. Last season his cutter was his least-used pitch, but as a percentage, it garnered the most whiffs. He’s gone from throwing it 2.4% of the time to 19.6% of the time, and it’s still generating a significant amount of whiffs (26.8%). Something else that’s noticeable: his fastball has gained 2 miles an hour. This might actually be more indicative of the Twins organization, as this is not the first time a pitcher has arrived, embraced analytics and found success (see: Ryan Pressly). Still, it’s a noticeable uptick. Odorizzi’s performance thus far has even been good enough to gain some Cy Young attention. Sports Betting Dime currently has Odorizzi in their top 10, currently with the 9th shortest odds to win the American League Cy Young and prior to the all-star break was as high as the second shortest odds behind only Justin Verlander.

Odorizzi’s success is really weird. One of the red flags that immediately jumped out to me was his 30% ground ball rate. That is incredibly low for any pitcher, and one that often doesn’t lead to success. However, that’s just about where he has been year over year and its seems to be just his normalized range. It’s almost baffling how a pitcher has continually operated with that few balls on the ground and been successful, but at some point, and especially by now, it would have caught up to him. So, although it is a very low percentage, I’m comfortable with accepting this as his norm. Thus, taking in his stat line as a whole, the changes he’s made to his pitch mix are significant enough for me to buy into Odorizzi as a legit fantasy pitcher now and going forward.

First, let’s get this out of the way. This analysis is based solely on the talent and numbers of Miguel Sano. Your opinions on how much of a trash person he is for his behaviour off the field are entirely up to you, and that can have whatever influence it may over your choice to have Sano as an asset. I’m just telling you if I think he’ll be a successful baseball player on the field. Sano’s intelligence, or lack thereof, are another article entirely.

With that being said, it’s been a bumpy road for the monstrously-sized baseball player. Time due to injuries and off the field issues have impacted the young man’s development time. However, in the 421 games he has played, Sano has mashed 97 homers and posted a .821 OPS.  The sheer amount of power the Minnosota third baseman possesses is enough to intrigue any dynasty baseball player.

2018 in Review – Not Quite the Best Version of Sano

A combination of field issues, both on and off, kept Sano from playing in more than 71 games last season. Even when he was on the field, he was swinging and missing at an apocalyptic 38.5%, and when he was making contact he wasn’t capable of providing his usual other-worldly power.  He likely wasn’t quite at full health yet as his exit velocity, launch angle, and all his xStats were down from the previous season. So while he was on the field attempting to do his thing, I think it’s quite probable that he wasn’t at full health. The question here was: is Mguel Sano a buy low or was the out-of-shape big boy doomed to have recurring injuries that zap his power?

This season has been a different story for Sano. Thus far he’s setting career highs in exit velocity, launch angle, pitches per-plate appearance, and hard hit%. Meanwhile he’s posting the second best barrel%,  and WOBA of his career as well. Sano’s raised his ISO up to a bulldozing .338, and mashed 13 homers in 40 games. Of course with all those positives surrounding the quality of contact Sano is making, there are still issues with the amount of it he’s making.

Again he’s posting a tragic strikeout-rate near 40%, which has lead to a bad-no-good average of .236. In average leagues you’ll need to be hard pressed for power to plug Sano into your line-up on a daily basis. Those in OBP leagues, though, are lucky that he’s still walking at a double-digit clip, and though the on-base of .321 isn’t exactly sexy, it’s very much usable. His .574 slugging is likely to regress, but he’ll still be around .500 and that’s a buttload off power likely acquired on the cheap in trade or off waivers in some leagues.

Analyzing his skill set only, Sano remains a potential target in dynasty leagues. Still only 26 with elite strength, and a budding surrounding supportive cast. There’s enough here in which to invest or to hold on to for the foreseeable future. Sano can reach a whole new level if he’s ever able to reduce the strikeouts, and I’ve got faith that he can at least reduce them to the mid-30’s this season. As I said before, he remains more of an asset for OBP leagues, but is a potential easy buy for rebuilding teams in AVG as well. I wouldn’t mind having him as a placeholder with the potential to turn into more. There’s all sorts of risk with Sano, due to his off the field behaviour, frequent injuries, and swing-and-miss approach. Still, if you’re in a position to take on the risk, I’d say buy.

Kiriloff burst onto the scene after being selected by the Twins in the 2016 draft.  A high school bat with the raw tools dynasty players dream on in a system stacked with young talent amounted to a tantalizing prospect.  A 2016 rookie ball debut solidified those early expectations and the chorus of true believers that Kiriloff was the next Dude.  Sadly, Kiriloff lost the 2017 campaign due to Tommy John and the Iscariots ran off to find another, newer idol to worship. Some sold Kiriloff for other lesser assets, but for those who laid in wait, their prize possession returned from the dead in 2018.

Kiriloff absolutely obliterated the 2018 A and advanced A competition. At the tender age of 20, he flirted with that ever sexy .300/.400/.500 slash line over 500 plate appearances. Dynasty fans throughout the nation were running off to hang posters of Kiriloff’s HR spray chart (below) over their bed. Here at the Dynasty Guru, our flagship podcast listeners anointed him the Podspect of the Year in our bracket challenge.  Despite some minor deficiencies in the walk & strikeout rates and a wildly high .399 BABIP in advanced A-ball, Kiriloff should have been looked upon as a model prospect with mere beauty marks. 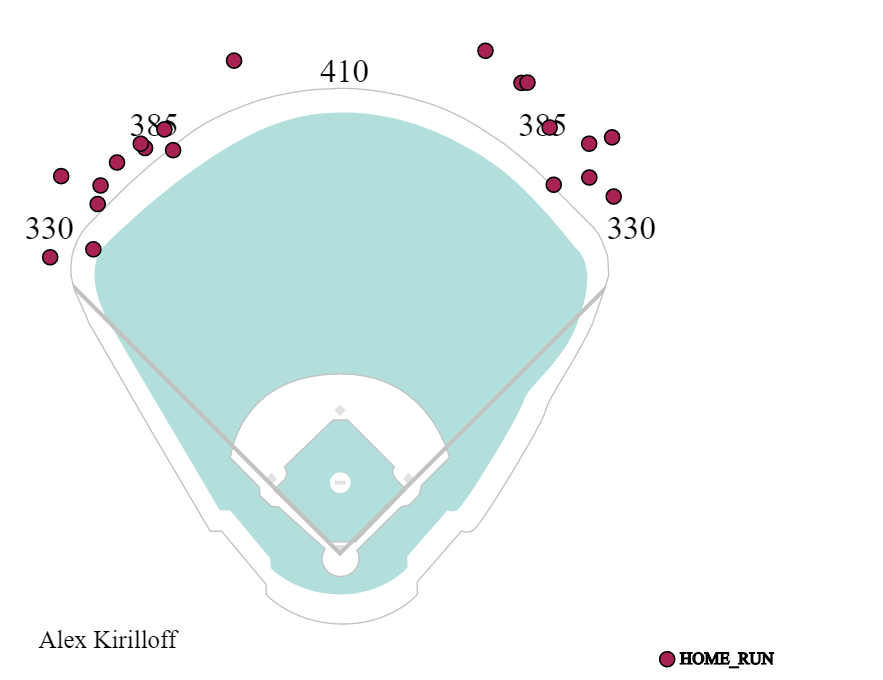 If we didn’t want to go completely gaga over Kiriloff, there’s enough in his 2018 profile to understand that he has plenty of growth remaining.  Let me clarify this statement by saying Kiriloff is still 2 years younger than most competition he’s seeing.  The cold water I am about to throw onto the gas fire raging within your heart and mine is to simply say that he’s not the next big thing. Heck, he might not even be the 8th next thing.

First off, I think it’s important to highlight that Kiriloff’s BABIP has yet to truly return to earth. While it’s not at the mind-numbing levels of 2018, he’s still boasting a +.350 line. Meanwhile, his HR/FB rate has shrunk to 7.4%. In addition, he’s slightly below average in pitches per plate appearance and swinging strike rates. Underscoring the raw approach is mediocre walk and strikeout rate. This amounts to a good player with an aggressive mindset that is learning how to handle advanced arms in a new level. Still, he’s hit gobs of doubles which has boosted his on-base and wRC+.

He’ll likely remain at Double-A for the remainder of the year to work through some of these growing pains. Over the final two months, I want to see him continue to grow with patience at the plate, hopefully turning those doubles in big dongs. Then, we can put a new spray chart over our beds and dream as we drift off.

In my mind, Kiriloff has the approach and modeling of Luis Robert, Cristian Pache, and Drew Waters–albeit without the speed–which is very good company to be in. He’s very likely not going be up next year. Max Kepler, Byron Buxton, and Eddie Rosario are manning a very strong outfield contingency with plenty of other players able to fill in along the way. Plus, while very good, Kiriloff isn’t forcing an issue for promotion to the next level like the other three names mentioned. I would expect an early 2020 debut if/when the Twins do not re-sign Rosario.

Kiriloff is, for my money, a top 20 prospect with plenty of argument to wiggle his way within the top 15. Remain patient and buy in where you can.  If you’re going for it this year and you have Kiriloff, don’t settle for less than him being a headliner in a deal within most league formats.