The Top 250 Dynasty Football League Players rankings are ready and being tweaked daily. They will be released in an early August post but you can get early access for just a $10 Donation. These rankings represent of the opinion of this writer and are made with Full PPR scoring in mind. They are also for single QB leagues, as QBs would receive a massive bump in 2QB or Superflex leagues. Below is a preview of two players, where they land on the rankings, and why they landed there.

If you and your dynasty team just can’t wait a few weeks, you can donate below to gain access to these rankings now:

Now, below are two player profiles heading into the 2019 season and where they landed on these rankings. Tyreek Hill has been the talk of the offseason and an extremely hard player to rank. The topic of incomplete information and media coverage has been tackled before. Not to boast too much but back in 2017 we told you to use the media circus to your advantage by buying Andrew Luck and Ezekiel Elliott. Tyreek Hill’s buy low window may have closed now that there is no impending suspension, but he still makes an interesting case and will have an extremely volatile price depending on the league and owner so he is definitely worth price checking in your league.

James Conner came out of nowhere to surprise even the Steelers in replacing Le’Veon Bell and whose contract was cheaper for them over a full season than Bell would have cost for one game. His mediocre pedigree mixed with the departure of Antonio Brown and a new look Steelers offense make him an interesting player to rank in dynasty as he heads into his age 24 season.

Tyreek Hill’s offseason has been tumultuous to say the least. It has been difficult to place him in dynasty rankings because his upside of the top WR in fantasy must be balanced with a number of factors working against him. The first and foremost being, of course, his off-field actions. The NFL has completed their investigation but are willing to re-open it should new evidence come to light. As a dynasty owner, there is legitimate concern of disciplinary action from past actions or new ones, but for the purposes of ranking him in dynasty, we won’t pretend to know everything about his personal life nor will we make predictions about future actions. Let’s take a look at other areas of concern for his dynasty value.

The biggest football related concern is his contract situation. Hill is in the last year of this rookie contract and there is no fifth-year option as he was a fourth-round pick (options are only available for first rounders). The Chiefs might be able to use the off-field drama as leverage for negotiating a team favorable long-term contract, one that Hill might himself be inclined to get done sooner than later. Much of Hill’s dynasty value is directly tied to this Chiefs offense and Patrick Mahomes. So, an extension would provide a boost in value and he would move into the top 15 overall players. If he was to go to another team, there are zero offenses in the NFL that provide him the same upside as the Chiefs long term. Andy Reid is one of the premier offensive minds in the NFL, and teams headed by Reid have finished in the top 10 in offensive scoring 12 times in his 20-year career. In addition, you have the opportunity to be paired up for your entire career with Patrick Mahomes, a man who has cemented himself among the NFL’s best passers after his first season as a starter. These two combined over a career give you the recipe that landed Hill as the WR1 in Standard and Half-PPR Scoring and WR3 in PPR.

A lesser concern is his efficiency. While he may be one of the greatest at scoring long touchdowns, Hill has managed just 11 receptions on 21 targets in the red zone over the past two seasons yet has managed 19 touchdowns. 10 of his career TDs are from 40 yards or more. While I don’t doubt Hill is exactly the type of player to score plenty of long touchdowns, if he was to move to another team in free agency his prime stat line might look closer to a Brandin Cooks or T.Y. Hilton, and its not long until you begin to slow down. There are plenty of players with size and/or weight were able to maintain fantasy relevance into their thirties, players like Joey Galloway, Mike Wallace, and Randy Moss. However, he will not be able to rely on speed alone as players with similar builds like DeSean Jackson and Emmanuel Sanders have faded from top 24 WR status as they moved past age 29.

With all of the risk baked in, I think the upside keeps him as a top 10 WR for dynasty with a chance to move up if he signs a long-term contract with the Chiefs. If you are not a contender, you might want to carefully weigh your options and tread lightly until that extension is signed.

James Conner performed well after taking over in place of Le’Veon Bell, finishing RB6 in PPR, and RB7 in Standard Scoring while participating in a Steelers offense that threw the ball 67.4% of the time (2nd highest in the NFL) and of which Conner hauled in 55 receptions. He also managed 4.5 yards per carry despite facing eight or more men in the box on 27.9% of his carries. Only Derrick Henry and Nick Chubb amassed more yards facing as many stacked boxes. So why is he 10 spots below industry average?

With the departure of Antonio Brown there are legitimate concerns over what kind of offense the Steelers will have. Offensive Coordinator Randy Fichtner is a pass heavy coach but has previously defended it by saying “I have Antonio Brown. Why aren’t you going to throw it?” One wonders what type of balance this year’s offense will have behind one of the top offensive lines in football. We can certainly expect a decrease in Pittsburgh’s points scored, but the Steelers remain a solid environment for RB scoring, especially in PPR. As long as he remains the workhorse back in the red zone, with that O-line he should be able to reach double digit touchdowns again.

The concerns are more long term: does Conner have the pedigree to remain productive as a workhorse against defenses that will likely be able to focus more on stopping the run now that they don’t have to worry about defending one of the greatest receivers of all time? What does a Pittsburgh offense look like if Big Ben retires? With just two years left on his rookie deal, does Conner become a long-term sign for the Steelers if his production to that point warrants a relatively large deal?

These questions are enough to place a lower ceiling than backs ranked in the range and a lower healthy floor long term. It would be hard to believe that even an exact repeat from last seasons statistics boosts his dynasty value into the top 20 overall, while there are a number of scenarios where he falls outside of the top 20 running backs. In a redraft league he is still playable in the early 2nd round, but his ADP over the last month in dynasty startup drafts is 19 overall. The cost is a concern because it is quite possible we have already seen the peak fantasy season from Conner last year. He is a sell for most dynasty teams aside from legitimate top teams who should find him useful in the short term. 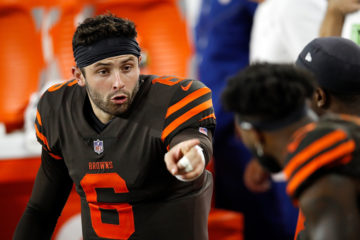 This Week in Dynasty: NFL Week 3