It may not feel like it, but Anderson has been in organized pro ball since 2009 when he was drafted in the 9th round by the Diamondbacks as a college prep arm from Oklahoma.  His time at Oklahoma was, like we’ll see with most of his career, pretty unremarkable and on the brink of ugly. Overall, Anderson held a bloated 5 ERA spanning across a little over 100 innings.

Anderson is a weird juxtaposition for that 2009 Diamondbacks draft: Keith Law ranked it as the best in baseball at the time and others viewed as overwhelmingly positive. Names like A.J. Pollock, Chris Owings, Keon Broxton, and Paul Goldschmidt have had plus WAR careers.  Still, it feels like – at least from a fantasy perspective – Anderson has been overlooked.

Tinkers, to evers, to Chase…

Perhaps it’s because he is worth overlooking. Yet changeup-first pitchers are the tapioca of fantasy pitchers. At best, you’re Kyle Hendricks, on average you’re Jorge De La Rosa or Marco Estrada, and at worst you’re Jason Vargas without the threats of violence.

His fastball, cutter, changeup, curveball repertoire have always been bland. In fact, Anderson’s 2014 fastball was one of the worst offerings in the last 5 years (per Fangraphs pitcher value), dwelling at a blindingly dark -15.3. His cutter and curveball were graded out as mostly below average over the course of that time as well. Meanwhile, his changeup graded out above average and notably effective against righties.

What’s interesting, however, and something that’s always pushed me to keep a watchful eye on Anderson lo these many years, is his improvement with the effectiveness of his pitches every year. Anderson has been a bit of tinkerer in his usage.  That said, if Trevor Bauer was Antonio Meucci, Anderson plays the role of Alexander Graham Bell.

Despite my slight, I do find hope in Anderson’s slightly overblown 2017 season. Anderson deeply cut into his fastball and brilliant changeup usage during the breakout campaign in favor of his re-defined cutter and curveball offerings.  The results were a sparkling 2.7 ERA with an increased K/9 and depressed HR/FB%.

Oddly, he slightly reverted back to his ways in 2018 and the results were blegh. His not so terrible fastball was valued the worst it had been in almost 5 years. His average-ish cutter – despite its increased effectiveness – was dropped in usage. He lost the feel of his curve and both the usage and effectiveness dropped off as well. Worst of all, he gave up a ton of dingers.

But hey! Guess what? Anderson has reverted back to the 2017 plan with a slight alteration to decrease the slider and increase in the changeup. The results are showing to be somewhere between the 2017 and 2018 campaigns, but I think Anderson has plenty of room for improvement. For the second time in his career, he has three pitches with a positive value.  The other time? 2017. He’s throwing the ball harder than he has ever before in his career, earning two ticks on his cutter and a tick on his slider.

Look, I still like Chase Anderson. He will never be 2017 Chase Anderson. Consider that a shooting star in the dark night of the starting pitcher sky. I think he’s a 3.95 ERA pitcher with an 8 K/9 rate. I think he’s a fine SP4 in a deep league you can rotate in and out of your lineup as the splits deem. HINT: NEVER START AT HOME.  If you’re in a shallower league, like a 16 team or less, and your pitching rotation is ravaged by injuries. You’re a boat looking for a port in a storm. You could do worse than Chase Anderson.

Tapioca pitching at its finest.

What the heck is going on with this giant man of a baseball player? Jesus Aguliar had seemingly broken out in 2018, and become a stud power hitting first baseman. He displayed a keen eye at the plate, and jaw-dropping bombs. Yet, through 2019 he has been absolute dead weight at the position. He has failed to hit for either power or average, and has caused many owners to move him in a trade or to the waiver wire. So what’s the right thing to do with the struggling first baseman? I am going to try and help you out.

Last season Aguliar murdered baseballs, crushing 35 long balls and posting an ISO of .264! That power wasn’t pull-power either- it was to all fields. 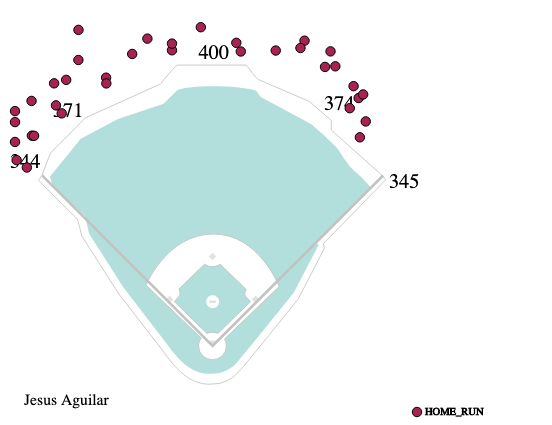 He finished the season in the top 9% of the league in WOBA, barrelled pitches up at an 11.4% clip, and posted a .890 OPS. By most offensive metrics, Aguliar was a beast. What was the big change for the right-handed masher?

Essentially it came down to playing time. Aguilar had been rotting away in the minors, and then given limited at-bats. Treated as a platoon bat initially, Aguliar posted strong numbers against right-handed pitching including a .272 AVG in 2018. That was a .30 improvement from his limited at-bats the previous season, and certainly should be enough to shed the label of platoon bat.

This season for Aguliar has been absolutely baffling. Let’s take a side-by-side look at the beefy man’s 2018 vs 2019.

One of those years looks stellar, while the other one looks pretty much like complete garbage. Now that we’ve checked out the surface numbers let’s go a little deeper.

The reasons for Aguilar’s struggles start to make themselves slightly more apparent in the numbers above. The plate skills remain strong, but our big beefy boy can’t seem to muster his usual amount of strength. Now figuring out why he’s unable to smash baseballs quite the way he used is the major struggle.

So many numbers look similar when examining Aguliar’s approach at the plate, and how pitchers are approaching him. He’s not seeing a different pitch mix from the previous season, he’s remained very patient at the plate, the strikeouts remain under control. The quality of contact is the biggest difference.

The fall in launch angle seems to have resulted in more topped groundballs. There’s likely a swing adjustment that needs to be made here. At first, I was tempted to say that the Miluakee slugger was playing through an injury, but his exit velocity remains in line with the previous year. The biggest hint for me then is the decline in average launch angle and an increase in ground balls.

The value of this heavy hitter is in the trash. At this point getting anything useful from Aguliar would be a dream, and you certainly won’t be able to trade him for anything. There’s hope here if Agular can make the necessary adjustments, but at this point of the season his owners (myself included) must be getting very tired. Worth only holding on to in the deepest of leagues, it’s time to let this dinosaur become extinct.

Major Prospect In The Minors

Drafted 9th overall as a 20-year-old out of UC Irvine, Hiura was a polished college bat that had expectations of moving quickly through the minors by riding his strong hit tool. His hit tool drew unanimous 70 grades from MLB, Baseball Prospectus and FanGraphs, and his remaining tools drew a mixed bag of average to slightly above grades. The thing about a good hit tool, though, is that it helps other tools play up, and the potential of Hiura had/has fantasy owners salivating.

Two years after being drafted, that’s exactly what happened. Debuting in Rookie ball after being drafted in 2017, Hiura slashed a wild, .435/.500/.839, and after 15 games was promoted to Full-A. He finished his pro debut there, slashing .333/.374/.476. His first full season in 2018 was just as successful and his power started to show too, launching 13 homers in 123 games. The season ended with Hiura reaching Double-A just a year after being drafted.

Hiura Him Loud And Clear

Entering 2019, now his second full season and Hiura began the campaign at Triple-A and continued to show improvements all over his stat line. Keeping in mind that it is the PCL and that Triple-A is using the same ball as the MLB, Hiura has blasted 18 homers already in just 55 games while slashing .324/.403/.672. Looking at his three seasons in the minors, he has amassed an OPS over 1.000 in two of them. The dude just rakes. Thanks to some poor performances and injuries on the major league squad, Hiura was able to poke through to the majors for his first cup of coffee earlier this season and stood tall to the task, slashing .281/.333/.531 in 17 games while adding 5 dingers and a steal. Naturally, there were some initial pains, as it was his first taste of the bigs: for example, his 33.3% strikeout rate was way too high and his 3.8% walk rate was way too low. Overall though, he more than held his own so it has been a bit more than a disappointment to see him continue to rake in Triple-A while Travis Shaw and Jesus Aguilar continue to struggle.

Hiura Me Out Now

While it was/is incredible annoying Hiura was sent down once Shaw returned, it shouldn’t be long before he gets called back up. As the Brewers continue to contend and they need to play their best players, right now the right side of their infield is a black hole at the plate and Hiura can offer a spark to the line-up. As far as fantasy goes, if you own him be glad, and hold through this annoying time. If you don’t own him, well that’s kind of a bummer, but I wouldn’t mind taking a shot at him, knowing I’m going to need to pay through the nose because I think he’ll be worth it.