Last year, Freeland finished 4th in NL Cy Young voting after working a solid 2.85/3.89 DRA over 202 innings with a very unsatisfying 7.7 K/9. Pouring over his pitch mix it’s pretty clear he did two things. First, he emphasized his four-seam fastball and changeup while peppering in his slider. Second, he heavily deemphasized his sinker. 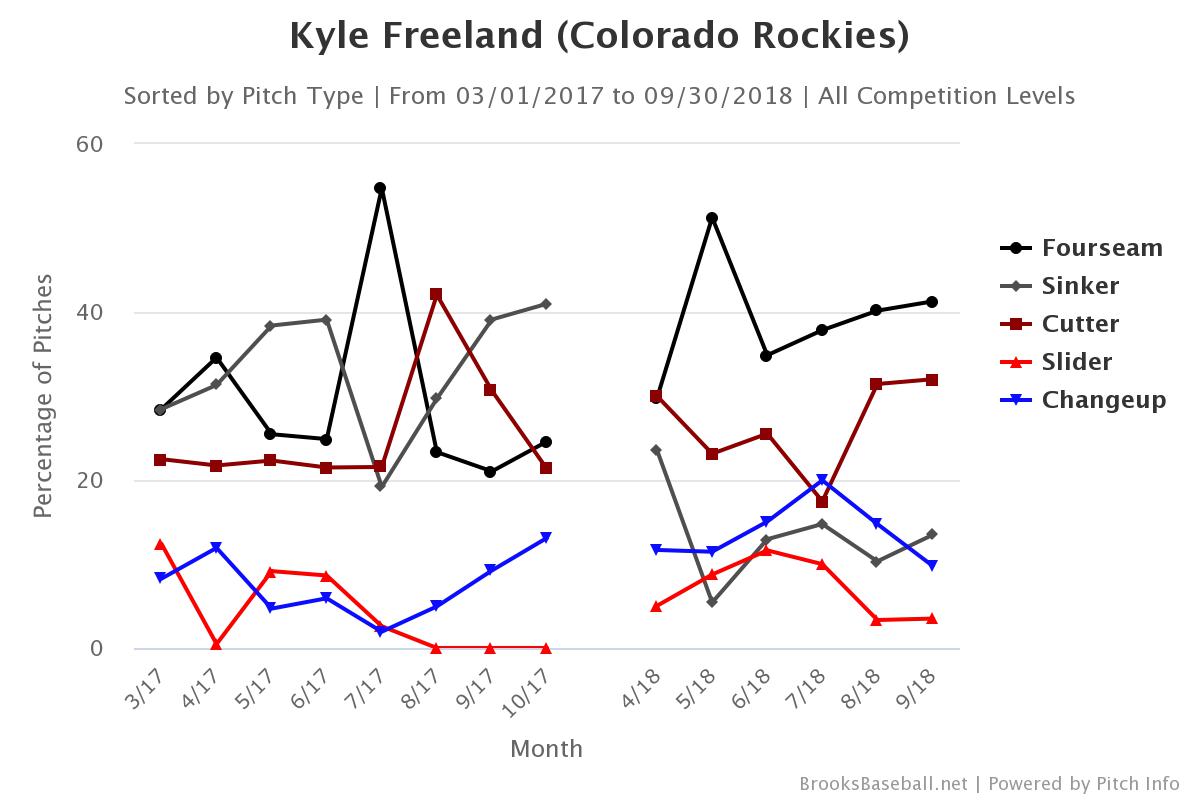 This, in case you couldn’t tell, was a very smart move. The four-seamer went on to post an 18.5 wFB (7th best in the league). Better than Aaron Nola, David Price, or Jose Berrios. Oddly, however, the changeup was still pretty bad, posting a -2.7 value. That said, the lynchpin was his slider. Something my boy Marquez began to emphasize as well. This is likely not a coincidence but rather a change in organizational philosophy.

While certainly not elite, the slider was respectable. Reviewing Alex Chamberlain’s amazing pitcher leaderboard, Freeland threw his slider to the tune of a 2.52 FIP and a 24.7% K-BB. Still, it was merely average. Of those pitchers who threw over 800 sliders in 2018, Freeland’s SwStrk% was barely better than Jhoulys Chacin or CC Sabathia’s. His O-Swing Strike Rate was bottom of the barrel as well, posting a 7.6% rate. The pitch would have enjoyed better outcomes had he actually used the offering in different locations. Sadly, he kept it in one spot for a majority of the time and very few batters were chasing. In other words, his wipeout pitch was anything but that, and the usage was more to keep hitters off kilter.

His 2019 has been a bit of the regression everyone expected thus far. A 9.76 K/9 keeps things a bit interesting and the underlying metrics say he’s better than the 4.23 ERA. Remove the one bad start against the Braves at home – an appearance where he gave up 7 earned over 5 innings – and it’s a pretty respectable line. Yet we all know that you can’t take away Coors and if you’re in weekly leagues, Freeland’s value takes a nosedive when you’re unable to maneuver around certain starts.

Still, the pitch mix he offered last year is still in vogue. Now, it’s just a matter of bringing the location of those pitches to something that consistently works him. Looking back at Mr. Chamberlain’s leaderboard we see the splits against lefties are alarming.

This is likely because Freeland continues to foist the four-seamer towards the outside of the zone when it should be coming in on the hands. Again, I understand it’s small sample size, but I want my pitcher locating all over the zone to keep the batter guessing, not setting up shop and letting them feast off of one side of the plate. As you can see below, Freeland did that with some success last year and he needs to re-educate himself on last year’s success. If he can start doing that now, he’ll regain the magic of 2018.

From a dynasty perspective, I do not see any reason (BUT COORS YEAH YEAH) that Freeland couldn’t regain a 2018 lite-form. If people are skittish about his current line and didn’t buy into the hype, now’s the time to kick the tires. As I mentioned before, he’s had 1 bad start of 5 that has currently sunk his line. Still, I’m not sure you should expect more than not-quite a K/9 out of him.  This makes him an SP3 in most places with the possibility of an SP2 in his better years.

In short, solid with flashes of spectacular peppered with the occasional clunker. Welcome to almost every pitcher in 2019!

Here’s a Story, about a little guy who lives in a purple world, and all day and all night and everything he sees is just purple, like him, inside and outside. Purple his field, with a purple little dugout and purple bullpen cart, and everything is purple for him and himself and everybody around because he ain’t got nobody to listen. OK, for real now apologies for the fact Eifel 65 is now stuck in your head but, it’s fitting. Story has been putting up loud numbers for a couple of seasons now and yet still seems undervalued, hence the nobody to listen. I present to you now, my pitch, (song references are over now I promise) for Trevor Story as the number 1 Fantasy Short Stop in the game right now.

Trevor Story gave us an immediate glimpse of his potential when he made his major league debut in 2016, launching 27 homers and swiping 8 bags in 97 games. He added a pretty decent slash line to go with it (.272/.341/.567). The biggest blemish on his impressive cup of coffee was his sky-high 31.3% strikeout rate. Coming into his first full season in 2017 he had extremely high expectations that were hampered by a strikeout rate that actually increased instead of decreased-his 34.4% strikeout rate was in the bottom 2% of the league. It seemed like the strikeouts would always be there and be a major problem, as it ended up taking away at-bats from the youngster by the end of the season. Then came the breakout. In 2018 Story slashed his strikeout rate by 10% and had his best quality of contact numbers that ranked in the top 8% of the league. Now I know here is where people start yelling “BuT hE pLaYs In CoOrS, nO sHiT”, Well in fantasy, that’s a good thing so those idiots yell into the abyss. It doesn’t matter how he’s getting the numbers: what matters in fantasy is that he gets them. Story very nearly went 30/30 last season and there’s only one other shortstop that can challenge for those numbers and that’s Francisco Lindor.

Story Of The Tape

Get it? Because it’s like a tale of the tape, but his name is Story. A tale is a kind of story, you get it. Comparing the 2018 season for Lindor and Story in a standard 5×5 Story wins 3-2 with better numbers in steals (by 2), average, and runs batted in, and Lindor taking runs and homers (by 1). If you play in OBP leagues then Lindor won 3-2, out-OBP’ing Story by .004. Suffice to say last season was pretty darn close between the two. In our own Shortstop rankings for 2019 we had Story 4th behind Lindor, Machado (who will be only 3B eligible next year) and Trea Turner. Turner’s carrying tool is obviously his steals, but that’s really the only thing Turner has over Story and shouldn’t be ranked ahead of him come next season.

Now it wouldn’t fair to compare how Lindor and Story have performed this season since Lindor has only accumulated 8 games due to an injury sustained in spring training, but I dissected Story’s performance and project a little, so I think I will. Thorugh the first month-plus of the season Story has increased his impressive quality of contact from a year ago and is top 5% in the league in hard-hit rate. His exit velocity of 92.5 MPH is the highest of his career by 2 miles an hour, and his launch angle is a cool 18 degrees. Both of those numbers are significantly over the league average. Perhaps even more importantly, he has not seen a regression in his strikeout rate and it’s exactly in line with his improvements from a season ago. With the increased quality of contact, Story is currently having his best season in terms of average, hitting over .300. On top of that, he’s already racked up 6 steals and 7 homers and is well on his way to an incredibly productive 30/30 season. Even without Lindor starting the season on the IL, the improvements he’s continued to make in his quality of contact lead me to believe Story would begin to put some space between him and Lindor at the top of our Short Stop rankings.

Colton Welker was selected in the fourth round by the Rockies in 2016. Fourth round picks aren’t necessarily something to get excited about, but Welker isn’t your typical fourth rounder. Fangraphs has Welker littered with half grades, but he’s performed exceptionally well thus far in the minors and you have to wonder if some of those 55 grades are actually 60. For instance, he was on his way to leading the South Atlantic League in average, on-base percentage, and OPS. There’s real potential that Welker becomes an All-Star caliber player. Put the potential in Coors field, and things start to get really exciting.

Despite a swing that can get long, Welker has shown the ability to make tons of contact thus far in the minors.  His highest strikeout rate came in 2018 when he played in High-A, but it was still a respectable 20.2%. Meanwhile, his walk rates have not been elite, but he’s walked enough that I’d feel comfortable predicting he’ll do so at a league average rate. Along with solid plate skills comes emerging power from the 21-year-old third baseman. Welker managed to knock 13 balls over the fence in 2018 and posted an ISO of .156. While that’s not power that screams elite upside, it’s enough to get excited about the young third baseman. Oh, and in addition to Welker’s budding power, there were a handful of steals (5).

So far in Double-A Welker has continued with similar production to his 2018 campaign. In 84 at-bats he’s slashing .325/.369/.494 with three home run and four doubles. Welker appears to have all the tools necessary to compete in Double-A and should make for a stable and safe prospect on your farm. He’ll likely see Triple-A before the end of the year, and I’d expect to see him in the majors by 2020. That may be as a September call-up, but it’s also very possible that Welker forces the hand of the Rockies and he gets called up earlier. This, of course, all depends on service time manipulation, but from skills and projections standpoints, I believe Welker will be ready for Major League action in 2020.

The glaring issue for Welker is his current position. The Rockies locked up Arenado for eight more years, and if you’ve seen Arenado play defense, you know he’s not moving off of third base. The Rockies, while not owning an elite farm system, do have a ton of offensive talent, in both the infield and outfield. In order for Welker to get a shot, he’ll need to either move across the diamond to first base or a corner outfield spot. Outfield may make more sense for Welker as he posses a strong arm and it wouldn’t go to waste in a corner spot.

Regardless of his future position, this is a profile that demands your attention. Potential plus power, a handful of steals, and the ability to produce strong ratios in Coors field. Welker essentially checks all the boxes of an interesting offensive prospect. One that is potentially undervalued by his current owner, and absolutely worth price checking. Don’t count on him being your future third basemen, but acquire him and hold as he’s rather close to the majors. Act sooner than later as he won’t fly under the radar for much longer in most dynasty circles. Get hyped!