Well, actually not really. It was Cole’s teammate at UCLA Trevor Bauer that actually won the Golden Spikes award in 2011, but even though Bauer won the award Cole was considered the better prospect and the Pittsburgh Pirates made him the first overall pick in the draft in 2011. Cole was as polished as a prospect could be and ended up making his pro debut almost exactly 2 years after being drafted, which is rather impressive for a pitcher. Cole had some decent success with Pittsburgh, anchoring a pitching staff full of potential, but never quite reaching his ace potential. Sur,e he was the number one starter for Pittsburgh every year he was there but in terms of the output, it often felt like he was leaving something on the table. Especially with the strikeouts- in his 5 seasons in Pittsburgh, Cole was only able to muster an 8.4 K/9.

Ratchet up the Ks

When Houston acquired Cole, they encouraged him to use his secondary pitches more and not rely on his fastball as much which lead him to have tremendous success. Not only that, but they also unlocked the magic of spin rate and pitch efficiency and Cole really took off. It’s incredible to look at Cole’s charts on spin rate and whiff rate too because not only did they take a jump from 2017 to 2018, they took ANOTHER jump from 2018 to 2019. 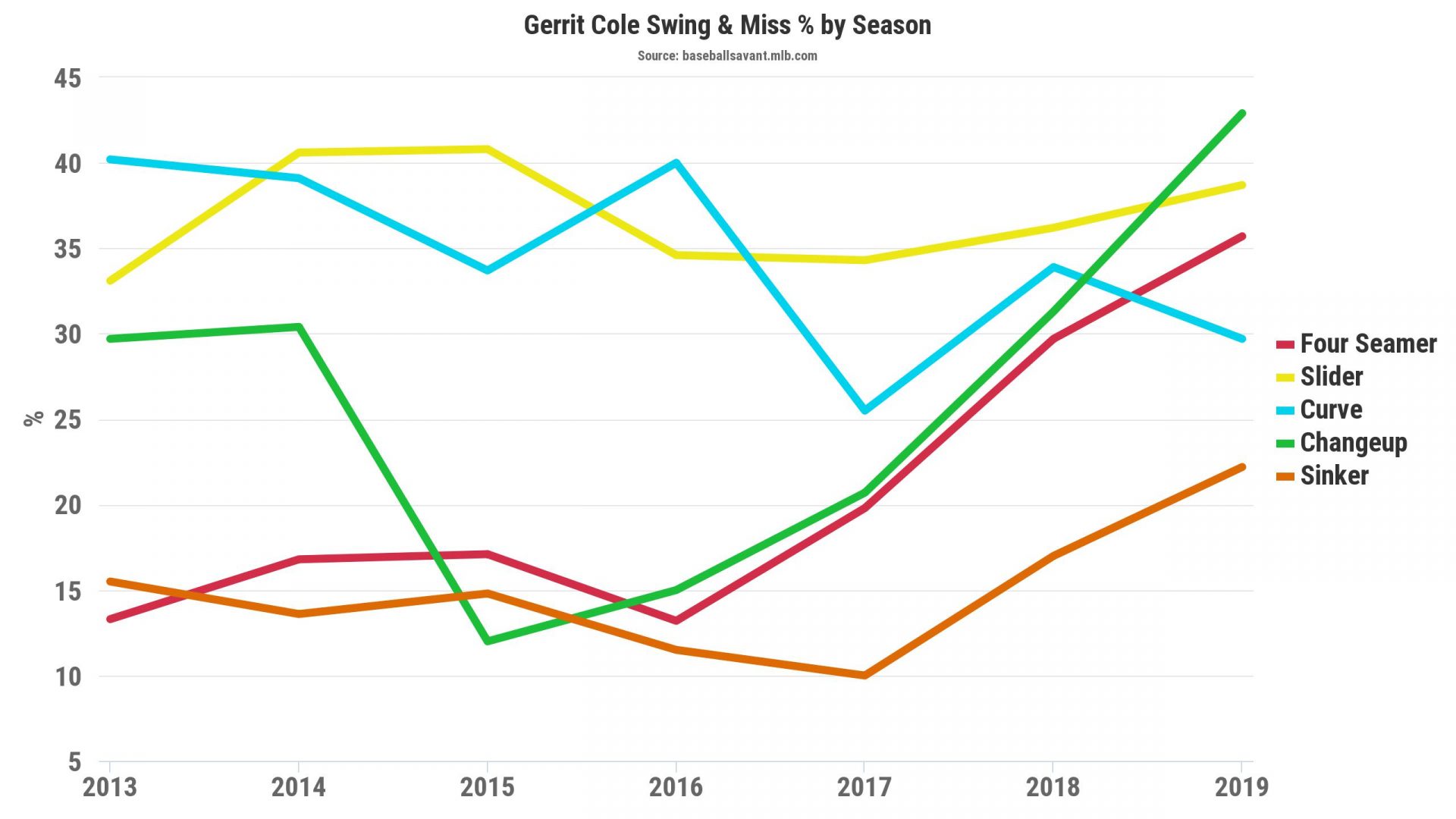 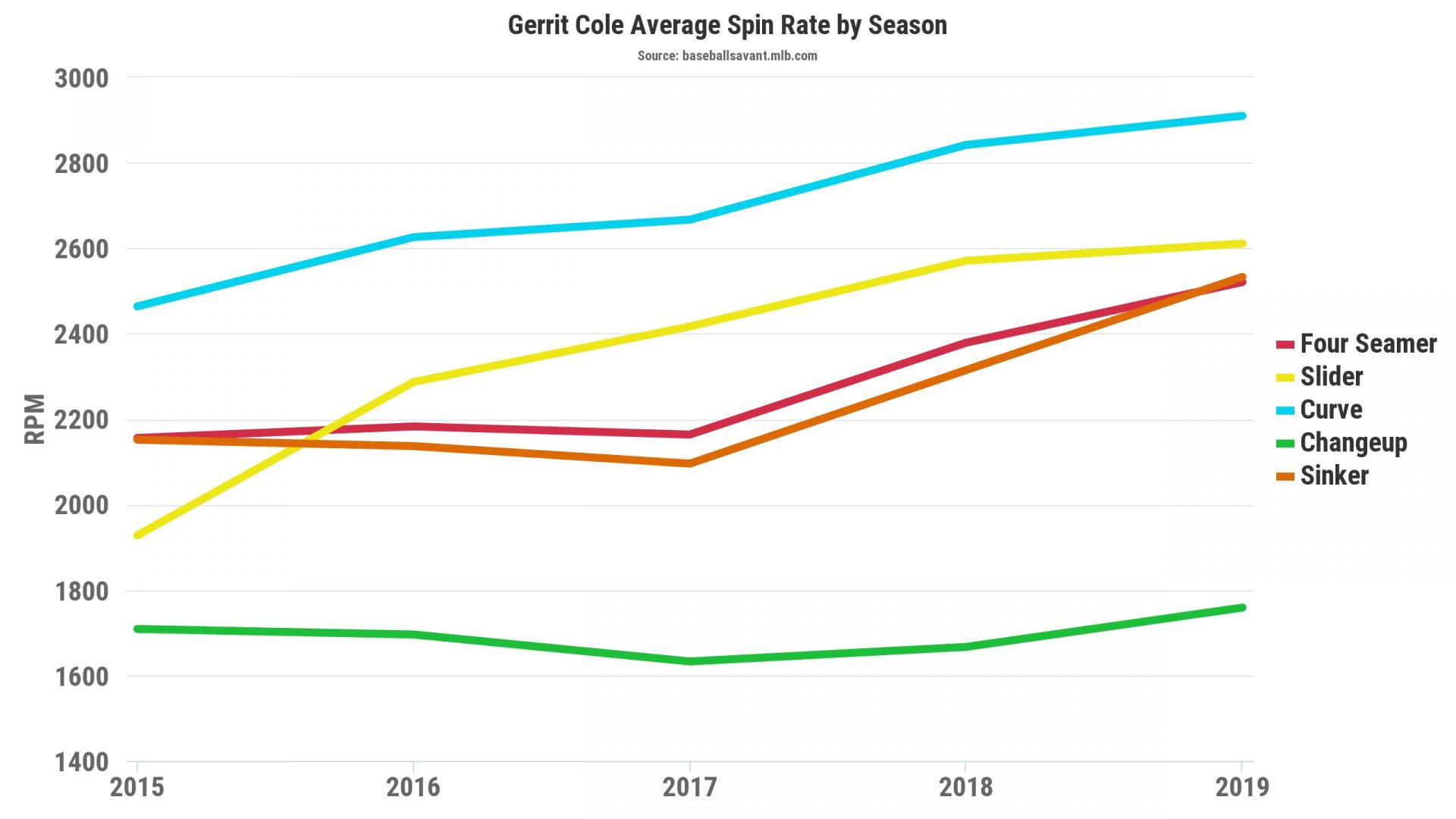 And it shows in the numbers as well. In Cole’s first season in Houston, his K/9 jumped four strikeouts to 12.4 and this season it’s up another strikeout and a half to 13.9. This is indeed the Cole that promised coming out of UCLA. Not only is Cole just striking out more batters season over the season, but he’s also seen the most significant drop in chase contact this year. He’s been doing a more impressive job of not only using all of his pitches but sequencing them and getting batters to chase out of the zone, which has ratcheted up his whiffs in 2019. That jump has put his strikeout rate in the top 2% of the league. That’s pretty damn good.

Much like Cole’s strikeouts, his rank took a huge step forward in 2018 going from 24 to 10 in our pitching rankings. Still, at a ripe young age of 28 and knowing the aging curve of pitchers is rather friendly, Cole’s rank is going to continue to take another step forward going into next season. If you were lucky enough to be a Cole owner prior to the blow-up, good on you, It’s going to take a whole hell of a lot to acquire him now but he shows no signs of slowing and should be a force on the mound for years to come.

The diminutive second basement has been a key cog in championship dynasty rosters for the last 5 years. He was Ozzie Albies before Albies was the new Francisco Lindor. In other words, he was a contact-first speedster who tapped into previously unknown power. During the 2016 and 2017, the latter wherein he won the AL MVP, you couldn’t find a better argument to unseat Mike Trout as the unanimous #1 overall player in dynasty formats. At that point, he had achieved 5 straight seasons as a league leader in at-bats, hits, stolen bases, average, and on-base percentage.

Last year, everything went to hell in a handbasket. Altuve was literally playing on one knee for a majority of the campaign after sliding into second base during a game in July. The knick required an IL stint and he didn’t really regain form. During the playoff run, you could actually see the pain endured by Altuve when he was attempting to get out of the batter’s box. All this to say, nobody should have been surprised by a decreased power output and his first sub-20 stolen base season since 2011.

In case you’re suspicious about the theory that his one-wheel mitigated the power/speed combo, below is the rolling graph of Altuve in 2018. Take a guess where the injury occurred and whether or not he truly recovered. 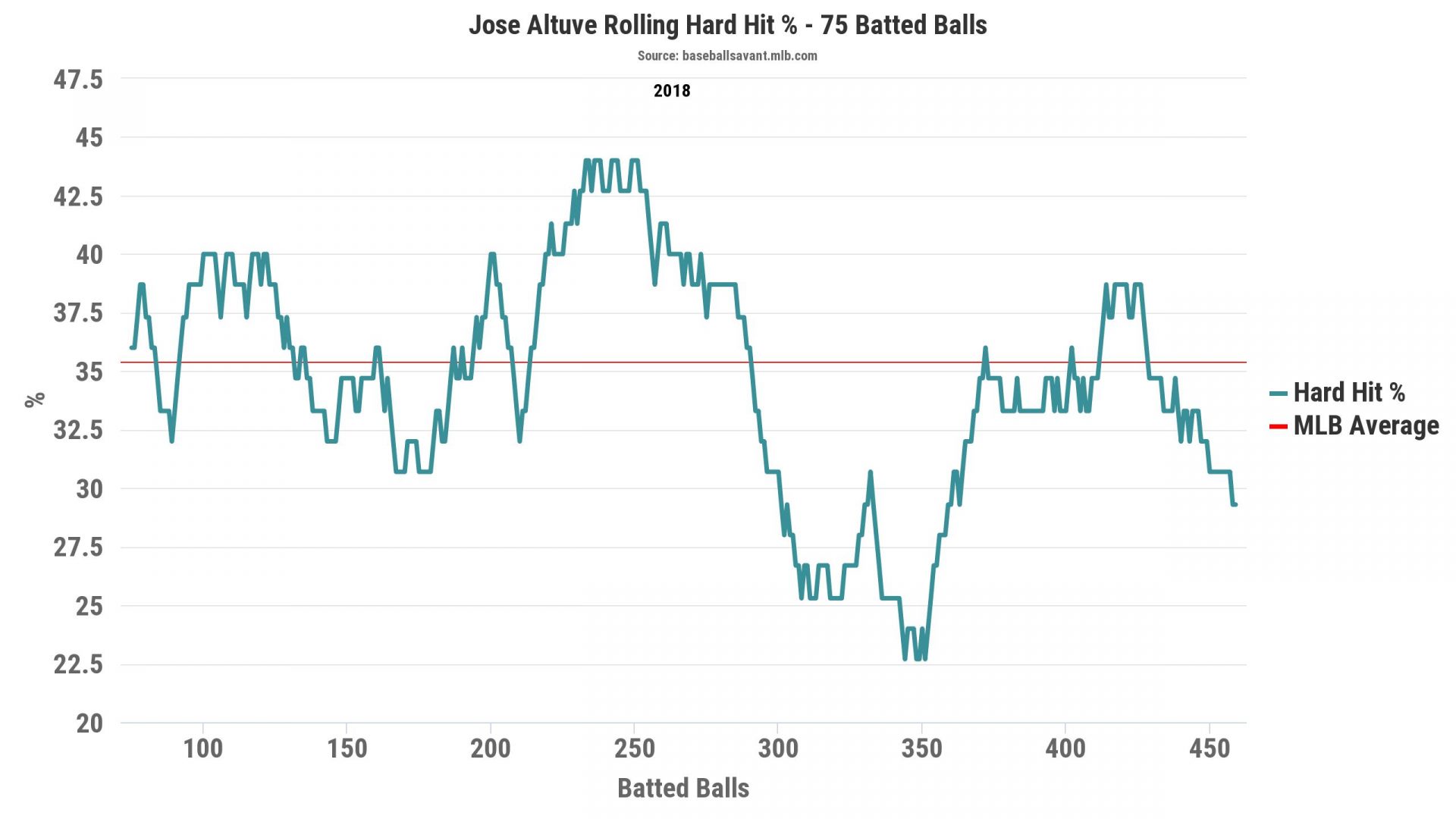 Still not convinced? Take a look at his 2018 wOBA chart: 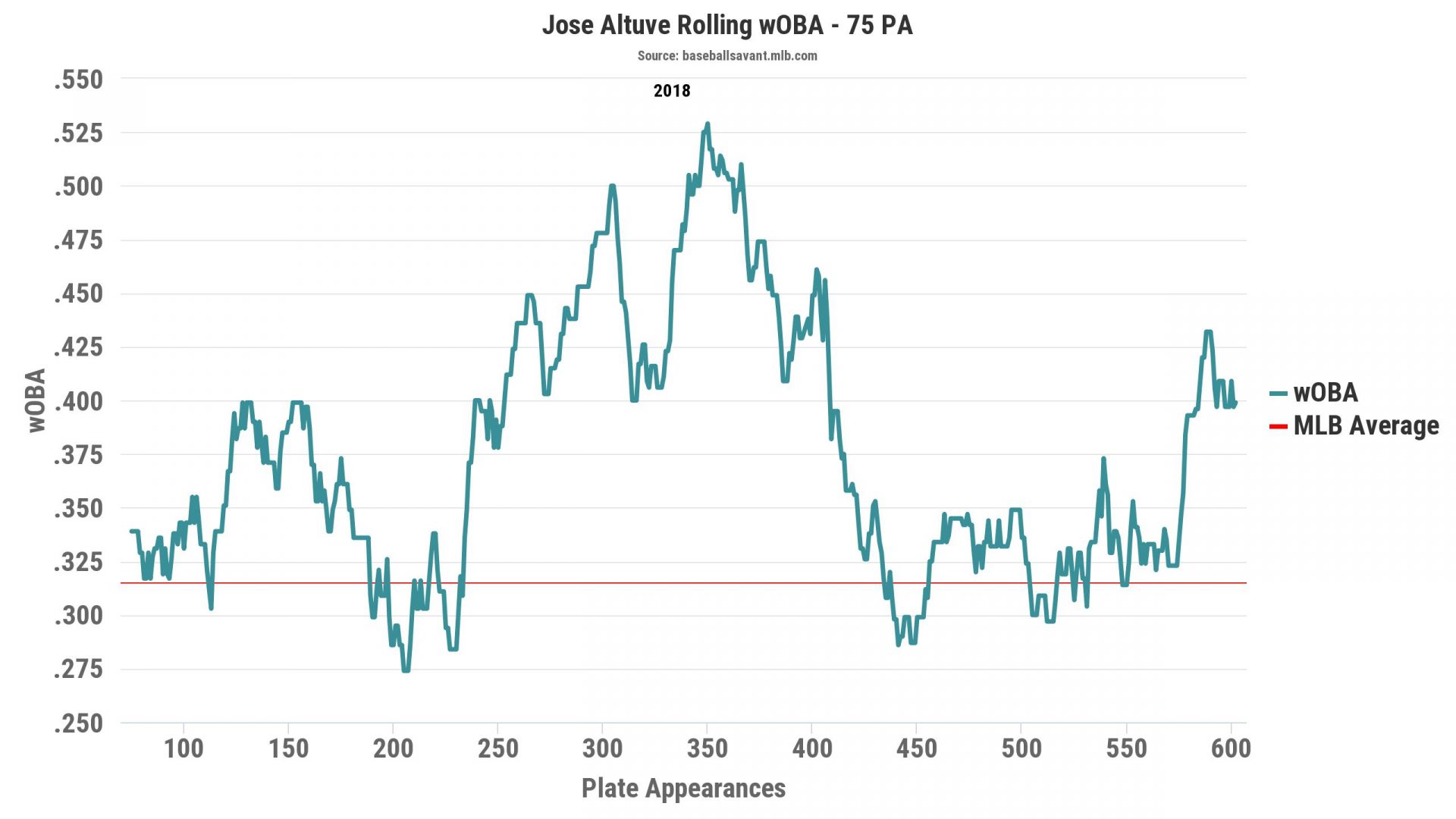 While it ticked up in August, he never recovered and – when the off-season surgery occurred almost as soon as the season ended – it solidified the point.

Still, everyone can have an injury-plagued season. It happens. Even to Mike Trout. Does that mean we shouldn’t be optimistic about 2019 and the next few seasons ahead?

At the time of this writing, we’re entering mid-May.  Starting the season, Altuve (29) was using “best shape of my life” speak to play up his health and excitement for the coming season. He had the surgery and people were maintaining optimism.

Sadly, the results haven’t quite taken hold yet. He’s hitting .243 with an xBA of .249. More concerning, he’s been caught stealing (2) more than he’s actually stolen a base over ~150 ABs. Still, there’s reason for optimism. First of all, he’s elevating the ball higher than he ever has in his career and he’s barreling up on the ball more than he ever had previously. This largely speaks to the record pace for Altuve in the home-run category and the better-expected metrics for on-base and slugging metrics calculation.

So is he simply swinging for the fences as opposed to smacking the ball for a hit? Probably, as seen in the graph below:

Clearly, he’s pulling the ball more than he has in the last 3 years, but perhaps the hit spray chart would paint a clearer picture: 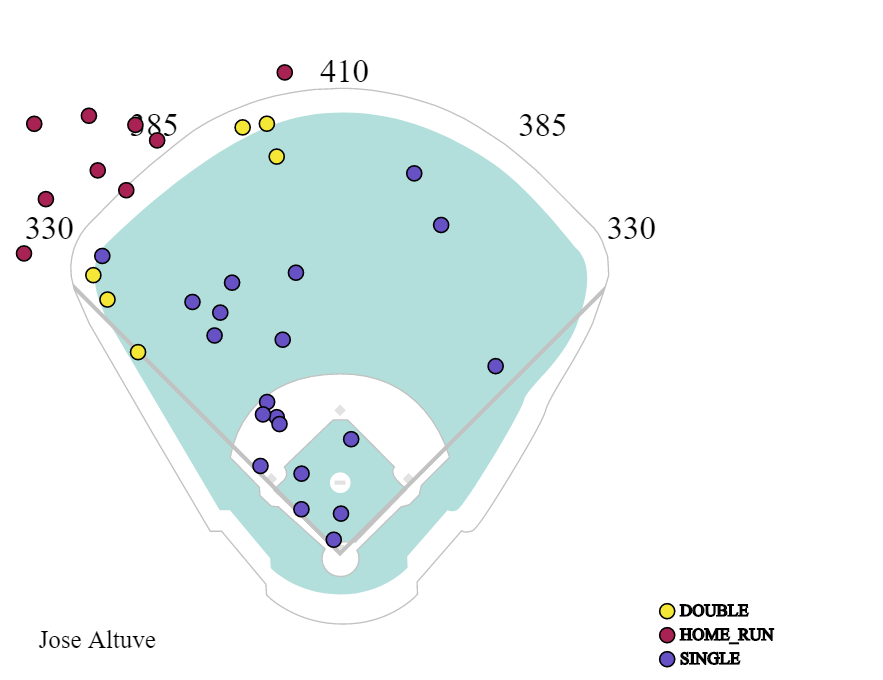 In other words, of his 35 hits, only 8% have gone to the opposite field.

Built Like The Mud Brick (Dynasty value and closing)

Look, there are legitimate reasons to be concerned. The general mantra of a dynasty owner is to get out from under a fading asset, especially one that is a household name. We need to take stock in the following:

(1) He’s in his age-29 season, but the Astros regard him highly enough to have him signed through his age-35 season. Clearly, they see a path for him to age somewhat gracefully. Although I have my doubts. See Pedroia, Dustin.

(2) For 6 straight seasons (2011 – 2017) Altuve was never on the Injured List. On May 12th, he found himself there for the second time in as many seasons with a bad wheel. The will undoubtedly affect his ability to steal bases for another season. Expect only 15-20 bags – at most – moving ahead.

With those two items in mind, coupled with his hit profile this year, expect a transition in Altuve’s profile almost immediately.  To be clear, he will hit the damn ball. The questions we must ask ourselves: “What’s his value with diminished stolen base potential” and “will he go back to being the doubles machine he was prior to 2018?”

I have my doubts. Since 2008, there have been only 13 players 30 years or older that have been within the top 5 in doubles. Brian Roberts – a guy who totally was not juicing… for sure… showed up twice. Other names like David Ortiz, Albert Pujols, and Miguel Cabrera do not match the body type or hit profile of the undersized second basemen.

To reiterate- I have my concerns. Last fall, Jesse Roche ranked Altuve as a top 20 dynasty asset. Analyzing the data we have before us, I feel like that’s a bit too optimistic and I’m struggling to find a place for him within the top 50 moving ahead.

[The fact that Adam’s intrepid editor moved Altuve in a deal for Merrifield in no way affected his analysis of Altuve. But it is an opportunity to brag because everyone was down on me for it and I AM A GENIUS- Ed.]

The community’s eyes are fixed on Alvarez as we wait with bated breath for the arrival of the young outfielder/first baseman. While perhaps not at the top of the list for call-ups at the beginning of the season, Alvarez has simply smashed his competition in Triple-A and is now demanding a chance at the majors. Houston does possess a stacked roster, but DH has been a rotating door, with Tyler White failing to establish himself as an everyday player.

Last year Alvarez had himself a very solid season. He saw two levels (Double- and Triple-A), and spend approximately the same amount of time at both. Alvarez managed to smack 20 round trippers, steal 6 bases, and slash .292/.369/.524. He demonstrated strong plate skills at these levels as well and was well below the average age for both levels. The strikeout rate got up into the mid-20s, and so there is a bit of swing and miss in Alvarez’s game and I expect to see some of those tendencies exaggerated when he gets his first cup of coffee. While he did not show the outright dominance he’s demonstrated in Triple-A this year, he kept up and did well with his first tastes of more advanced pitching.

Currently, Alvarez leads the Pacific Coast League with an astounding 222 wRC+, which is 28 better than his closest competitor.  Let’s zoom in a little closer to Alvarez’s numbers just to put in perspective how dominant a force he’s been. In 143 at-bats he’s already mashed 15 homers, 12 doubles, posting a ridiculous .467 ISO, and that power is utilized to all parts of the park. 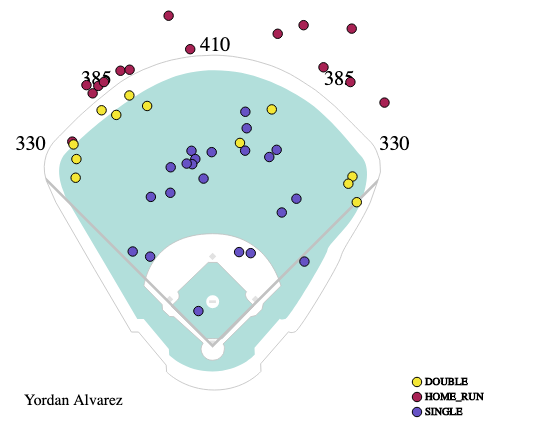 Now can we count on Alvarez to continue to slash .402/.490/.869? No, but he’s clearly demonstrated that he’s reached a point in his development where he is ready for the next level. Those numbers, while unsustainable, are backed up by solid plate skills (14% BB 20.3% K), and while the PCL has a way of inflating offensive numbers, the plate skills and ISO suggest to me that he’ll continue to rake until he gets the call.

It’s unlikely you’ll be able to acquire Alvarez for anything less than a stud player at this point. He’d be a great target for those selling off parts of their squad and rebuilding. For what it’s worth the profile is worth investing in, on a competing team, with position flexibility (DH/1B/OF). Alvarez has performed so strongly that I wouldn’t doubt that once he arrives in the majors that he’ll hit the ground running with a small amount of time spent adjusting his K%. Thus far Alvarez has shown that he’s capable of adjusting to higher levels of competition, and while the Show has a way of humbling players (See Vlad Jr.) and no prospect is a sure thing, I’m a big believer in Alvarez.   Buy with confidence (if you want to spend $$$), or enjoy the spoils of dynasty baseball.