Yep. Equipped with a devastating slider, a curve with potential, and a mediocre but well-located fastball. There is yet another Indians’ starting pitcher who needs to be on your radar, Shane Bieber.  Not equipped with much velocity, location is key in order for the young hurler’s stuff to play up at the Major League level. Bieber’s pitches get crushed if they are left in the strike zone. Indeed thus far in 2019, Bieber has had the majority of his success by getting hitters to chase his pitches outside of the zone. 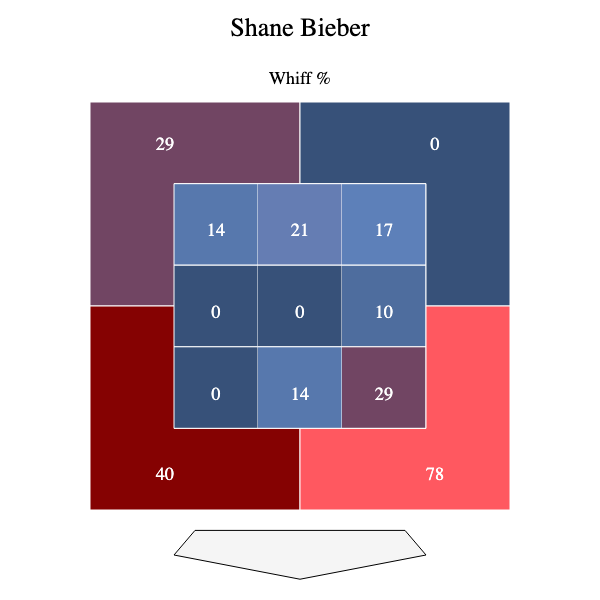 In general, Bieber has focused his pitches down and away from right-handed hitters, primarily trying to generate swings and misses here with his slider and curveball. His slider gets a ton of ground balls and whiffs, and thus in this location it’s a great put-away pitch. Can he continue to utilize this kind of sequencing for success?

A control pitcher who averaged less than a K/9 throughout the minor leagues, Bieber arrived in the majors in 2018. The final results for the Indians’ starter were not anything to write home about (4.55 ERA in 114.2 IP), but his command remained elite (top 6% of the league in BB%) and his K/9 ticked up. Bieber’s FIP, xFIP, SIERA all suggested that he was unlucky as they were more than a run lower than his ERA. Making him a typical sleeper coming into the 2019 season. However, there are some red flags in Bieber’s profile.

For instance, he gets beat up when he pitches into the strike zone. Last year he finished in the bottom 9% in exit velocity. Bieber relies on movement and not velocity to be successful, and thus he can get burned if he’s forced to pitch in the zone. Batters will always be able to get to him as he just doesn’t have the velo on his fastball to generate swings and misses within the zone. However he is using his curve in the zone, and the results have been a more effective pitch this year. 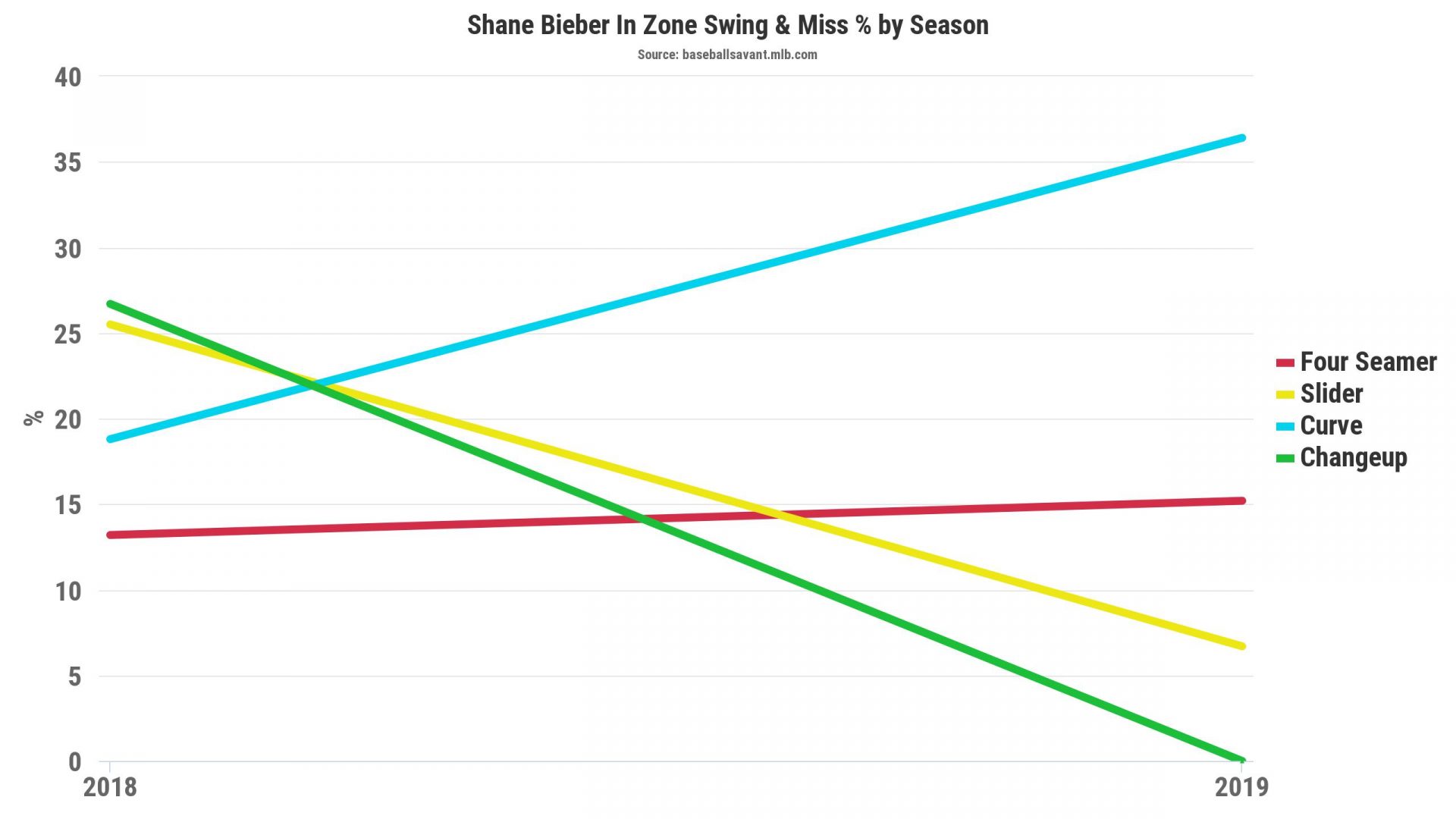 In order to reach his full potential, Bieber must use his curveball effectively.  Right now it’s sort of a mixed bag. Throughout Bieber’s first four starts of the season, the pitch has generated the second largest number of whiffs, yet has also missed the zone quite a bit (it has a 22.2% BB rate). That’s not too surprising as curve balls are often thrown out of the zone. Its success in the zone, though, gives Bieber a much-needed weapon. Hopefully, he continues to refine and build on the success he’s having with his curve.

I’m encouraged by Bieber’s increased use of his slider as well in 2019. Pitchers throwing their best pitches more is a trend we’ve seen throughout baseball, and typically has induced positive results for most pitchers. Thus an increased usage of secondary offerings, combined with a decrease in the use of a fairly boring fastball, is a positive.

Should You Catch the Bieber Fever?

Bieber is an SP3 with SP2 upside, and he’ll pitch like an ace on occasion. However I’m not convinced he’s the second coming of Kyle Hendricks, and I worry about him not having a strong fastball that he can blow by hitters. His reliance on getting hitters to chase and a lack of a true fastball put a cap on the success that Bieber can achieve. Personally, I’d be wiling to take the risk on him in most leagues, but the price is likely that of an SP2 or SP1 given his strong peripherals from 2018, and his strong start here in 2019. I’d recommend selling high or holding the latest Indians’ farm product.

Naquin burst onto he scene as a rookie in 2016 and was filling up the box score, slashing .296/.372/.514 with 14 dongs and 6 steals in 113 games. It was a pretty impressive performance from a relative unknown on prospect lists. So good, in fact, he nearly won the Rookie of the Year, but ultimately lost out to Micheal Fulmer’s impressive year. Since then, however, Naquin fell into relative obscurity, spending most of the next two season in Triple-A. The biggest blemish on his rookie outing was the absurdly high strikeout rate of 30.4% which ranked in the bottom 4% of all qualifying batters. Over the 80 games he put together the next two seasons, he made significant strides on his strikeouts, K’ing at 22.5% and 23.0% respectively. Now entering 2019 as a regular in the Indians outfield, Naquin seemed primed to reach the potential he so displayed once upon a season.

Get it? Because he’s putting us to sleep? Anyway, looking at Naquin’s start to this season, there are a couple of things in his numbers that do show some progress. One is his launch angle, which he has nearly tripled from the previous season. The past two season, Naquin was launching balls at about a 5-degree angle but so far this year, he’s launching them at a 14.7-degree angle. This is leading his X-Stats to look rather favorable. His xBA is .275, 40 points better than his actual at the moment and X-SLG is .466, 120 points higher than his current mark. His hard-hit rate is at the 40% mark which is 7% above the Major League average. There are also, however, some major red flags: his strikeout rate is actually worse than it was in his rookie of the year losing campaign (31.6%) and his walk rate has been consistently going down year over year (currently at an all-time low of 3.5%). Doesn’t really matter how hard he’s hitting it if he can’t actually make contact.

Not great if I’m being honest. Outside of the fact that he has established playing time that’s all he has going for him right now. He can’t help but strike out and until he makes major strides in that department he’s not worth really anything outside of the deepest of leagues for the everyday at-bats.

One of the biggest surprises this past offseason was our website’s decision to rank Yu-Cheng Chang 40th overall in the shortstop rankings. Then, he was further disrespected by writer E.J. Fagan when he wrote, “nothing to see here”. Well, E.J. he’s 6’ 1,” easy with your micro-aggressions, bro.  Seriously though, I’m not sure if the fade is largely to do with arguably the best shortstop in the game blocking him from being promoted or on sheer talent. So I decided to dig in and see what the Tawainese product had to offer fantasy players.

Chang has ascended at a reasonable clip over the past four years or so. His value, from an organizational perspective, has been steady too. Continuously being seen as a top 5-10 prospect within a Cleveland organization that is not too far removed from its days as a highly-touted system should do something to bolster his value. Oddly though, it has been anything but that for the 23-year-old.

Superficially, I understand why too.  During his first taste in the International League, Chang’s performance was…whelming. A .256/.330/.411 slash line with 13 home runs isn’t exactly what you want to see out of a reported “bat first” prospect. Making matters worse was a decline in BB% and an increase in K%. Reading some scouting reports pointed to a peculiarity in topspin on balls off the bat that negated his power potential.  This was underscored by a <20% infield fly ball rate, which put him within the top 20 worst International League offenders. The 109 wRC+ points to a barely above average producer as well. Again, I am simply whelmed.

Yu Don’t Got What I Need…

Fangraphs and Baseball Prospectus list Chang’s weight somewhere around 175 – 180, but when I laid eyes on him two weeks ago in Durham his frame seemed more filled out. Still, I could see where these sites identified the 55 game power. Outside of Bobby Bradley (who is a monster) and Jason Kipnis, Chang’s batting practice left me the most impressed. He had the same repeatable motion and weight transition while delivering line shots that – if you squint – could be seen as singles/doubles as opposed to home runs.

This has played out largely over a small sample size this year. According to the Statcast data, Chang’s average launch angle has been about 12.8 degrees. The problem – which again is likely attributed to the oddity of having a heavy top spin – is his exit velocity being 89 MPH and he needs it to sit more along the lines of 96 MPH.

But Yu Chang Is Just a Friend…

Here’s some #analysis. It’s there, but can he tap into it? We’ve seen this happen a thousand times over and especially in the Cleveland organization. A player with the raw power and seemingly some hit tool gets into the majors, gets a coach to tweak a swing plane coupled with a more lively ball, and voila you have a viable player.

A lot of writers and a few scouts will say Chang is an MI utility option. Jason Kipnis is likely to be gone next year given his being bad and a hefty contract. There is a very real chance that Ramirez slots over to second and Chang gets reps in a quasi-rebuilding franchise as an everyday 3B in a still-good lineup. This is a team that trotted Lonnie Chisenhall out there for what seemed to be a decade before cutting bait and the ceiling is much higher for Chang.

In the end, he’s a 3rd prospect in a deal where you’re looking to acquire prospects. A higher floor, lower ceiling lottery ticket with room to be a glue guy on your competing roster. You could do worse. Like, say, Lonnie Chisenhall. 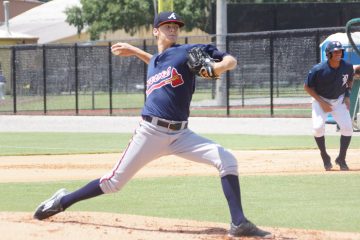 Dynasty's Child Episode 74: Patrick's On The Edge Of 17