The Triple Play is back for a third season! This regular feature is broken down by staff writers Bob Osgood and Paul Monte and a rotating panel of third writers. If you’re new to the Triple Play, this series breaks down an arm, a bat, and a prospect within each organization for your reading pleasure! Follow Bob (@BobOsgood15), Paul (@3cardmonte13) and Greg Gibbons (midsports10) on twitter and read their analysis here at the site!

Nate Pearson needs no introduction, so I’m just going to jump right into my thoughts on him. Over the past year I’ve gone from coveting Pearson in my fantasy leagues to being happy that I’ve yet to add him to one of my rosters. The 6’6’’ righty has ungodly stuff, notably a fastball that has been clocked at 104 mph and a wipeout slider with elite upside. His physical frame and arsenal are everything you could want in a starting pitcher and when he pitches, you want him on your team. Unfortunately, Pearson is still relatively raw, having only once logged 100 innings pitched due to a long injury history dating back to high school. He made his MLB debut this season, logging a 6.00 ERA over 18 innings with 16 strikeouts, 13 walks, and allowing five home runs. Not exactly a stellar season, and to make matters worse, he spent a portion of the season as a spectator, missing a month with a flexor strain in his right elbow. Seemingly healthy at the time of this writing, the Blue Jays have committed to using Pearson in the bullpen for their playoff run, and frankly, if it were up to me I’d just keep him there.

Pearson reminds me a lot of Noah Syndergaard, both physically and in skillset. Both are former top prospects, and in the year of their MLB debuts, Noah (2015) clocked in at #9 overall on Baseball Prospectus’ Top-101 and Nate (2020) at #19. They’re both known for their exploding fastballs, jaw-dropping breaking pitches, injury history, and oh, both started their careers in Toronto. In 2014, while Noah was still a prospect (now with the Mets), he had a tumultuous season by top-prospect standards- a 4.60 ERA over 133 innings, 11 home runs allowed, and he hit the injured list with a flexor strain in his right elbow. Sound familiar? “Although the Mets described the strain as mild, the injury has been known to lead to Tommy John surgery.” Sure enough, March 27, 2020 Noah Syndergaard underwent Tommy John surgery and will not be full strength again until Spring Training 2021 at the soonest. Not to be overlooked, Syndergaard did have a number of successful healthy seasons as a starting pitcher, including an impressive 2016 season with a 2.60 ERA over 183.2 innings pitched with 218 strikeouts in-route to an All-Star nod and even NL Cy Young votes. Syndergaard’s ups and downs are about the range of outcomes I can reasonably foresee for Pearson in the next couple of seasons, and while I never wish injury on anyone, by all accounts, Syndergaard has been somewhat of a crystal ball view of what’s coming next for Pearson.

To be blunt, I’m not actively seeking Nate Pearson in any league right now unless I’m at the very beginning of a rebuild. While there is inherent injury risk with just about any Major League pitcher, with Pearson’s prospect pedigree a trade partner is likely to ask more in return for him when compared to a “safer” pitcher with less upside, and you’re taking on an abundant amount of risk for a small chance he hits his upside. Surely, my league mates will point to this article when Pearson is a breakout candidate next season following a hot run throughout the playoffs, but that isn’t going to change my long-term outlook here. Pearson has all of the upside to be 2016 Syndergaard, but all of the risk to be 2020 Syndergaard.

Few feelings are better in fantasy baseball than targeting a guy for a breakout and watching it happen while he is on your roster. Now, what about the guy who you took late in the draft? You didn’t want him, but he was the best that was available. You took the guy, shrugged your shoulders, and got ready for the next pick. Fast-forward to the end of the season and your apathetic pick is leading your team to the championship. Do you take a victory lap about your star sleeper and the great pick you made, or do you humbly accept that you got lucky? It doesn’t matter because you are winning the championship!

I hate when authors make me play the guessing game, I won’t make you do that but look at these numbers.

Are you sold? Who is this superstar, in case you didn’t see the title of my section? Teoscar Hernandez. NFBC ADP of 309, the 93rd outfielder off the board. There was upside in the pick as he hit 26 home runs and stole 6 bases in 2019. The problem was the strikeouts. 153 of them in 417 at-bats. Good (bad) enough for a 33 K%. It is difficult to have a decent batting average when you strike out 33% of the time. He hit .230 for the year.

Signed as an 18-year-old out of the Dominican Republic by the Houston Astros, Hernandez put up gaudy numbers wherever he played. In 2014 in High-A and Double-A he combined to hit 21 home runs and steal 33 bases. The giant red flag was still there then as he struck out 153 times. He has improved as he repeated levels in the minors, but we have not seen that repeat in the majors at this time.

2020 is going to be difficult to use in projections for 2021. We must decide how much of this will stick for him in 2021 and beyond as dynasty owners. The numbers are so good in 2020 that he will not fly under the radar next season. We can expect to draft him highly in startup drafts and the trade market will be tight unless you play in a head-to-head league that penalizes strikeouts. There is more risk in Hernandez than most players. At 27, he is not old, but the prospect shine has been gone for a half a decade. I get visions of Joey Gallo when I look at his numbers. Gallo figured it out last year, hitting .253 in 70 games. He’s hitting .171 in 2020. My worry with Hernandez is that while his numbers are great for fantasy a return to a 33% strikeout rate paired with his subpar defense could equal a loss in playing time. Luckily, he hits righties as well as he does lefties, so platooning is not a huge worry. It’s tough to pass on a guy with Statcast numbers like Hernandez and I’m excited to track him in 2021.

“This is the ideal male body. You may not like it, but this is what peak performance looks like.” Recently, there have been a few popular ballplayers who really bring this meme to life: Bartolo Colon and Willians Astudillo — affectionately known as Big Sexy and La Tortuga, respectively. The implied joke the meme makes is that these two take the physical form closer to a sumo wrestler than a greek sculpture, yet they have found success at the pinnacle of their athletic field. Truly, you should not judge a book by its cover or an athlete solely by their body fat percentage.

The 21-year old catcher, listed at 5’8” and 265lbs, shares a very similar build to the fan favorites discussed above. By appearance, Kirk certainly does not strike you as a top prospect. He doesn’t have the coveted high waist or broad shoulders. He doesn’t glide across the outfield or dazzle with cat-like reflexes at shortstop. Yet, here he is, raking in his major league debut. In 25 plate appearances, Kirk has announced his presence with a .375/.400/.583 slash line that includes a home run, 4 strikeouts and a walk. Yes, Captain Obvious, the sample is quite small, but Kirk has hit well nonetheless and it should not be discarded. Any time a catcher shows glimpses of hitting ability like that, your ears should perk up.

Perhaps the most impressive part of Alejandro Kirk’s debut is that he had never seen a pitch above High-A before. In fact, Kirk amassed just 619 professional plate appearances before being thrust into the major leagues, despite playing the game’s toughest, most grueling position. That’s special. To go from being a 2016 J2 signee to regular at-bats for the Toronto Blue Jays just a smidge over 4 years later tells you how much confidence the Jays have in Kirk’s abilities. That confidence doesn’t come without good reason though. Kirk has simply hit the cover off the ball at every stop along his brief pro path with a wRC+ above 150 in Rookie ball, Single-A, and High-A. And did I mention his walk rate has outpaced his strikeout rate at each of those levels, too? There’s no question that Alejandro Kirk knows how to get the barrel on the ball and how to do damage with it.

After spending this entire write up singing the praises of Kirk and running off at the mouth at how special his bat must be, you would assume that Kirk has become my new favorite dynasty player, right? Well, about that. While I do believe that Kirk has some exceptional baseball athleticism (read: bat to ball skills), his frame and lack of general athleticism give me pause. Time comes for us all, there’s nothing we can do to escape that, and because of that, I’m afraid of how quickly Kirk’s skillset might age.

Catching is a grueling, taxing position that beats up the human body and only works to age players even faster — there’s a reason teams try to get offensive stalwarts like Buster Posey and Joe Mauer more time at 1st base as they age: to ease the stress on their bodies and extend their careers. For Kirk’s body to be so far from peak athletic condition so early in his career, I have major concerns as to how it will hold up under the stress of Major League Baseball. For that reason, I am not trying to retain the services of one Mr. Alejandro Kirk in my dynasty leagues. It is entirely possible that he will defy the odds and go on to have a long, illustrious career as a hitter, but that’s not a bet I’m comfortable making at this time. 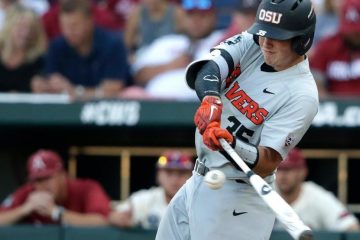