The Triple Play is back for a third season! This regular feature is broken down by staff writers Bob Osgood and Paul Monte and a rotating panel of third writers. If you’re new to the Triple Play, this series breaks down an arm, a bat, and a prospect within each organization for your reading pleasure! Follow Bob (@BobOsgood15), Paul (@3cardmonte13) and Greg Gibbons (midsports10) on twitter and read their analysis here at the site!

The Ace of a Rebuild

At the 80% mark of the Triple Play series, I have been tasked with my most difficult endeavor yet: A San Francisco Giants pitcher. I submitted a draft a few days ago that I felt was some of my best work at The Dynasty Guru. It read, “Sell Everybody.” Unfortunately, I was told that more than two words are required for our Triple Plays, so here we are.

The longer answer is that there is an old friend who has not yet heard the final bell and just might be able to grind away for a few more years, as veteran pitchers so often do. Having debuted in 2008, and still only 34-years-old with fresh elbow ligaments in place, I wanted to take another look at Johnny Cueto.

After a career full of 200+ IP seasons, including 243 2/3 innings in 2014 (which no pitcher has gotten within 11 innings of since), Cueto has only thrown 216 combined innings in 2017-2019, as a result of Tommy John Surgery in 2018. Due to the shortened season, Cueto will likely only throw 70 innings this year. There are plenty of quality, post-Tommy John innings remaining in that arm. The Cy Young runner-up with the Reds in 2014, who briefly appeared as a “rental” with the World Series Champion Royals in 2015, Cueto signed a six-year, $130 million dollar contract with San Francisco entering the 2016 season. He has not had a Hall of Fame career, but with a 127-87 record to go with a 3.36 career ERA and 1.19 WHIP, along with a hundred-plus wind-ups over the years, Cueto has been a joy to watch and I’m willing to bet he has a few years left. Owed $21 million in 2021, it is likely that the Giants will exercise their $5M buy-out entering the 2022 season rather than paying another 21-mill.

Cueto worked hard to get back on to the field in September of 2019 to make four starts, only 13 months removed from Tommy John surgery the previous August. Approaching the half-way point of this 60-game season, Cueto’s 4.35 ERA (4.01 FIP) is not eye-opening but there is plenty of cause for optimism, starting with his 1.13 WHIP. From a Statcast perspective: a 29.9% Hard Hit Rate allowed ranks in the 76th percentile, 4.6% Barrel Rate is 71st %, .369 Expected Slugging is 67th %, and .223 Expected BA allowed is 65th %. All of this contributes to an Expected ERA of only 3.52. As someone who averaged 93 MPH throughout most of his prime, Cueto’s 91.3 MPH average fastball in limited starts both last year and this year is not too far off from where he sat in years past. Unfortunately, Cueto has a -3.1 Pitch Value on his fastball from Fangraphs, and his Walk Rate is 3.5 BB/9 compared to 2.6 BB/9 in his career. So, where has this above-average season come from thus far? … How does a .050 BA sound against Cueto’s change-up?

Cueto has thrown the change-up a career-high 27% of the time this year, only the second season that he has thrown the pitch more than 20% of the time (2018). With two strikes specifically, he’s upped the usage to 34%, used equally against both LH and RH hitters. And, amazingly, with a 6.5 Pitch Value, Cueto has had the #1 change-up in ALL of baseball in 2020, surrounded by some of the elite off-speed pitchers in the game. 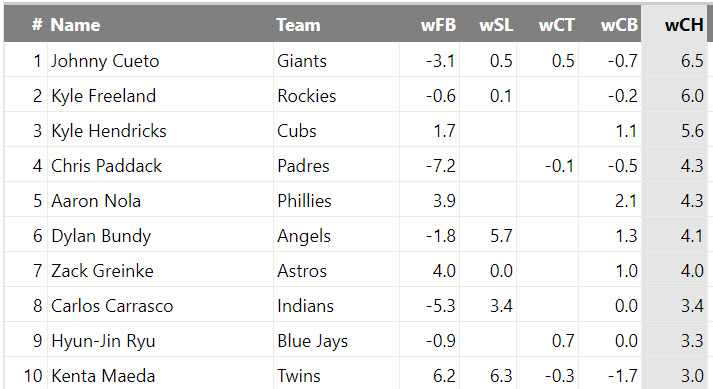 Cueto has faced teams with winning records in 5 of his 6 starts this season, including the Dodgers twice, the A’s, and a trip to Coors Field, and has yet to lose a game with a record of 2-0. He even brought a no-hitter into the sixth inning in LA, only to witness the horror of Hunter Pence being unable to find a routine fly ball. If the Giants were willing to eat some of his salary, it wouldn’t surprise me if Cueto was a trade candidate around the deadline for a playoff team needing a reliable arm amidst all of the injuries in this short season. While the NL West won’t get any easier (especially, since he can’t face his own Giants lineup), I believe that Cueto will be a contributor in the ratio categories and with a 7.8 K/9 that actually surpasses his 7.5 career rate, I think it is more than useful to roster Cueto in 12-team leagues or deeper as he enters the “crafty vet” stage of his career. But please, sell every other pitcher.

One of the most exciting aspects of playing dynasty baseball is the waiver wire. Whether it is first come first served, rolling waivers, or FAAB, the dynasty owners who are the most active usually are at the top of the standings. Normally I like to stay as patient as possible for the first two to three weeks, not making any quick moves unless a major injury has opened playing time for someone I like on the wire. 2020 has been different because the season is so short, the churn at the bottom of the roster has been much quicker. Add in the ever-growing IL/COVID list and you need to jump right in and make moves.

Every year players seem to come out of nowhere and provide excellent production for large chunks of the season. Most of the time there is no real reason that the player has suddenly become valuable, but you just ride the hot hand. This year that guy was Giants infielder Donovan Solano. Signed by the Cardinals 15 years ago, the now 32-year-old has over 4,100 minor league at-bats and just 1,300 in the big leagues. His story is one of perseverance. There was an excellent article by Andrew Baggarly in The Athletic last week that detailed his background; it’s worth the read. He was also covered by Ben Sanders in this week’s TDG Round Table.

I agree with Ben’s long-term assessment. 32-year-old pop-up stars are generally not long-lived. I do think he will continue to provide production in the short term, especially in 2020. Power will not be a feature in his game–he’s below 45th percentile in both exit velocity and Hard Hit %–but his contact rate, low K%, and xBA are all very rated highly. He has a prime spot in the batting order, hitting second or third in the lineup on most days and hits better against right-handed pitching. The Giants are above league average in most hitting categories so Runs and RBI can also be expected along with his excellent batting average.

Knowing that he will play every day is very important in this season where players are missing games at a higher rate than I can ever remember. In shallow leagues, there are likely better options, but he is a decent bench option to start as needed. In deep leagues, he is starter material and a nice anchor for the batting average category, which is always tough to manage. He is not much of a walker, so his OBP numbers will not be as high as expected with an average that may end up in the high .300’s before the season has ended. Is he a long-term keeper? No. Teams win championships with players that are putting up stats now, not with guys that may put up stats in two years. If you are rebuilding, explore your options. If you are in the hunt in a season where everything seems to be turned upside down, enjoy his steady contributions.

Joining a number of high-profile catchers selected in the first round of recent MLB drafts, the San Francisco Giants added Patrick Bailey as the 13th overall pick this past June. The North Carolina State product was ranked #17 by MLB Pipeline heading into the draft and brings all the accolades you could imagine from his time with the Wolfpack, including the 2020 Johnny Bench award for the nation’s best catcher. The 6’2’’ switch hitter signed with the Giants for $3.8 million following his pandemic shortened 2020 season, where he hit .296 over 17 games with six home runs, 20 RBI, .466 OBP and a near 1:1 strikeout to walk ratio. More importantly for the Giants, Bailey brings advanced skills behind the plate and is already renowned for his arm strength and receiving ability. The Giants are creating one of the top catching pipelines in the minors having selected the recently promoted Joey Bart second overall in the 2018 MLB draft, and while Bart has the superior bat, Bailey is expected to be more advanced defensively. MLB teams generally draft the best talent available rather than need, but overall this is an interesting selection by the Giants considering they seemed to have their catcher of the future already. While his defense will be his carrying tool and ultimately get him to the highest level, from a fantasy perspective we are mostly interested in his offensive outlook.

Baileys on the rocks

Scouting reports on Bailey generally come back very similar- defensive-first catcher with an average hit tool who can bring some pop but has some swing-and-miss in his game. MLB Pipeline graded Bailey a 50 overall (20-80 scale), with his stand-out offensive tool being his power from both sides of plate as evidenced by his homering lefty and righty in the same game during college, twice. Bailey has a keen eye at the dish as well, increasing his walk rate every year in support of his superb on-base-percentage, while the primary concerns with his offensive game are his average hit tool and an annually increasing strikeout rate. Below are his college stats to peruse, but let’s make one thing clear, this guy can play.

You may not have seen Bailey play yet so take a look at his scouting report video below which is a great place to get started.

Unfortunately for us, we probably won’t get to see Patrick Bailey make his professional debut this year due to the pandemic, though he is on the Giants 60-man player pool. Assuming he is eligible for your league’s 2021 first-year player draft, you’ll start to see him included in prospect rankings this year and into the off-season. I expect Bailey to be higher on “real-life” prospect rankings lists than on “fantasy” lists due to his advanced defensive skills. Additionally, there is usually a longer lead-time with catchers as they progress through the levels at a slower pace, and while Joey Bart streamlined this process, it was primarily due to his offensive upside. Bailey’s ETA is currently 2023, but I think it could stretch even further before he is making an everyday impact at the major league level. He has a relatively high floor as a quality backup, but for fantasy purposes we’ll be looking for more. Personally, I prefer not to roster catchers who have not yet advanced to the upper minors, so I won’t be using an early draft pick on Bailey, but in deep league’s he’s worth a late-round flier so long as you have the patience. 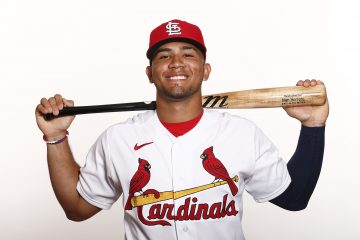