The Triple Play is back for a third season! This regular feature is broken down by staff writers Bob Osgood and Paul Monte and a rotating panel of third writers. If you’re new to the Triple Play, this series breaks down an arm, a bat, and a prospect within each organization for your reading pleasure! Follow Bob (@BobOsgood15), Paul (@3cardmonte13) and Trevor Foster (@TrevFost) on twitter and read their analysis here at the site!

Originally committed to pitch at the University of Washington, Snell opted to forgo college after being drafted by the Rays 52nd overall in the supplemental first round of the 2011 MLB draft.

(Fun Fact: The Rays had a whopping 10 of the first 60 picks in the 2011 MLB draft due to the compensatory rules that were in place at the time before the 2013 CBA.)

As an 18-year-old arm out of high school, it was never going to be a quick road to the majors for Snell but after largely dominating the minors across six seasons, Snell made his Major League debut in 2016. Just two years later Snell put together a spectacular season of a 1.89 ERA and 221 strikeouts across 180.2 innings en route to his first career CY Young award. That performance vaulted Snell into the top 5 of most dynasty starting pitcher rankings after the 2018 season. Despite an injury-plagued 2019 season and an up and down start to the abbreviated 2020 season, Snell is still thought of as an elite dynasty starting pitcher, but should he be?

When it comes to Snell, there is no denying that the stuff is filthy. Since coming into the majors in 2016, he is among the league leaders for starting pitchers in K/9 and Swinging Strike percentage. However, in that same timeframe, he is also towards the bottom of the league in BB/9 and Ball percentage. Throwing more balls leads to more walks which leads to higher pitch counts which leads to shorter outings. This has largely been true for Snell over his career with the Rays as he has never averaged over 6 innings pitched per outing in a season (not even in his CY Young 2018 season) and has often racked up large pitch counts early in games. That is not the workload you would expect from an elite starting pitcher and certainly not the workload you would want from your fantasy ace.

Now, some of the blame for his shorter outings can also be attributed to the Rays. As an extremely progressive organization, they have shown that they are not afraid to let their elite bullpen go to work early in games instead of letting their starters grind through an extra inning or two. While this is not Snell’s fault, it has been a winning recipe for the Rays and one they probably will not deviate from anytime soon.

Do not get me wrong here, Blake Snell is a very good pitcher and will rack up plenty of strikeouts with a good ERA when he is on the mound. However, his inability to consistently work deep into games gives him very little wiggle room to be an elite, top-line, fantasy starter, thus making him merely a very good one. His upside and age still make him a valuable dynasty starting pitcher but one I would be much more comfortable with as a high end SP2 in 12 team leagues (or less) or a low end SP1 in 14 team leagues (or greater), and not the top 6-8 dynasty pitcher he is currently being touted as.

Stumbling to the (waiver) wire

Some of you have skipped out on 2020 fantasy baseball and have decided to wait until 2021. Others have played on a limited basis but still tried to keep up with the season. Many have just finished their fantasy football drafts and have changed gears. This is a great time for the owner who is paying attention to help solidify their rosters as they head into 2021. Trade deadlines have passed in most leagues, so now the only avenue to acquire new players will be through the waiver wire. Some guys have quietly put together very good seasons but have not received the same amount of attention that others have. I like to look for post-hype guys who have finally turned the corner and have begun to show signs of being the player they were expected to be as prospects.

Bringing back the hype

Tampa Bay had two players that immediately jumped out to me. Brandon Lowe and Willy Adames. Lowe has had stretches of the 2020 season that were MVP worthy and the recognition has been deserved. Adames on the other hand has quietly put up a .311/.387/.566 triple slash line. In his third season with the Rays, the 25-year-old shortstop has shown signs of a breakout season. Part of the 2012 July 2nd international signing class, Adames was traded from the Tigers to the Rays in the David Price deal. He quickly became the top prospect in the Rays system for several seasons and broke into the top 20 of many prospect lists. He debuted in May of 2018 as a 22-year-old and homered off of Chris Sale in his first game. He finished his rookie season with a .278 averaged and added 10 home runs and 6 stolen bases in just 85 games. 2019 he took over as the full-time shortstop for the Rays and improved in the homerun department by hitting 20 but the stolen bases dropped to 4 and the average tumbled to .254.

The shortstop position is loaded with elite talent, comparing Adames to those players will not net very good results. That does not mean that he cannot be a useful addition to your roster. The 23rd ranked dynasty shortstop at TDG in 2020, 29th shortstop off the board in NFBC drafts, he is currently the 17th ranked shortstop in ESPN’s player rater. The issue has been the steals. He only has one and if he could add a few more to the tally, he could quickly move up the rankings. As it stands now he is currently more valuable than a players list that includes Jorge Polanco, Carlos Correa, Marcus Semien, and Aldaberto Mondesi.

Post-hype players have always felt safer to me than a guy who comes out of nowhere and starts putting up valuable numbers. Post-hype means that he has done it before and shown the skills. I can buy into that. Adames may never break into the top 10 shortstop list this decade, but I think he will hover in the teens and can be a started for your team in deep leagues or as a strong middle infielder in 12 teamers. If he goes at the same spot in 2021 drafts as he did in 2020, he will be a good value.

Randy Arozarena came over to Tampa Bay from St. Louis in this past offseason and, as a general rule, Rays targets raise a Dwayne Johnson-esque eyebrow for me. At 25 years old, the book on Arozarena included great contact skills, a good eye at the plate, speed, defense, and the always appreciated “high-effort player” from Fangraphs’ Eric Longenhagen, who slapped a 50-grade Future Value on Arozarena this past offseason. Per Longenhagen, “His quality of contact is very good, he’s a plus corner outfielder who can pass in center field, and he’s a great baserunner, as well as an intense, high-effort player who pro scouts love watching.”

Acquired in the 2016 J2 draft from Cuba, Arozarena had a solid initial campaign in 2017 combining for 11 HR and 16 SB while hitting for a 134 and 115 wRC+, respectively, between High-A and Double-A. In 2018, the 23-year-old Arozarena quickly showed he was ready for a new challenge by hitting .396 with 7 HR and 9 SBs in only 24 games at Double-A but was overmatched at Triple-A Memphis. His .232/.328/.348 slash line in the hitter-friendly PCL meant that he’d be repeating this challenge the following year. In 2019, Arozarena made a huge leap, making quick work of Double-A again, but following that up with a huge season in Triple-A. This time around in only 64 PCL games, Arozarena filled up the stat sheet across the board, by hitting 12 home runs, stealing nine bases, and scoring 51 runs, along with a .358 BA, 1.029 OPS, and a 151 wRC+. Along with this, he had a significant jump in Fly Ball Distance for the entire season (per Prospects Live Minor Graphs).

Arozarena was called up from the alternate site on August 30th of this year to the big league club in Tampa. And as Stevie Janowski from Eastbound and Down showed us, there’s no more exciting place to get sent to than “Tampaaaaaa”. 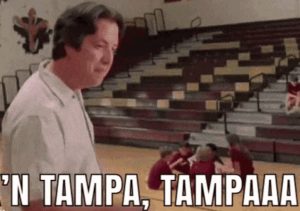 After his recall, Arozarena hit four home runs in his first 15 at-bats, all of which were on fastballs. It is too early to draw any conclusions from batted ball data over 53 plate appearances, split equally over the last two August and Septembers, many of which were part of pinch-run and pinch-hit appearances. However, the .304/.396/.652 career slash line shows that he has not been overwhelmed and entered the weekend with a 10.2%/18.4% BB/K-rate, prior to a three-strikeout game over the weekend. Additionally, the 90.5 MPH exit velocity would rank in the top-quarter of qualified hitters during either the 2019 or 2020 season.

Arozarena’s ceiling could be limited on the Rays, due to the way that they platoon their players across the lineup. Nearly no lineup spot or position is safe, made clear by their unprecedented nine-man left-handed lineup last week. However, their approach puts their players in the most successful situations possible, protecting players’ batting averages, where if he is playing two-thirds of the time then he should be worth rostering in deeper leagues. There is a bit more helium now than there was a month ago in fantasy circles, but an outfielder with speed, decent power, and a K-rate under 20% across the minor leagues, who has the safety net of being an above-average defensive outfielder, and has handled major league pitching on the first go-around is someone I’m very willing to target going forward in dynasty leagues. Throw in the fact that the Rays were willing to trade a solid minor-league arm in Matthew Liberatore in return for him, and I think there will be a lot of at-bats in his future.