The Triple Play is back for a third season! This regular feature is broken down by staff writers Bob Osgood and Paul Monte and a rotating panel of third writers. If you’re new to the Triple Play, this series breaks down an arm, a bat, and a prospect within each organization for your reading pleasure! Follow Bob (@BobOsgood15), Paul (@3cardmonte13) and Joe Drake (@JDrake349) on twitter and read their analysis here at the site!

Is it Fall yet?

As the calendar turns to September we pass the halfway point of the 2020 season. We also only have four weeks left, just when you started to get in the groove and the COVID caused postponements have seemed to settle down, the season is going to come to an end. Soon we will be looking at what went right and what went wrong this season. We’ll try to determine what this small sample size season will mean for us in 2021 when it comes to player values. Who had a breakout season and who struggled? Very strange to think we are just a few weeks away from starting ranking season again.

One guy who has been a permanent pain to try and rank is the onetime sure-thing prospect, Alex Reyes. I am afraid to type the words, but he is finally healthy. Reyes was born and raised in Elizabeth, New Jersey but was not part of the 2012 draft when he graduated high school. At the time he was just 5’11” and was sitting in the high 80’s. Instead, he moved to the Dominican Republic with an aunt and worked to gain the notice of scouts there. He moved in December of 2011 and was not able to be signed in the normal July international free agent period. He waited until December 2012 and signed with the Cardinals. He had grown 5 inches and had his fastball was now in the mid 90’s. He was the number two prospect in all of baseball according to Baseball America in 2016 which is the year he made his debut as a 21-year-old. He posted a 10.17 K/9 and a 1.57 ERA in 46 innings, including 5 starts. He was instrumental for the Cardinals in their playoff run.

Valentine’s Day 2017 was not sweet for Reyes, he was diagnosed with a partial tear of his UCL and had Tommy John surgery two days later. I remember being a buyer then, comfortable with waiting it out since his price was reduced by the news of the injury. He missed all of 2017 before returning in 2018. He had pitched just four innings in 2018 before tearing a tendon in his upper back, and just three more in 2019. I bought and watched his value plummet. I had to cut him in some salary leagues where it just didn’t make sense to hold any longer, especially when 2020 was likely to be used as a build-up year for him. He has appeared in seven games since being recalled on August 15th. He’s stayed on a schedule and has not pitched more the two innings in an appearance. He has held onto the K/9 he displayed as a rookie, striking out 11 batters in 8.1 innings but the control has not been there. He’s walked eight batters and despite injuries Carlos Martinez and Miles Mikolas I still do not expect to see him as a full-time starter in 2020.

The end of the tunnel

So, what do we do with him now? If you bought him anytime after his 2016 debut, you have watched his value slowly sink.  With just a month of baseball left, what do you need to see from him to become a buyer again? For me, I can live with the walks, knowing that he is returning from a very long layoff. I will ignore the K/9 that is sitting at 11.88 because he is doing it in relief. If he stays healthy, can finish out the year without another injury, and maintains the 97 MPH that he is averaging on his 4 seamers, I will once again be a buyer. There is room in the rotation for him in 2021 and I expect him to fill it. Of course, if he does well for the next month that price will be much higher than it is today.

Qualifying at 3B, OF, and Power Forward

There is a man who played more than half the time from 2017-2019 and in that time had a .229/.323/.410 slash line and over those three years combined for only 29 home runs, 94 RBI, 90 runs, and seven steals over 264 games, despite the fact that power and speed had both been positives in his profile at his peak. Even further, I’m recommending acquiring this player in free agency or trade for your single-season and dynasty teams. I’ve, admittedly, lost my damn mind. While he may have been as much of an afterthought as former Chicago Bulls great Brad Miller, who avoided the greatest near-miss punch in NBA history from Shaq, this Brad Miller is being added via free agency in leagues of all shapes and sizes. Known for his 30-homer season in 2016, and a lot of frustration since, it’s time to put the last three years in the rear-view as fantasy owners.

It may not be expected to stay there, but what Miller is doing from a Statcast perspective this year is astounding. Entering play on 9/6, he’s barreled 16.4% of his balls in play (95th percentile) leading to a 49.1% Hard Hit Rate (93rd percentile). His wOBA is .425 (9th in MLB) despite the Expected wOBA being at .457 (4th in MLB). A .243 career hitter, he’s hitting .307 which may seem aided by a .360 BABIP. However, Statcast has Miller at an Expected BA of .323, deeming his season unlucky this far. His 18.1% BB-rate basically doubles his career rate (9.7%) leading to a .436 OBP, which would be 3rd in the NL if he had enough at-bats to qualify, something he is only a few plate appearances short of. And while he’s only stolen one base thus far, Miller still features a 61st percentile sprint speed at the age of 30. It’s tough to steal bases when half of your hits are for extra-bases.

Where is Miller making adjustments? Quite simply, he’s been more patient at the plate and when he does swing, his bat is quick. In general, Miller’s only swinging at 39.2% of all pitches which is way down from a career 47.6 Swing-%. His Zone-Swing% is down to 58.8% (after five straight seasons in the 67-68% range) and when he does swing at pitches in the zone, he’s making contact at an 80.5% clip, his best since the impressive 2016 season.

He’s seeing fewer fastballs than in any season in his career (only 53.6%) and yet he’s crushing this pitch to a tune of a .342 BA, .842 SLG, and an Exit Velo of a career-high 94.5 MPH on fastballs. He’s not missing any mistakes, pulling the ball more than he has the last three years (36.4%) of the time, but also going to Center 50.9% of the time, leaving only 12.7% of his balls to the opposite field (5th-least in all of MLB) It remains to be seen whether the low Oppo-rate is a good thing.

Ride Out The Wave

It will be interesting to see if adjustments are made as Miller continues to pull the ball hard, but we’ve already seen that increased off-speed stuff has not done the trick. Half of his strikeouts are on the outer-third and beyond, with significantly decreased Exit Velocity, so working out there may force Miller to go the other way more. 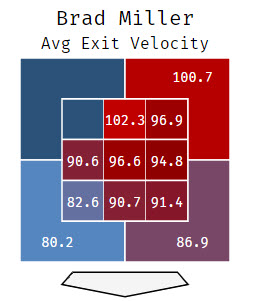 The guy who had 30 HRs, 29 doubles and six triples in 2016 may not be as far away as we imagined. A little more patience hasn’t hurt either. Although he’ll lose Outfield-eligibility next year, the 3B/OF combo is much appreciated for the time being. I’m adding Brad Miller everywhere, including 10 and 12-teamers, as well as dynasty, and riding out this season-long hot streak.

Hello and welcome to the Cardinals prospect segment of the program. Being both a Cards fan and a prospect hound, this is what I’d call my bread and butter. Initially, I wanted to take a deeper dive and introduce a lesser-known baby bird to the Dynasty Guru fam. However, given Mr. Carlson’s not-so-pleasant start to his career, I thought a review of what to expect from him going forward would make sense. Off we go!

Just a city boy born and raised in South… California

Okay, I know, it doesn’t rhyme, but I didn’t want to start our tale off with a lie. Dylan Carlson is a SoCal boy who was selected in the 1st round out of Elk Grove HS just over 4 years ago. His path to the majors has been relatively quick (3.5 MiLB seasons and less than 2000 plate appearances) because of his ability to adjust to each level and quickly find success. He notched a wRC+ of 101 or better at each stop and really turned it on in 2019 with a 142 mark in Double-A and a 161 mark in Triple-A. He was hammering the ball day-in and day-out and in an organization that doesn’t have much offense at the outfield position, his promotion to The Show was imminent.

Jumping back to the present day and Carlson has joined the senior circuit and flopped, more or less. In 76 plate appearances, Carlson owns a .169/.224/.254 slash line and a woeful wRC+ of 31. Large yikes. I’m not going to sugarcoat this and tell you that it’s not as bad as it looks and whatnot. It is very much as bad as it looks. The league has a plan of attack for Dylan Carlson and it is working to a tee. However, just because that’s true right now doesn’t mean it will be true forever.

If you watch Carlson’s at-bats, you don’t get the sense that he’s overmatched. He’s got a better approach than many current veterans and the confidence and poise to take close pitches. His strikeout rate is nearing 30%, but he doesn’t flail at every breaking ball he sees and has a better than average O-Swing % (Carlson: 25.6%, MLB: 30.%). The approach is there, the power is still there, the speed is still there… I think it’s quite possible that we’re just seeing a 21-year old who’s a touch out of sorts while getting his first taste of MLB pitching during what might be the weirdest MLB season of all time. I’m not going to hold this month and a half stretch against him.

Conclusion: Hold on to that Feelin’

Now, my friends, is the time to strike while the iron is… cold? Yup, that’s what we’re going with. Hey, some things sound better in your head before you type them. Some will win, some will lose, yada, yada. Back to the topic at hand. If I were you, I would be doing my best to acquire the services of Dylan Carlson at a discount. I know that most trade deadlines have probably come and gone at this point, but keep this idea in your back pocket for when your new league year starts. Even if Carlson turns it around in September, some will have already soured on his potential after his putrid start. After a taste of the big time and a full offseason to adjust to the league’s book on him (breakers and offspeed), I think we’re going to see a much better 2021 season from St. Louis’ top prospect.