Follow Phil (@barrington_phil), Keaton (@TheSpokenKeats), Aaron (@SABRtoothTigers), and Ben (@HPBenSanders), on Twitter and read their analysis here at the site!

Shane McClanahan has hit the ground running in 2021. He’s been making up for lost time since Tommy John surgery delayed his college career. Bouncing back as a 20-year-old freshman in 2017, he earned All-American Freshman First Team honors. He started his sophomore draft-eligible year by touching 100 MPH in his debut and jumping to the top of draft boards. He blazed through his first full minor league season in 2019 with improved control and dominant strikeout rates, reaching Double-A. He then became one of just four players to ever make their MLB debut in the playoffs in 2020. He is a man on a mission, and has exceeded his benchmarks at every stop along the way.

Shane’s stuff is elite, especially factoring in that it’s coming from the left side. He was originally drafted out of high school by the Mets in 2015 with just a high 80s fastball. Post-TJ surgery, and with a more mature body, he started hitting upper-90s and even triple digits in college. He has developed two nasty breaking pitches with a slider and a curveball. His 2021 pitch arsenal, according to Baseball Savant, is most similar to the Cy Young-caliber repertoires of Robbie Ray and Carlos Rodon. Clearly, there’s room for an even higher level of dominance with his skillset than he has shown during his already impressive rookie campaign.

McClanahan battled command issues in college, especially coming back from a surgery that notoriously saps the pitcher’s control. He has squashed most of those concerns with both his minor league and major league performances. The biggest knock against him so far has been his hard contact allowed. He ranks in the bottom 10% of average exit velocity allowed, max exit velocity allowed, barrel rate and hard hit rate. Not great, Bob. But not all hope is lost! Two of the most similar pitchers to this batted ball profile are Frankie Montas and Shane Bieber. Pretty good company to be keeping. The reasons someone finds success while allowing this type of hard contact is by missing bats and keeping the walks low. McClanahan’s K-BB% of 20% ranks 24th among pitchers with at least 120 innings pitched. If you don’t let hitters get on base the easy way, and you miss bats, then there’s less damage for them to do when they hit the ball hard.

The results this year, and the skillset McClanahan will be bringing into his prime years should have us drooling over his future. But you can’t help but worry about one big factor: he pitches for the Rays. Will they limit his innings? Will they pull him out of games early? Will they convert him to a bullpen/hybrid role? Will they come up with some completely different advanced tactic that we haven’t even thought of yet?

To all of those questions I say: stop your worrying. McClanahan is on his way to 140+ innings pitched in a year where it was speculated that he would need to ramp up his total. He should be set up to throw 165+ in 2022, which would put him among many of the league’s aces. The Rays also tend to avoid putting their pitchers at a disadvantage by facing a lineup a third time during any start. However, Shane has had 16 straight starts where he saw at least one batter a third time. The coaching staff already trusts him, and he is rewarding their trust. He actually improves the third time he faces a lineup. His wOBA allowed the first time through an order is .317; the second time it’s .322; but the third time, it drops down to just .236. In a situation where even the best pitchers struggle, McClanahan is at his best.

I’m going to be walking through the streets, ringing the bell for McClanahan all offseason. He is going to be a top-15 pitcher next year in his age-25 season in 2022, and will be an ace for several years to come. 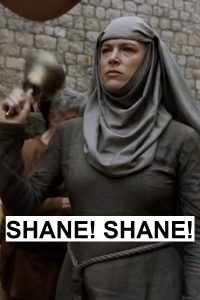 Do you even lift, bro?

Obviously Yandy Diaz lifts weights. Just look at his photo above. With biceps like that, it’s no surprise that he has a maximum exit velocity of 113.5 MPH, good for 90th percentile in the league. What he does not lift is the baseball. His average launch angle in 2020 was -7.9 and his groundball rate was 66 percent. It’s a shame, because he has excellent plate discipline and contact skills. He walked 16.7% of the time last season and struck out only 12.3%. The result was a rather strange .307/.428/.386 slash line.

If Diaz could maintain those walk and strikeout numbers while elevating the ball and tapping into his raw power, he would quickly go from statistical oddity to fantasy monster.

Don’t July to me

Nothing changed through the first two months of 2021. Diaz was slashing .251/.384/.293 at the end of May, with a 58.6% groundball rate and zero homers. He finally hit the ball over the fence a couple times in June, but his strikeout rate surged. Then July happened.

Diaz probably won’t become a star. He’s 30, doesn’t have a great track record, and plays for the platoon-happy Rays. He’s most valuable in OBP or points leagues with daily lineups.

He is making progress, however, and his powerless start has kept those improvements under the radar. Diaz is only 47% rostered on Fantrax, and just 19% on CBS. He has the potential to hit 20-25 home runs with an OBP over .350, which should produce lots of runs and RBI in the Rays’ strong lineup. And though he isn’t young, his plate discipline should help him age well, and just based on photos, I wouldn’t question his commitment to physical fitness. A late-career breakout wouldn’t shock me, and at the very least he’s an undervalued CI option in many leagues.

Ian Seymour might be the perfect example of the difficulties of scouting through COVID. After a breakout summer on the Cape, where Seymour tallied a 2.48 earned run average while striking out 39 over 25.1 innings pitched, he returned to Virginia Tech and kept the improvements going, showing increased velocity and striking out 40 over 20.1 innings in four starts before the season was cut short due to the pandemic. The gains weren’t on display for long. leading many scouts to wonder if they were real or small sample noise. The Tampa Bay Rays chose to believe and drafted the 6-foot lefty in the second round of the 2020 draft, and although his professional debut was delayed to the middle of this summer, it looks like it’s paying off.

After finally making his debut in July of this year, Seymour hit the ground running and showed those flashy numbers weren’t just a small sample mirage. In just 35 innings at Single-A, Seymour posted a 2.55 earned run average with a 15.03 K/9 ratio and earned a promotion to High-A. The magic didn’t stop there either. After two quick starts at High-A, the Triple-A Durham Bulls were in need of a couple of spot starts and Ian Seymour was the guy. In two tests at Triple-A, Seymour turned in two impressive starts, going five innings each, not giving up a run allowing only 4 hits. Seymour has already been sent back down to High-A, so he’s not close to making his Major League debut as of yet, but if this aggressive spot assignment is an indication, It may not be that far off.

Seymour has an incredibly deceptive delivery that allows his pitches to play up naturally, and the added velocity he’s sustained has really allowed his arsenal to flourish. His best pitch is his fastball which he generates awesome movement on but his slider and change-up are not far behind. Both got above-average grades, and his command also graded out as average or better, but based on his professional debut this year I’m leaning heavily towards better than average. The total package is there for a highly effective reliever at worst, and a Marcus Stroman with more strikeouts at best.

The conclusion of Ian Seymour, for me, is I’m high as hell. It’s really the perfect storm of a prospect taking a step forward with his raw talent and landing with an organization that gets the most out of guys like him and pumps out effective major league starters with ease. Although Seymour isn’t a huge guy, his delivery is smooth and eases the tension on his arm and he should be able to hold up to the rigors of a starting role. The time to move on Seymour is now before your league mates read this and vulture him for themselves. Go!