Follow Paul (@3cardmonte13), Phil (@barrington_phil), and Ken (@KenInToronto) on twitter and read their analysis here at the site!

In 2015, Chris Bassitt was a 25-year-old in AA who skipped a level and made six appearances for the Chicago White Sox before the A’s traded for him and said… ‘Kid, we’re going to make you a star!’ Well… it didn’t happen exactly like that, Bassitt was 25 years old when the A’s traded Jeff Samardzija for him (and Marcus Semien amongst others) but it also took him several years for him to become fantasy relevant. It was a rocky start with the A’s. In 2016 Bassitt threw to a 6.11 ERA in five starts! He must be awful right? That’s the only time in parts of seven major league seasons Bassitt has had an ERA over 4.00. If you’re reviewing Bassitt’s year-to-year stats, he’s been consistently good, and we’re now seeing trends of improvement in critical areas.

A darling of my heart, Bassitt throws six… yes, SIX pitches with regularity. His primary pitch is a sinker he throws 37% of the time, generally for strikes. He also has a four-seam, a cutter, a slider, and a change he throws from the same arm slot, generally with above-average horizontal movement, making identifying what pitch is coming tough on hitters. He throws all four of those pitches for strikes with regularity, and he throws them all at least 10% of the time. The curveball he throws 6.2% of the time, in case he needs to show the hitter another look. It frequently peppers the bottom of the zone, and with a healthy whiff rate of 35.7%.

In 2020 Chris had a real ‘breakout’ season, putting up a 2.29 ERA and 55 strikeouts in 63 innings. His ‘expected’ ERA was much higher at 3.79, so the general perception was Bassitt had benefited from some luck, some strong Oakland A’s defense, and some favorable scheduling in a shortened season. Fast forward now nearly 12 months and Bassitt has a higher ERA at 3.19, but also lowered other stats including ‘expected’ batting average, slugging %, and weighted on-base average below 2020’s ‘breakout’ figures. His strikeout totals are better, with 147 in 144 innings, his walk rate has lowered from 6.5% to 5.7%, helping to bring his WHIP down to 1.04. Yes, the six-pitch mix is working and induces an impressive average exit velocity of 87.6 MPH and a hard-hit rate of 33.2%. Yes, those are lots of numbers, but when you add them up, Bassitt may not be truly Grrrrrrreat, but he is pretty darn good, the proof being he pitched in this year’s All-Star game.

Hey Mikey, He Likes It!

Personally, I have Bassitt in several of my fantasy baseball leagues. From time to time, I get trade offers for him, and they’re not even remotely good. I think other owners might have seen a Chris Bassitt start and thought “Hey, there’s something here” and sent a limp offer. They know Bassitt wasn’t a high-profile prospect, they know he doesn’t throw hard. They also don’t seem to see what he’s done year-to-year – his consistently good ERA, low WHIP, improving strikeout rate, and falling walk rate. Having a guy like Bassitt at the back of your fantasy rotation is gold. A guy who gives innings, on a good team, who won’t blow up your ERA or be a sinkhole in strikeouts is incredibly undervalued. Given the heat check I’ve gotten on Bassitt in my leagues, I think I’m about ready to say he’s officially undervalued in fantasy circles.

I can’t get enough Chris Baaassitt…

Let me root, root, root for the home team (and the rest of my fantasy team)

Most of us have a favorite team that we root for. I love baseball in general, but I have been a lifelong Oakland A’s fan, so when this week comes up I always get a little more excited. Fantasy has changed the way that many view baseball – no longer do you just focus on your favorite team in real life, now you have your fantasy teams which can make almost any game worth watching. Having a favorite team also brings in other concerns when managing a fantasy roster, as your personal bias for your hometown players can easily bump them up your rankings. I’m aware of this when drafting and usually end up not owning very many A’s. The one player I did roster in many leagues was Jesus Luzardo, and the A’s remedied that issue for me at the trade deadline.

One player that I have been picking up in trades the last several weeks is catcher Sean Murphy. This isn’t a situation where he has been impressive, it’s been because his value has dropped. I play in one-catcher leagues for the most part, where their value is severely depressed compared to a two-catcher league. Murphy entered the season as a top-10 catcher in dynasty rankings, but to date has hit .219/.306/.414 with 13 home runs and 47 RBI. Those numbers are good enough to make him the 15th ranked catcher according to the ESPN Player Rater. This is a similar pattern that happens to many players in dynasty leagues. Mostly known for his excellent defensive and framing skills, it wasn’t until his third professional season that his minor league numbers started to resemble what he posted in his college days at Wright State. His 3-year collegiate career ended with a .309 career average and he was drafted in the third round. Murphy hit .288 in Double-A and .308 in Triple-A before getting the call to the majors in 2019.

As expected, Major League pitching has been a challenge for Murphy, but at 26 years old and going through the rigors of a 162-game season for the first time in his career, I am willing to give him a pass. The numbers look similar to his 2020 season in which he hit .233/.364/.457 with one glaring difference, the walk rate. The walk rate has dropped from 17.1% to just 8.1%. That has a direct effect on the OBP, which was .058 higher last season. The A’s did trade for Yan Gomes, which will help Murphy get some breathers, as he has appeared in 87 of the 106 games Oakland has played, the third-most in baseball. On the negative side, the addition of Starling Marte at the trade deadline has pushed Murphy down from the five spot to seventh in the lineup. Catchers are always a tough position to get consistent production out of. Murphy is not providing that now, but when you look around the catching landscape it is not like there are many better options.

Oakland does not have a great minor-league system. This does not seem the norm for the Athletics, whose prior teams were built on the strength of their farm system. All of their top prospects are found at Double-A or lower (I am not including oft-injured pitcher AJ Puk in this group), so expecting the Athletics to become a lot better internally is not going to happen for a couple seasons.

However, there is one prospect we may see as soon as this season who is currently hitting at Double-A Midland, and that is Nick Allen. Allen was drafted back in 2017 as the Athletics third-round pick, 81st overall. You may have recently heard his name mentioned as he is a part of the USA Olympic team. Ranked in the top five of Oakland prospects, but nowhere near the top 100 prospects in all of baseball, he is not really on the radar of most dynasty managers that are also not Athletics fans.

Won’t you Come Out to Play?

That is because defense is his calling card, and he was named the top defensive shortstop in all of baseball by MLB.com writer Jim Callis back in January. Going into 2020, Allen was expected to be a Rey Ordonez type, defense-first shortstop and, if lucky, could hit well enough to be Andrelton Simmons. While only 5’8, 166 pounds, the diminutive Allen hit four total home runs in almost one thousand plate appearances from 2017-2019 at Rookie Level to High-A. He did steal 44 bases in that time as well, and maintained a respectable 17% K rate and 7% walk rate. Not exactly eye-popping numbers.

The Sun is Up, the Sky is Blue

The current Athletics shortstop, Elvis Andrus, is batting ninth in the order and was acquired for Khris Davis in a trade before the season of vets who are nearing the end of the line. It is not hard to see the Athletics move on from Andrus and let Allen see what he can do in the nine-hole while playing Gold Glove caliber defense, saving runs and endearing himself to Athletics pitchers and fans alike. In dynasty leagues he is worth a flier for now, but if he ends the 2021 season once he returns from Tokyo as hot as he started it, adding him to your team may very well be the most prudent move. 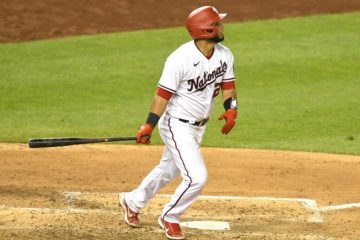