Follow Aaron (@SABRtoothTigers), Phil Barrington (@barrington_phil), and Ben (@HPBenSanders) on Twitter and read their analysis here at the site!

YOU SPIN ME ’ROUND

Dylan Cease’s 2020 was terrible. Sure, the 4.01 ERA wasn’t so bad, but you don’t need an advanced degree in sabermetrics to know it was fraudulent. His FIP was 6.36 and xERA 6.87, his 17.3% strikeout rate was barely higher than his 13.3% walk rate, and he gave up 12 home runs in just 58.1 IP. Dylan will cease to be in the majors if he keeps pitching this way. For a visual representation of the awfulness, just look at his Baseball Savant page: 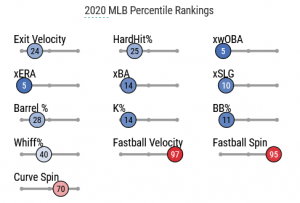 It’s a deep blue sea until you reach the bottom, where you get a bright red reminder of why Cease is still worth talking about after last season. He can throw a baseball very hard with a lot of spin. His fastball sits in the upper 90s, and his slider and curveball both have much more vertical movement than league average. His stuff has been described as “excellent”, “out of this world” and “devastating”. He was ranked No. 163 in TDG’s 2019 top 500, and the upside that got him there still exists.

KATZ IN THE CRADLE

White Sox ace Lucas Giolito, like Cease, was also a top pitching prospect whose MLB career got off to a disastrous start. After posting a 6.13 ERA in 2018, Giolito reached out to his high school coach, Ethan Katz, for help. The results speak for themselves, as Giolito has been one of the best pitchers in baseball the past two seasons. The White Sox hired Katz as their pitching coach this offseason, hoping he can work similar magic with more of their young arms.

Cease had an encouraging spring training with a 1.06 ERA and 22 strikeouts in 17 innings, capped by an 11-strikeout performance against the Rockies in his final start. It’s tempting to believe that Katz has already fixed all his problems just like Giolito, but I’m not quite buying that narrative.

Command is the big thing holding Cease back. His walk rate has never been below 9.7% at any level of the minors. Even during his impressive spring, he walked seven of the 70 batters he faced for a 10% mark. Last season, his 54.9% first-strike percentage was five points below the league average. It won’t matter how hard he throws his fastball if he can’t get it over the plate consistently.

Many fantasy sites are touting Cease as a pickup, although that advice is geared more towards redraft leagues – he should already be rostered in all but the shallowest of dynasty formats. If he is still on your wire for some reason, he’s worth a speculative add. I’m not ready to go all-in though. The struggles last season and the long history of walks are enough to keep me skeptical that he will ever reach his considerable upside.

The Best or Nothing

During TDG’s ranking season, we put Yermín Mercedes as our #6 UTIL-only player, behind even a still-unsigned Yoenis Céspedes. This is our mea culpa. We were wrong. We were so very wrong. To be fair, the brilliant author of that piece acknowledged that he could hit .270 with 25+ home runs with regular playing time, but even that seems light after his start to the 2021 season. The biggest concern was being blocked by several catcher/DH players already on the big league roster. While a serious injury to Eloy Jimenez isn’t how you would’ve liked to see him get a chance, we are all grateful to have been afforded this wonderful experience. As the only player since 1900 to start a season with 8 hits in their first 8 at-bats, Yermín is one of the best stories of the year already.

At 18 years old, Mercedes was signed by the Nationals as an international free agent in 2011. He spent his first 3 years in affiliated ball toiling in the Dominican Summer League, before being released. He latched on with a few different independent leagues, suiting up for such powerhouse teams as the Douglas Diablos and the White Sands Pupfish. The Orioles saw enough to sign him to a minor-league deal, and he meandered through their minor league system providing a decent batting average, inconsistent power, and subpar defense. The White Sox eventually took a flier on him in the minor-league portion of the 2017 Rule 5 draft.

He continued his solid-but-unspectacular performance while spending all of 2018 in High-A as a 25-year-old. In 2019, though, Mercedes hit his stride. He improved upon his already good batting average track record with a .317 mark between Double-A and Triple-A and mashed 23 home runs in 95 games while slugging .581. That performance earned him a spot on the 40-man roster. He got the call up in 2020 and made one pinch-hit appearance (hence being UTIL-only for most leagues).

Running On All Cylinders

On top of a loaded White Sox roster, Mercedes had a bad defensive reputation. If ever a man warranted being described as “barrel-chested,” this is the man. Despite demonstrating a good amount of athleticism beyond what you’d expect with his muscular, stocky build, he has never been very proficient behind the plate. By all accounts out of Spring Training this year, though, he has made massive strides with his defense and game-calling, and the White Sox felt compelled to carry him as a third catcher behind Yasmani Grandal and Zack Collins.

Given the chance to get regular playing time in the early going, Yermín Mercedes has been demolishing baseballs. Starting the year with the hit streak involves some level of luck, but in baseball you make your own luck. He is near the top of the league in exit velocity, barrels, and every x-Stat (BA, SLG, wOBA). If his performance continues, he will not only warrant a spot in the Chicago lineup all year, but he is going to blow by my .270 batting average/25 home run prediction. I hope I’ve undersold him because we could all use a little more Yermín in our lives.

That last name is familiar, isn’t it? The younger brother of the Padres superstar shortstop, signed by the same White Sox team who brought Fernando into the fold back in 2015 (but then later traded him for James Shields and millions upon millions of dollars). The younger Tatis was signed in July 2019 for $500k, and the White Sox sent him to the Dominican Summer League, where he played in 25 games. While not hitting any home runs, Tatis did score 15 runs, knock in ten RBI, and steal five bases with a strikeout rate of 17.8% and walk rate of 14.4%. Both of those rates intrigued me. His slash line was ugly, to the tune of .187/.300/.213, but looking on the bright side, a .300 OBP as a 17-year-old is nothing to sneeze at. Of his 14 hits, three were infield singles, four were to the opposite field, five to center, and three to left field, making for a nice spray chart in his first professional season. A White Sox rep said that “Elijah is more like his father than his brother as a player” and if so, then more power is coming. Fernando Sr. also said that, “while Fernando works harder to get better, Elijah player better at his age than Junior did,” and this was back when he was signed. I can imagine Elijah Tatis would most likely use his brother’s success as a motivating factor, but we will have to wait for an interview with him to confirm.

The right-handed hitting/fielding Tatis played both second base and shortstop, and showcased a good arm but more likely is suited for second base, as seven errors in those 25 games is not good. However White Sox special assistant and director of Latin American Scouting Marco Paddy told reporters back in November that “He’s very polished defensively. He can really play some shortstop right now. He’s not as tall as his brother, but he’s very athletic. And he’s got a chance to be a pretty good player.”

To be completely honest, I have to tell you he is in my minors on every dynasty team I have, so is this piece to increase interest in him? Maybe…(sheepish grin). It is also worth noting that while Luisangel Acuna is also a younger brother, he had a much better first season at Rookie ball, and he went in every first-year player draft I participated in this off-season (ten total, I know, I know, that is too many Dynasty teams) while I took Tatis with the last pick consistently. Not to do too many comparisons to the younger Acuna or other siblings in baseball as there are a lot more Ozzie Canseco’s and Craig Griffey’s than Roberto Alomar’s and Yadier Molina’s, to name some. Taking a chance on a guy who has a major league dad and superstar brother is super easy to do when he is not even being rostered in most leagues. As he will likely not see the Major Leagues for four to five seasons, he is a draft (or add) and stash. Keep an eye on how Tatis performs over the early 2021 minor league season (if/when it starts), as he will be a hot-add for name value alone, with the possibility for much more.