Follow Paul (@3cardmonte13), Patrick (@TheGreenMagnus), and Aaron (@SABRtoothTigers) on Twitter and read their analysis here at the site!

The Chicago Cubs have built a pitching staff most notable for its prevalence of soft-tossing, command-focused hurlers. Kyle Hendricks, Zach Davies, Trevor Williams, Alec Mills. This team certainly has a type. One Cubs pitcher who decidedly breaks that mold is Adbert Alzolay. The hard-throwing righty sits 94-95 with his fastball, but that has been accompanied by a double-digit walk rate at each stop in the last 2 years. His raw stuff has had him in the top 10 of every team prospect list and has earned him the admiration of the front office and coaching staff.

In March, Alzolay was deemed to have a 4th option to be sent down to the minors this year. He had 4 walks and gave up 2 home runs in just over 7 innings during spring training. All signs pointed to Adbert starting the year in the minors. In a surprising move, the Cubs announced him as their 5th starter and he has taken the ball his first 2 turns. He hasn’t come away with a win yet, but has pitched well enough to prove the Cubs brass right so far. He has only issued 3 walks in just over 10 innings, and has yet to yield a home run. If he keeps this up, he should easily hold his spot all year.

It remains to be seen if he will keep it up, though. The lessened walk rate could just be a mirage resulting from both starts coming against a Brewers lineup that projects near the bottom of the league. His pitch placement in his most recent start would generously be described as erratic. Check out his strike zone plot from that outing. 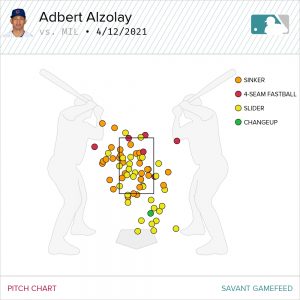 The Cubs are in a position to give him a significant amount of slack to learn on the job this year. Since he is their only starting pitcher who throws above 92 mph, he provides a nice change of pace in an otherwise typecast rotation. Coming up to the majors during the downcycle of the NL Central will give him a soft landing if his control wavers during the long summer.

Still just 26 years old, Adbert Alzolay is entering the typical prime for a pitcher, so there’s room for improvement. It appears that the faith the Cubs have in him is paying off in the real-life game. Let’s hope he can keep this going for his fantasy managers, too.

How Will I Know

Everyone seems to have a different strategy on how they are handling the 2020 season. I have seen some analysts treat it as if it never happened. Others try to consider it but weigh it much less than they would if it were a full season. This will also vary from player to player. Loved Teoscar Hernandez and Corbin Burnes? They are breakouts, going to have huge 2021 seasons. Don’t like JD Martinez? He’s old, done, look at the decline in his numbers! Javier Baez? I told you this was coming, he could never keep up what he had kept up for 4+ years, that .203 average was bound to happen, he’s a bum. I’m guilty of doing the same; it’s impossible to figure out how to look at 2020, and confirmation bias on what amounted to a little over a third of a season is very dangerous. So, what do we do with a player like Baez? We had to make tough choices in the draft season but now that we are a couple of weeks in, we have more info to look at.

Let’s Look at the Video

First, I think the video being taken away caused some serious struggles for players who relied on it. Martinez and Baez were two of the most vocal about not being able to go in and look at the video in between their at-bats. The video was not solely to blame for the struggles they had, but it played a part. This was a tool that they relied on and it was taken away. They had spent hundreds of at-bats and several hours reviewing them to make the necessary adjustments. Coming into 2021 it was announced that the video would return, I saw this as a big plus for them. Martinez is hitting .472/.500/1.083 at the time of this writing, including a 3 homer game on Sunday 4/11/21. Baez has not had the same success as Martinez but he has started better than his 2020 season. .243/.282/.514 is nothing to get excited about, but he does have 3 home runs and 3 stolen bases in just 10 games.

A quick peek at Statcast shows that his exit velocity, while still above average, has not returned to its 2019 level. It’s almost the same as 2020. Something clicked in 2018 and for two years his Statcast screenshot was full of red, but 2020 looked a lot more like 2017. The K% and BB% are always going to be blue, and that’s why he is a much better player in head-to-head or old-school batting average leagues. The sprint speed is also way down from previous years which does not jibe with the 3 stolen bases. One other knock against Baez is that he has slid down the batting order, settling into the 6-spot against right-handed pitchers.

So, what do we do with Baez? I’m probably not the right guy to ask. I have traded him away in two leagues but also drafted him in another. His value is all over the place right now. Some are looking to give up on him while others are completely ignoring 2020 and paying full price. At 28 years old, he should be entering his prime. Ten 2021 games along with 59 in 2020 are not enough for me to sell at a discount price. Shortstop is incredibly deep right now and it will remain that way for the ’20s.  Baez settles in nicely behind the superstars and should continue to provide good counting stats even if we do not see the return to the .280 average he held in 2,164 plate appearances from 2016-2019.

For a large part of my life, I have struggled with imposter syndrome. Whether it be as a fantasy analyst, my real job, or, frankly, anything else, I have always been plagued with a large amount of self-doubt. Meanwhile, my brother was always the opposite. He embraced the mantra, “fake it until you make it.”  My brother did things like drive New York city buses without a license or attempt to rob the mob of their vending machine money in bars, and he encouraged me to live my life in the same way. However, to mislead someone is unfortunately not a part of my skillset. I am who I am. I’m far from perfect, and I don’t know a damn thing.

I do not possess a crystal ball, and neither do any analysts. My Cubs’ prospect this week is a mere 17 years old, and even those who have scouted him live cannot pretend to know his outcome. Below, you can take a peek at some pretty good video. It’s clear, even at such a young age, that Cristian can barrel up the baseball. Beyond that, it just looks like a kid playing baseball to me, even if he’s doing it well.

Scouting Reports and an Absurd Amount of Hype

Alright, if we can all admit we don’t know anything (thanks, Socrates), then why the heck am I writing about Cristian Hernandez? First off, the reports from Baseball America are incredibly encouraging. Similar high praise can be found here from the MLB. When I say high praise, I mean HIGH praise. Take a look at the below Tweet from Baseball America.

The Cubs are targeting one of the top 2020-21 international prospects.

Meet Cristian Hernandez, who could be the next star shortstop prospect from the Dominican Republic ⬇️https://t.co/ccNp1UOekN pic.twitter.com/FnuJkcqyEw

That’s right; people are already comping the 17-year-old to Alex Rodriguez and Manny Machado. The analyst on the MLB Film clip above state:

“He offers more upside than any international prospect in recent memory. Including recently graduated signees Eloy Jiminez and Gleyber Torres…Hernandez has the tools to hit for average and power and could become a .300 hitter with 30 home runs on an annual basis.”

Beyond the over-the-top praise for the Dominican shortstop, there is a rather large signing bonus of $3 million, which had him tied for fourth in his class among international free agents. Compared to the rest of MLD draftees, he’d be 28th, which is first-round pick territory (per Jordan Rosenblum).  Thus, an organization with tremendous success with hitting prospects just invested first-round pick money on Hernandez. That’s a pretty good vote of confidence.

Fake it Until You Make it. Maybe Don’t?

Despite not having any data whatsoever on Hernandez, there is a lot of confidence around the industry in his potential. Hype, potential, and player comps are all things you can use to your advantage when playing dynasty. There’s also the tremendous recent track record of International signees to consider. Again though, we have no idea how this whole thing is going to turn out. We know nothing about his actual skillset beyond the evidence presented above. That evidence, though, can be used in your favor.

Hernandez is a prospect you want on your team right now. The minute this kid starts to show a shred of competence or success in the lower levels, you’re going to see his name everywhere. At that point, it will be nearly impossible to get him on your team without trading away significant players or picks. While he’s currently outside our top 100 Prospects, he won’t be for long. So, while you and I may know nothing, we know a little less nothing than some of the other players in our leagues.

Desk of the Editor - Humankind. Be both.

Digging for Diamonds: Round 2