Corbin Burnes has been on fire this year. His game was ignited last year, but he really set the baseball world ablaze when he started this year with a record-breaking 58 strikeouts before issuing his first walk. That record lasted all of a week before it was broken by Gerrit Cole, but it was a Herculean effort nonetheless. This is a huge shift from his 2018-2019 performances, when he was one of the worst (albeit unluckiest) pitchers in the majors. With any fire that spreads this rapidly, it’s fair to ask if there were any accelerants present.

A Hunk of Burnes-ing Love

He grew out his hair!

Prior to the 2021 season, it was announced that balls would be pulled out of play and checked for foreign substances. There were no repercussions immediately in place, but it marked the most drastic step towards deterring the wide-spread doctoring from pitchers in several generations. There are plenty of examples of pitchers still being obvious about their use of tacky material well into the season. In May, we saw our first instances of enforcement, albeit without penalty. That was presumably enough to scare some players, as spin rates around the league started to dip in late May, even before punishments would start to get handed out in June. 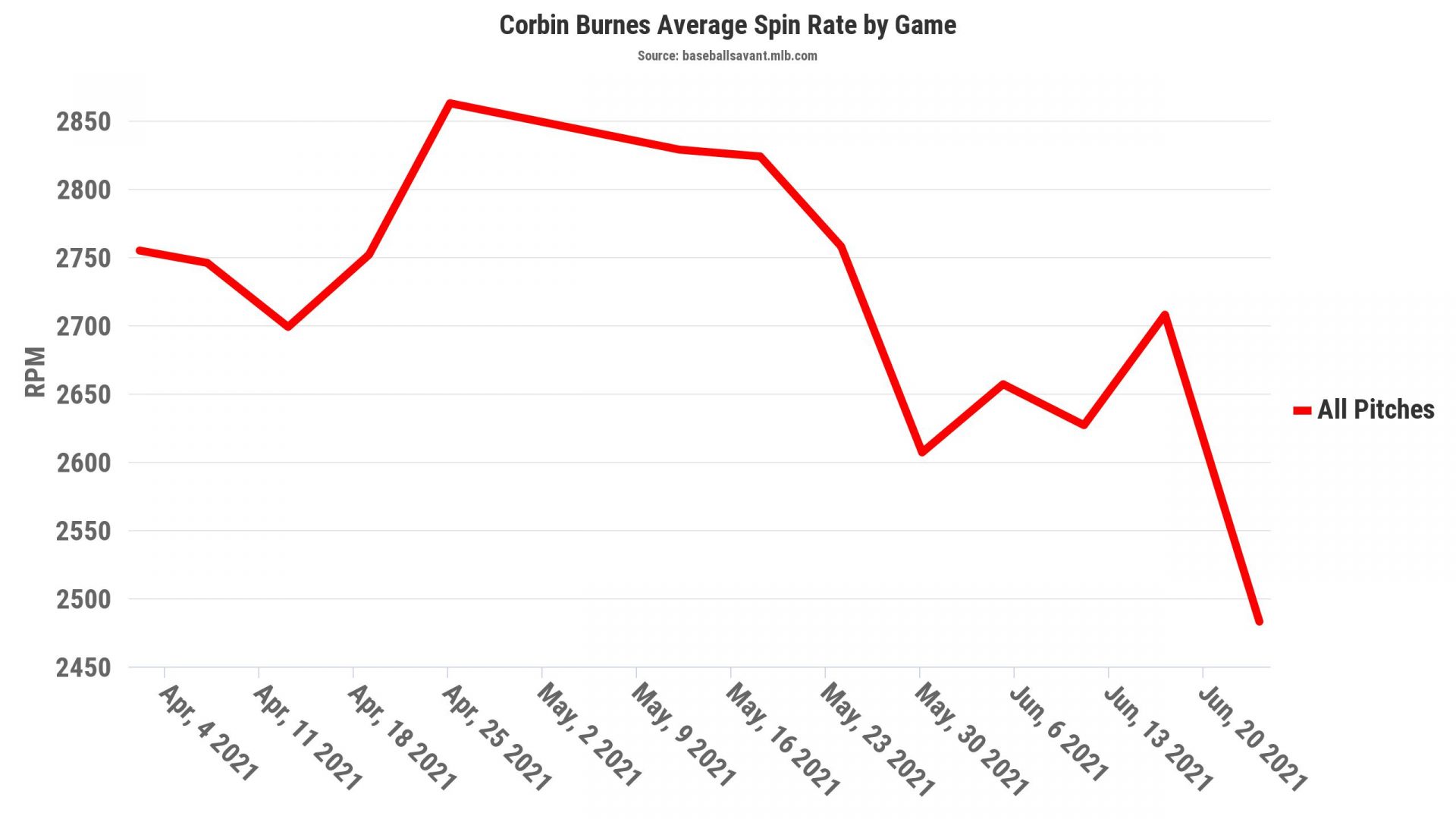 Even in recent weeks, he has shown improvement from his career numbers. The worst of those stats are still indicative of an excellent pitcher, meaning Burnes is inarguably an excellent pitcher. The question remains, though: will he be the top 10 juggernaut he can be when harnessing the power of… his long hair? Or will he be more of a top 30 guy with good strikeout numbers?

It’s Why We Play the Game

One of the obvious differences between redraft and dynasty is the long-term impact that each decision made has on your roster. If a player is struggling at this point of the season in redraft you may not have the time or luxury to wait for him to turn things around. For most players, the solution is clear: cut bait and grab a replacement off the waiver wire. The same cannot be said about dynasty. You can’t, or at least you shouldn’t, just give up on a struggling player. Especially a young one who has either shown the ability to play at the major league level or who has a high prospect pedigree. Players like Jarred Kelenic are easier decisions in dynasty. No one is cutting him after his poor showing, redraft leagues he can safely be cut as you usually cannot afford to stash dead roster spots. Clint Frazier, Hunter Dozier, and Keston Hiura are much tougher decisions.

Tell Me Something Good

Hiura has both the major league performance and the prospect pedigree behind him, but his ineffectiveness over a long period of the last two years has left many team owners wondering if it’s time to sell before his value gets any lower. The former ninth overall pick in the 2017 draft tore up the minor leagues and was in the majors just two years later. As a rookie, he posted a .303/.368/.570 triple slash with 19 home runs and nine stolen bases in just 84 games. Coming into the 2020 season, he could be found in the top 50 of most dynasty rankings, including 33rd overall here at the Dynasty Guru. 2020 was a nightmare year for most and it was especially bad for the 6’0, 202-pound second baseman (soon to be first base only). He hit .212/.297/.410 and struck out 34.6% of the time. He remained in the top 50 entering 2021 despite the poor showing in the pandemic-forced short season.

Redraft ADP showed that most were willing to give Hiura a pass and still took him as the 66th overall player off the board. He has been one of the most disappointing players so far. Through June 6, he had hit .130/.217/.222 and had been demoted to Triple-A twice. After the second demotion, the Brewers said that it would likely be a long stay to allow him to correct the swing and miss issues. Injuries to Travis Shaw and Dan Vogelbach forced him back to the majors after just 11 games in the minors. Whatever issues he is having seeing MLB pitching are not carrying over to Triple-A, where he has posted a ridiculous .403/.506/.722 with five home runs. He is still striking out too much, but the Brewers feel that he is close to correcting some mechanical issues. One other thing to keep in mind is that his mother was diagnosed with cancer during spring training and Hiura has said that that his mother’s health has taken a toll on him mentally. Sometimes we forget that players are human and though they make millions of dollars to play a game, they have the same struggles as everyone else when it comes to the health of their families.

This is a clear situation of buying low for me. When he was first demoted I sent two dozen trade offers and was able to land him in several leagues for players like Ryan Mountcastle and Drew Waters. Could he continue to struggle and bounce back and forth between the majors and the minors? Yes, and if he does that should be a loss on those trades. I will take my chances on the upside and hope that he can turn things around. So far his return to the majors has been encouraging. He has gone 10 for 34 with three home runs, a double, seven runs scored, and 12 runs batted in over the last 10 games. He has also struck out 11 times so the risk is still there. I have yet to see Hiura hit the waiver wire in any dynasty league and if you believe in him the time to buy is now.

A Real Fine Place to Start

Mitchell was the 20th overall pick in the 2020 draft, and is putting up fantastic numbers in his professional debut for the Wisconsin Timber Rattlers in High-A Central. He has a .317/.481/.524 slash line through 108 plate appearances, with 12 stolen bases in 13 attempts. Fangraphs put a 60 grade on his raw power and a 70 on his speed. Those numbers paint a glowing picture of a top prospect and future five-category roto contributor. Look deeper, however, and there are some red flags.

Mitchell has a 24.1% walk rate, 27.8% strikeout rate, and 66.7% groundball rate. That’s an odd combination, and not a great one. Players like Joey Gallo can make a high-walk, high-strikeout approach work by patiently waiting for the perfect pitch to drive over the fence. Patiently waiting for the perfect pitch to pound into the ground is perhaps not the best idea. Mitchell is making it work thanks to the high walk rate and a .469 BABIP, but those won’t be sustainable against MLB competition.

Mitchell could cut the strikeouts and be an ideal leadoff hitter. He could start to elevate the ball to make better use of his raw power and be a three-true-outcomes guy with speed. He could do both and be a star, but he probably needs to change something.

I would be less concerned about how Mitchell was producing his numbers if he was younger. He turns 23 in September, making him slightly older than Dylan Carlson. He will have to move quickly through the minors to stay relevant to dynasty managers, which doesn’t allow much time to refine his contact skills or change his swing.

I think Mitchell is a good prospect, but not an elite one. Others may look at his numbers and pedigree and feel differently, which is why I think he’s a good trade candidate. If you have a contending dynasty team and picked Mitchell with a late first-rounder in your first-year player draft, his fast start might entice a rebuilding team to give you the player that puts you over the top.

TDG Roundtable: Players we were wrong about

SCOUTING THE STAT LINE: UPDATED PEAK PROJECTIONS FOR EVERY MILB AND MLB HITTER