Follow Phil (@barrington_phil), Aaron (@SABRtoothTigers), and Ben (@HPBenSanders), on Twitter and read their analysis here at the site!

Dakota Hudson is an enigma. He was drafted in the first round by the Cardinals in 2016 (as part of back-to-back picks with Dylan Carlson; not a bad start to a draft). His stuff would’ve warranted a higher selection, but fell due to concerns about his delivery and control. Just like during his college career at Mississippi State, he found success in the minors, albeit with high walk rates. In September 2020, he underwent Tommy John surgery, a procedure with a track record of sapping control during recovery. Hudson’s future role and results will depend largely on his ability to harness his talent despite the track record and obstacles he faces.

After spending some time in the Cardinals bullpen during his debut in 2018, he burst onto the scene as a starter in 2019 with 16 wins and a sparkling 3.35 ERA. However, that was saddled with a 1.41 WHIP, a lowly 18% strikeout rate, and of course, a far too high 11.4% walk rate. Hudson’s best pitch in college and through the minors had been his sinker, and he keeps that pitch, his slider, and his curveball at the bottom of the zone fairly consistently. He bailed himself out by inducing ground balls regularly. He finished 9th among all pitchers in the league with 20 double plays grounded into. At the time, the Cardinals had perhaps the best infield defense in the league, so it was the ideal scenario for a pitcher like him.

Entering 2020, there were reports of Hudson working on his delivery to improve his command. By any measure, that bore itself out. His walk rate dropped to 9.9%, which is still above average, but far more tolerable. He was seemingly able to spot his breaking pitches better, garnering more swings with pitches on the edge or just outside of the zone. That allowed him to bump up his strikeout rate above 20% for the first time as a professional pitcher. His ERA indicators improved even more drastically than his actual ERA; he finished the season with a 3.58 xERA according to StatCast. Unfortunately, in September of that season, he tore his UCL, requiring Tommy John surgery and halting his progress.

Dakota is ahead of schedule in his rehab of this injury. He was expected to miss all of the 2021 season, but is now several appearances into his rehab assignment. He was up to 68 pitches in his most recent outing, throwing 5 innings in each of the last two starts. In those ten innings, he has allowed just 4 hits. He has just rejoined the big-league club, although his role is still undefined. I expect they will use him for potentially one or two starts in the regular season and certainly during a likely playoff appearance.

The great Paul Sporer has always commented that he likes to see players come back from injury at the end of a season because it sets up their offseason to be closer to normal. With Hudson making this aggressive comeback, he will be in a position to go through a normal routine and be able to work on the things that made him a valuable pitcher before his injury. It is unlikely that he will be able to get enough strikeouts to be a top-tier pitcher, but with his ability to limit damage and harness that Cardinal magic, 2022 could be another high-win, low-ERA campaign for a pitcher still just entering his age-27 season.

The reigning gold glove left fielder, weighing in at an even 200 pounds, hailing from Burnaby, Canada, Tyler O’Neill has arrived. As a minor leaguer, we here in the fantasy community salivated at his 70-grade homer power combined with 55-grade speed, and hoped he would get that 30-grade hit tool figured out in time, when he was drafted in the third round back in 2013 by the Mariners. O’Neill was ranked as the 60th overall prospect in 2016 by MLB, dropped to 75th in 2017, and didn’t appear on any lists furthermore, though the Mariners must have thought they were selling high and moved him to St. Louis in 2017 for pitcher Marco Gonzales.

Your faith was strong, but you needed proof

As OPS leagues are my favorite, I held out hope for O’Neill for years that the Mariners would give him a chance. It was not like they had so many better options. But they didn’t before they jettisoned him to the Cardinals. Here is what O’Neill did in his minor league career: a slash line of .271/.343/.529 with 140 homers, 55 steals in 566 games with 2,138 at bats. That is a large sample, and it gives a pretty good picture of who O’Neill is as a hitter.

First off, he hit a home run every 15.3 at bats, and at the major league level that is on par with Nelson Cruz, Albert Belle, Ken Griffey Jr., and Frank Thomas, to name a few. (The leader in that category is Mark McGwire with a home run every ten at bats, which is (shrinking) nuts). Although he has not played that many games at the big-league level, he still has a home run every 17 at-bats so far in his young career.

I’ve told the truth, I didn’t come to fool ya

Injuries only slowed O’Neill for 2018, where he suffered separate strains to his right groin and left wrist, which required IL stints. Besides those, O’Neill has been healthy. Those injuries also may explain why O’Neill had such a poor debut season in the big leagues in 2018, but his 2019 and 2020 seasons were not memorable either, except for that Gold Glove. Then 2021 happened, and O’Neill has reached the level we (I) knew he could. His stat line thus far (as of this writing) includes 28 home runs, 13 steals, 142 Runs + RBI with a slash line of .282/.353/.536.

Obviously, the bad part about O’Neill is the high strikeout rate. His MLB rate is 33% with a 7% walk rate in 171 career games, and those numbers are about what he has done this season. As we all know by now, that is simply too high a strikeout rate and too low a walk rate for sustained success, right? Well, maybe. In the minors his strikeout rate was 28% and walk rate 9%, so not too far off, and we saw what he was able to do there. If he can up that walk rate just a bit, and drop that strikeout rate a smidge, that will work.

Truthfully, it may not matter, because if he continues to hit the ball extremely hard and show excellent speed (which we can see by his 90 percentile and up Baseball Savant tracking, see below), his BABIP will remain high (as it was in the minor leagues), leading to more hits, homers, and opportunity for steals. The Cardinals seem to know what they have, as O’Neill has been their three-hole hitter, after working his way up the lineup card after starting as the number six hitter to begin the season. 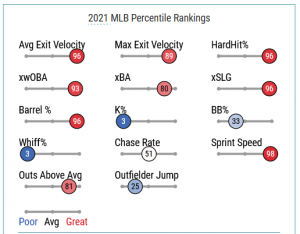 There’s a blaze of light in every word

This was my favorite write-up of the season, since I see O’Neill as a future top-two rounder and dynasty top-25 player. O’Neill is only two home runs away from 30 on the season and once he gets there he immediately will climb rankings, those round number thresholds for some reason do that. Also, he is only two steals away from 15. A player entering his prime age at 26 that can go 30/15 will be taken in the first four rounds of drafts next year. Having Nolan Arenado and another top young outfielder in Dylan Carlson follow you in the lineup bodes well too. To acquire him on your teams may be costly, but maybe not. Push the high strikeout percentage, tell your trade partner he can’t repeat this season, just do what you can to get him on your team this offseason. Like fellow Canadian Leonard Cohen said, “There is a crack in everything, that’s how the light gets in.”

Winn is “one of the more exciting and fascinating prospects in all the minors” according to Eric Longenhagen of Fangraphs. It’s not hard to see why. The Cardinals are developing their 2020 second-round pick as a shortstop and a pitcher, and he has the tools to succeed at both spots. Winn’s foot speed, bat speed and rocket arm give him a chance to be a rare nine-category contributor to a dynasty team.

On The Fast Track

The one thing Winn has continued to do well is run, stealing another 16 bases. That’s especially impressive considering he’s only played 36 High-A games and has been terrible at getting on base. He has good raw power but it hasn’t translated to games yet, as he has just five homers and a .114 ISO across both levels. The potential is exciting, but there’s still much development ahead.

Winn has a flawless pitching record so far – in one whole inning. He faced three batters and struck out one in a high-A game on Sept. 5. About all we can learn from a sample that small is that the Cardinals are still considering developing him as a pitcher, but it isn’t their top priority. Winn has reached 98 MPH on the radar gun and reportedly has a very good curveball, so there’s significant upside on the mound, but he’s going to need more than an inning every now and then to bring it out.

Shohei Me What You Got

Shohei Ohtani’s monster 2021 season has made the impossible dream of two-way superstardom a reality. That doesn’t mean we’re going to see more like him anytime soon. Brendan McKay and Hunter Greene were hyped as possible two-way stars, but Greene quickly abandoned hitting, and McKay might have to do the same after losing the last two seasons to arm injuries. Jake Cronenworth and Jared Walsh were two-way players in college who dabbled on the mound in the minors; given that neither broke out until their mid-late 20s, I have to wonder if that slowed down their offensive development at all.

Winn is a very good prospect but is no lock to be an offensive star, much less the next Ohtani. My advice is to value him like any other raw, athletic shortstop prospect and consider anything you get on the mound a bonus. Don’t get too excited by a good pitching performance here or there; view those as opportunities to hype him up in trade talks and maybe get a steal of a deal.