In April it was all high-fives, clean-up spot homers and smiles for Didi Gregorius and his fantasy baseball owners. In May it’s been a .151/.186/.215 triple-slash line and a bunch of owners wondering what they’ve got in this 28-year-old emerging Yankee star. Things have gotten so bad in May that with Greg Bird’s return (let us all pray for his health right now), Didi has slid down to the sixth and seventh spots in the batting order. I desperately want to use one of my favorite movie quotes of all time here, quoting Jeff Bridges’ epic character from The Big Lebowski, but it’s a bit too off color. Just know, nothing is “messed up” here, even if the rest of the world would have you believe the Didi plane has crashed into the mountain.

A Short History Of The New Didi Gregorius

Once upon a time, there was a baseball player named Didi Gregorius. Lauded for his defense and known for his middling ISOs and wOBAs, Gregorius came to New York in 2015 and looked like the same player he’d always been. Then, in 2016, something happened: Didi realized he could pull the ball and hit it over the wall at Yankee Stadium. So he ramped up his FB% from 31% in the first half of 2015 to 36% in the second half, and continued to build upon that in 2016. By 2017 he was putting over 43% of his balls in the air and was now pulling the ball in the air 44% of the time. His 44/36/21 spray distribution to Pull/Center/Oppo was fueling his home run surge. And it wasn’t just his home ISO that was benefitting, he was also pulling more home runs on the road as well.

So you might be wondering: just what in the hell was going on in April and what in the hell is going on now in May. The short story is that Didi isn’t as good as his April, but he’s also nowhere near as bad as his May. May has been adjustment season for Didi Gregorious.

Now that we’ve got an understanding for what Didi Gregorious is trying to do–pull and elevate–and how well he was doing it in April 2018, let’s talk about the changes in May. First of all, you’ll want to note that Didi was pulling the ball in the air so much that it was unsustainable to do so at that rate. If you’re a stats-nerd like me, you’ll note he was more than two standard deviations above his average Pull% for fly balls. That’s the definition of an outlier for our purposes.

Let’s turn our attention to May, you’ll notice that Didi is now back to pulling the ball in the air between 20-30% of the time rather than the monstrous ~60% he was doing during April. Noting that his average is 37% on pulled fly balls, we should also expect some recovery here. However, it’s worth noting that pitchers are approaching Didi differently than they have in the past.

You can see that in 2015, pitchers were still willing to approach the inside part of the plate with Didi but by 2016 they had gone cold on the two innermost columns of the strike zone. By 2017 they’d moved to even more extreme parts of the strike zone, including trying to get him to chase more below the zone. Now take a look how pitchers approached Didi in May after seeing what he did in April. They’ve moved entirely to the outside part of the zone and he’s getting the “always low and away” treatment that you see many pull-field only power hitters face (E.g. – Marcell Ozuna).

Didi has been pressing during May. His walk rate has plummeted back below his career average, but he’s still striking out at his near-elite rate. 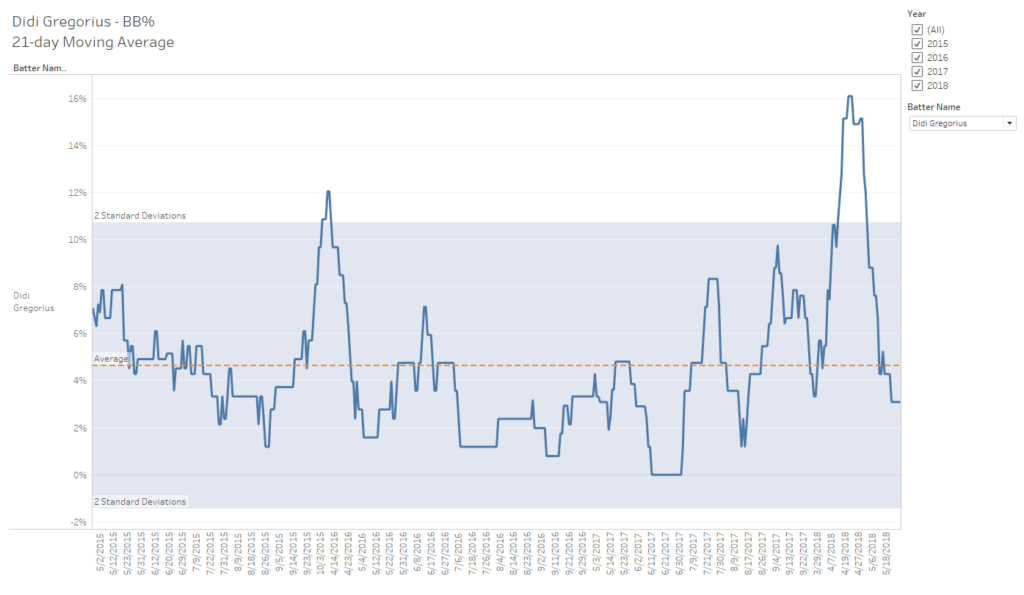 Another thing you’ll notice about Gregorius is that his batted ball profile has totally collapsed during May. While he’s gone through some low points in his career during 2016-2017, this will be his worst month on record since Mar/Apr of 2016. 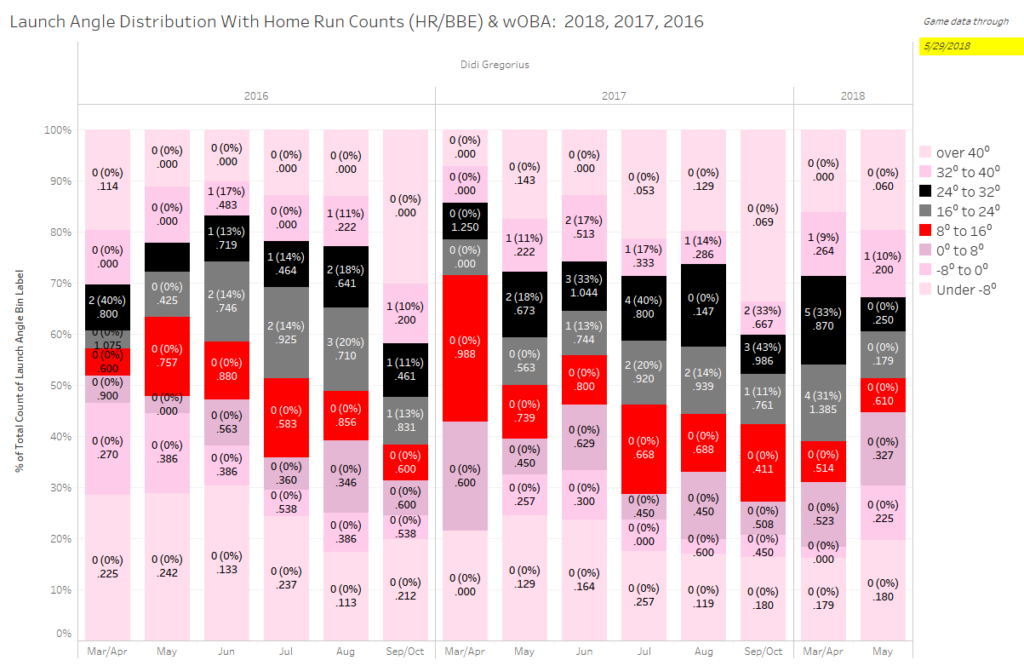 Didi has become too good of a hitter to allow this trend to continue. He will get back to hitting more line drives and optimally launched fly balls, but for now, you’ll have to wait out his adjustment period. Pitchers will still make mistakes and/or Didi will start passing on more of those pitches off the plate and opt for pitches he can do more damage with. Baseball is a game of ongoing adjustments and this is no different for Didi Gregorius.

The impetus for this article was my own trade for Gregorius in TDGx2 near the end of April. I still believe Didi to be a 30HR threat in Yankee Stadium with plenty of R+RBI opportunities. You’ll often hear his average exit velocity cited as a reason to be down on Gregorius, but what’s important is the percent of batted ball events of 95+ mph. This has remained unchanged for Gregorious and in fact, he’s generating a greater percentage of 95+ mph batted ball events to centerfield this year as well (42% vs. career rate of ~20%). Hang in there with Didi, and if you can acquire him while his cost is low, go ahead and do it.