The Chicago Bulls provided a rare, pre-christmas NBA storyline with a 7-0 run following Nikola Mirotic’s return from a teammate induced broken face. As most expected, the run was short-lived and the Bulls have refocused on ping-pong balls. However, in fantasy land, some of these bulls could be league winners in 2018 or in 2022. What should contenders and rebuilders learn from the first half production of certain Baby Bulls? Using Tom Trudeau’s recent dynasty 200 update as a baseline, Kris Dunn, Bobby Portis, Lauri Markkanen, Justin Holiday and Nikola Mirotic will be assessed as buys, sells or holds for contenders and rebuilders.

Markkanen has quieted a lot of negative draft day chatter with a scorching rookie season. In most seasons, where there typically isn’t a Ben Simmons, his stats would have him as a frontrunner for rookie of the year. As a true stretch 4 with decent quickness, he’s a very safe bet to be a high-end contributor in the NBA for years to come.

Despite his clear high level of talent, Markkanen’s fantasy ceiling is lower than the majority of high performing rookies. With .6 steals and .6 blocks per 36, Markkanen won’t help you with defensive stats. While some stats are likely to improve with experience, steals and blocks tend to peak right around when a player enters the NBA. Going forwards, he should be elite in 3s, with additional contributions in free throws, rebounds, points and turnovers. In order to be a top 30 contributor, Markkanen will need to be a mid to high 20s scorer and will need to get his FG% high enough to be average in that regard.

Markkanen should be quickly moved from contenders to rebuilders for guys nearby him on Tom’s top 200. Guys like Lamarcus Aldridge or Marc Gasol are perfect targets for contenders in a Lauri deal. His low fantasy ceiling would make me less nervous to move Markkanen versus other young players with similar year to date performance. As a rebuilder, he’s not the sexiest asset, but should provide top 75 production for a decade and is well worth moving an older veteran for.

Kris Dunn has surprised me. After rating as one of the very worst players in the NBA as a rookie on real plus minus and putting together a paltry TS% of 43.2% in his rookie season, I thought he may be a poor man’s Tony Allen going forwards. Furthermore, at 22, he was one of the oldest rookies in the NBA. Sometimes, GMs are smarter than I am, believe it or not, and Gar Forman looks great for targeting him, and drafting Markkanen, as part of the Jimmy Butler trade.

While he will never be confused for Steph Curry, he has improved his TS% to 49.3 and has shown competence as a three-point shooter. He rebounds very well for a point guard with 4.6 boards in 29.1 minutes this season. Most importantly, he’s a category winner with 1.9 steals a game. Additionally, his block rate is down dramatically from his rookie season and there is potentially room for positive regression there. He rounds out his game as a positive, but not elite, contributor in points and assists. I see him as a younger Ricky Rubio, with his improved driving ability counter-balanced by slightly diminished passing. If his shooting continues to improve, he will take another step forward, but, that is far from a guarantee.

I actually think Kris Dunn is the perfect buy for a team fighting for a playoff spot. In this case, I’d happily float a younger prospect like Marquesse Chriss or Jordan Bell, ranked right above and below him in Tom’s rankings, to grab Dunn. I anticipate Dunn to be the clear best player in that group the rest of the season, while still having a very high ceiling that can be realized by continued improvement as a shooter. I’d sacrifice a slightly better prospect to improve my chances of making the playoffs and hope things go my way in highly variable head to head matchups.

As a contender, Dunn is especially useful on a punt FT% and should be held. As a full rebuilder aiming to contend in two or three years, I think there are better high upside options, like Chriss and Bell. However, those players are likely already on another rebuilder and Dunn should be held onto.

Mirotic has been fantastic this year since returning from injury, putting up top 60 stats with just 25 minutes per game. Interestingly, he has been a very different type of player than the guy who finished 87th and 109th in basketball monster’s player rankings the last two years. His true shooting percentage has exploded from mid 50s his first three years in the NBA to 62.3%. Even more surprising, his boost in efficiency has come alongside an increase in usage. Unfortunately, his defensive stats have suffered as he has seen a large dip in blocks and steals from 1.6 per game last year to 0.9 per game in 2018. Are these changes both real?

Historically, players have tended to improve their shooting percentages through their late 20s or early 30s. Additionally, blocks and steals tend to decrease almost immediately. However, the drastic changes seen with Mirotic’s 2017-2018 season are both aberrations in scale and likely, in part, due to small sample size. Your long-term outlook on Mirotic likely depends on which set of changes you believe. Personally, I anticipate the steals and blocks to revert to historical averages more than his shooting percentages and usage. Thus, I am more bullish on Mirotic’s prospects rest of season and beyond. Additionally, I anticipate low risk on his minutes and high reward. Fivethirtyeight’s CARMELO forecast had him as 3+ WARP the past three seasons and his performance this year has been his best to date. I would be very surprised if he didn’t average at least 25 minutes over the next 5 years, with the potential to be in the 30s given his skill set.

As a contender, his situation gives me pause. Even if he is traded, he may be traded into a suboptimal situation where he is playing around 20-25 minutes. Additionally, his age means fantasy owners are unlikely to give him up cheaply. Thus, he would not be a buy for me, but his high floor for the rest of the season means I’d be happy to hold onto him and ride him to the playoffs and beyond.

As a rebuilder, I’d actually consider him a buy if you have an older player valued similarly. 26 is still young and he has a top 25 ceiling with 30+ minutes and positive regression of defensive stats. I anticipate him to outperform nearby names like Al Horford, Marc Gasol and Kevin Love by 2020 at the latest, when he should be entering his prime.

Bobby Portis also seems to have returned from the broken face incident a better basketball player. Like his fellow front court mate and boxing partner, Portis has seen an increase in his TS%, alongside a large increase in usage. Particularly exciting for fantasy owners is his .9 3s a game on 36.3% shooting. Unfortunately, his block rate and steal rate are both quite poor at .5 and .6 per 36 respectively. As with Mirotic, I buy there has been an underlying improvement in shooting. However, there is no positive regression potential with blocks and steals, as he has to shown historical utility in those areas. He also is starting at a much lower baseline for 3s and I don’t see him ever being the shooter Mirotic or Markkanen is. I do see clear minutes improvement upcoming with the likely trade of Mirotic

I’d like to say there is a nice swap to be made with Portis, but I think his current value and future value are pretty similar. I don’t see a high ceiling for him going forwards and think his usage and minutes will be very high rest of season if Mirotic leaves. He was not a lottery pick and has not projected well in Fivethirtyeight’s CARMELO projections. I expect him to be a borderline top 100 contributor this year and in the future.

Justin Holiday has been fantastic the first half of the season, particularly in head to head leagues for punt FG% teams. Outside of FG%, he is neutral or helps in the remaining 8 categories. With 1.1 steals, .7 blocks and 2.4 3s a game, he has won lots of teams a few weeks this year. Zach LaVine will be returning soon and I anticipate that will dramatically impact his playing time. Additionally, given the youth of the Bulls, there is a chance he gets moved to another team to fill in some backup minutes.

As a contender, I’d happily pay some FAB or move a similarly valued player with less current opportunity to grab Holiday. On 4 game weeks, even with limited minutes, he should provide value for the rest of the season. His price tag is likely lower than basically anyone else with the potential to provide top 100 value.

As a rebuilder, I wouldn’t move him for a Kennard, Okafor or Kaminsky. I think his value is stunted by the potential to lose minutes going forwards. I’d wait until the trade deadline to see how his minutes evolve. If he maintains playing time, or suffers a smaller decline than anticipated, you may be able to get a legitimate piece a month from now. No tears will be shed for missing out on mediocre prospects with low ceilings. 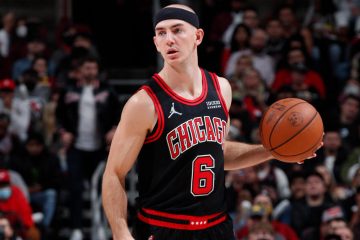