Austin Hays is a top-25 dynasty prospect. Most major publications barely regard Hays as a top-100 prospect, but this Orioles’ outfielder is a high-end asset to own in dynasty leagues. With most fantasy owners listening to the mainstream voices, it is the perfect time to trade for Hays. Underrated and primed to make an impact at the big league level this coming season, Hays is a long-term investment that can also pay immediate dividends.

The Orioles drafted Hays in the third round of 2016 Amateur Draft (91st overall). Assigned to Low-A, Hays hit the ground running with a .336/.386/.514 line over 153 plate appearances. Hays made the leap to High-A to kick-off this past season and, again, took the league by storm. Over 280 plate appearances, Hays slashed .328/.364/.592 with 15 doubles, three triples, and 16 home runs, totaling an incredible 34 extra-base hits in 64 games. Among players with over 200 plate appearances in the Carolina League, including several elite prospects (Eloy Jimenez, Kyle Tucker, and Victor Robles), only Michael Chavis outperformed Hays by wRC+.

On June 20th, the Orioles promoted Hays to Double-A Eastern League. Remarkably, Hays’ performance closely mirrored, and ever so slightly improved upon, his performance in the Carolina League. In the same number of games (64), Hays banged out 35 extra-base hits with 17 doubles, two triples, and 16 home runs, slashing a nearly identical .330/.367/.594.  Again, only one player with over 200 plate appearances in the league, Scott Kingery, hit for a higher wRC+ than Hays.

On September 5th, a day before the Eastern League playoffs, the Orioles surprisingly promoted Hays to the majors.  An incredibly rare achievement for a hitter, Hays arrived in the big leagues in his first full season of professional ball. Of course, Hays struggled in his brief cup of coffee with an OPS of just .555, but Hays rarely disappointed in his ascendant campaign. Entering 2018, at just 22 years old, Hays is knocking on the door of the majors.

An aggressive competitor, Hays makes the most of his skills. With a muscular six-foot frame, Hays has significant pop, especially to the pull side. At the plate, Hays works with a short leg kick and creates all-fields, hard contact with excellent bat speed and a simple swing.  Hays also utilizes above-average speed to take the extra base and contribute a handful of stolen bases.

Hays has a tool chest of potentially above-average tools on the offensive side, with the well-versed hitter showing the ability to produce at a level greater than the sum of his parts. If everything falls perfectly for Hays, he could develop into an above-average hitter with plus power at peak.  A lazy offensive player comparison for Hays is Orioles mainstay Adam Jones.  In his prime, Jones was a perennial top-ten outfielder and borderline first round pick.  This is, undoubtedly, Hays’ peak, but it is not an unattainable outcome.

With that said, Hays is not without his warts.  Hays’ aggressive approach touches upon all parts of his game and, most worrying, his plate discipline. This again brings back the Adam Jones comparison, just not in a good way. In 626 plate appearances last year across all levels, Hays walked only 27 times, “good” for a 4.3 BB%.  Fortunately, Hays also limited his strikeouts to a 16.1% clip.  Hays’ present approach obviously is a drain on his on-base percentage and, barring further improvements, could limit his hit tool.

In addition, Hays has shown himself to be a rather extreme pull hitter, hitting balls to that side over 50% of the time. 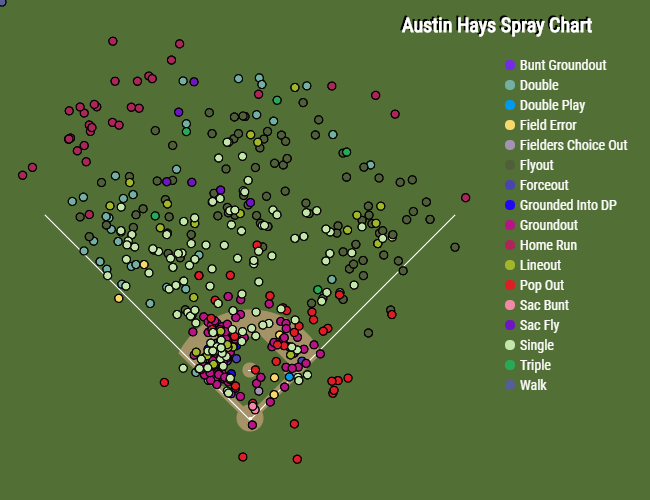 In fact, of Hays’ 37 professional home runs, only four are to right or right-center field, including his first major league home run. For context, over the past three years, only 12 qualifying players had a pull percentage over 50%, including several repeat offenders (Brian Dozier, Carlos Santana, Jose Bautista, and Edwin Encarnacion).  While a pull-heavy approach is far from fatal, it welcomes defensive shifts and unfavorable pitching approaches.

As of this writing, Austin Hays is likely the starting right fielder for the Orioles in 2018.

Other than Adam Jones and Trey Mancini, the only other outfielders on the Orioles’ 40-man roster are Joey Rickard, Anthony Santander, Jaycob Brugman, and Mark Trumbo.  Outside of Trumbo, who played the field in just 31 of 146 games last season, these are uninspiring options.  Rickard and Brugman are, at best, fourth outfielders, and although Santander possesses an intriguing bat, he is a below-average defender. Given the Orioles’ defensive struggles last season (only the Oakland Athletics’ outfield graded out worse defensively), Hays would provide a much-needed boost between center and right field.

Arguably, it would be in the best interest of the organization to start Hays at Triple-A Norfolk to suspend his service-time clock and provide Hays more upper level experience. The Orioles, however, often do not necessarily behave rationally. As recently as last year, the Orioles disregarded service-time considerations with Mancini. Even if the Orioles trade Manny Machado prior to the start of the season and commit to rebuilding, Hays has a solid chance to break camp with the team. Either way, Hays should be in the big leagues by mid-season.

In the short-term, the fantasy community also underrates Hays.  Hays’ current average draft position on Fantrax is 361st.  Additionally, Fake Teams recently ranked Hays 446th overall and 110th in the outfield. While his big league hiccup warrants some skepticism, Hays has done nothing but hit elsewhere and likely receives significant playing time this year.  Early projections from Steamer and ZiPS are positive and generally reflect my own expectations for Hays this year:

This type of anticipated production makes Hays a top-200 player and a steal at his current draft position. Buy in single-season leagues, buy in keeper leagues, and, of course, buy in dynasty leagues.