Chicago Cubs’ players don’t often fly under the radar in fantasy leagues, yet despite playing on one of marquee teams in baseball, Kyle Hendricks has managed to avoid the spotlight thus far. And he’s done so despite coming off a season in which he posted a solid xFIP and nearly a strikeout per inning, while finishing in the top 40 in cFIP and DRA among pitchers throwing a minimum of 100 innings. Now, after performing well in Spring Training, Hendricks looks to have a rotation spot locked up for one of the World Series favorites. If Kendricks continues to improve on his underlying stats from 2015, there’s potential for SP2 value at a discounted price.

After Hendricks came over to the Cubs from the Rangers in a deal for Ryan Dempster in 2012, the right-hander pitched well across three minor league levels through 2013, including a 3.28 ERA over 142 Tripe-A innings. That was enough to earn an interesting if unspectacular call-up in 2014; despite a 2.46 ERA in 80.1 innings, Hendricks’ peripherals pointed in the opposite direction, as he finished with a 3.92 xFIP and just over five strikeouts-per-nine.

Fast forward to 2015, and Hendricks was able to up his strikeout rate considerably over a full season of starts, to almost a batter per inning while finishing with a 3.25 xFIP. But this time, his peripherals flipped, giving him a near 4.00 ERA to close out the season. Notwithstanding the high ERA, Hendricks showed solid progress towards becoming a fantasy contributor for seasons to come.

The biggest change Hendricks made in 2015 related to his pitch selection and sequencing. According to Brooks Baseball, last season the right-hander ditched his cutter, especially in late counts, leaning more heavily on his sinker. In his debut, Hendricks threw his cutter 16% of the time to left-handed hitters, and 11% to right-handers, generating only a seven percent whiff rate. Last year, those totals were 5% and 3% respectively.

Abandoning the cutter allowed Hendricks to lean more on his bread-and-butter pitch, the sinker. Hendricks was second in the majors in runs-above-average for sinkers, and the more frequent use of his sinker raised his groundball rate to over 50%. And that was an important development, as the fly balls that were hit against him were a huge bugaboo in 2015, leading to a well-above average HR/FB ratio. Hendricks’ ground ball rate was good enough to finish in the top twenty across the majors, and with the Cubs’ infield finishing second in defensive efficiency on ground balls last season, Hendricks’ propensity for burning worms helped him considerably.

Hendricks also leaned much more heavily on his changeup in 2015, this time using the pitch a bit more when behind in counts. Keeping hitters off-balance, Hendricks was able to generate a swing-and-miss on over a quarter of changeups he threw, a well above-average rate. He upped his changeup usage to nearly 40 percent of the time with two strikes, and that was the primary driver of a his massive jump in strikeout rate.

It isn’t all sunshine and lollipops, however. One of Hendricks’ biggest problems has been opposing batters getting familiar with him throughout the game. Hendricks allowed a monstrous .329/.374/.520 triple-slash line while facing an order a third time. Those poor numbers coupled with Joe Maddon’s tendency to go to his bullpen early if needed, had Hendricks finishing near the bottom of the league in IP/GS and Quality Start percentage. Maddon probably isn’t going to change his predispositions, so unless Hendricks makes additional adjustments he’ll continue to pose more of a risk of a shortfall in Wins than his topline production suggests.

So far this spring, Hendricks has done nothing to quell his fantasy value. Before his latest start where he allowed four earned runs, Hendricks was stellar, posting a 1.89 ERA through 19 innings, striking out a batter-per-inning, while walking only two. Those stats were enough to earn him the fifth spot in Chicago’s rotation over newcomer Adam Warren. Even if the Win potential doesn’t increase, his potential for contributions in strikeouts, ERA, and WHIP, make Hendricks a smart mid-rotation play, and he’s unlikely to command a higher pricetag than that. If he can jump his innings (and Wins), the potential for surplus value comes into play.

Overall, Hendricks’ evolution with his sequencing and pitch deployment has helped him evolve on the fly as a very useful fantasy pitcher. The formula he flashed last year – relying on groundballs, avoiding the longball, and striking guys out – is an awfully good one. The upside here is an ERA in the lower threes, a whiff an inning, and a usable WHIP. Since March 1st, Hendricks’ ADP has been 82nd for starting pitchers. If dynasty leagues can get a similar SP4 – SP5 price for Hendricks, there could be significant value built in for him. 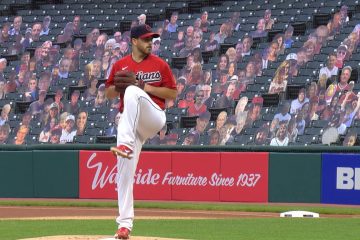