Let’s play a guessing game. At the end of August a 23-year-old pitcher in his second full season had just finished a dominating month which saw his yearly ERA fall to a season best 2.69. His record stood at 15-4 with a WHIP of 1.12 and he had the fortune of playing for a perennially excellent team in a favorable environment. Basically, he was a stud who had everything going for him. Prorated over the remaining month, that’s about as valuable as David Price is projected to be this year. So who is this pitcher where would you be valuing him this year?

Unfortunately for Michael Wacha, September happened. For the second straight year, he faltered in the second half, ruining an excellent statline and raising questions regarding his health, stamina, and consistency. An optimist might point out that at least it was only one bad month of a seemingly healthy season, after his 2014 campaign went bad in June when he injured his shoulder.

A deeper look at what went wrong in September is key in determining whether or not Wacha is who he appeared to be through August or if he is fated to be inconsistent. His game log shows that he really only had two clunkers in September, Both outings resulted in six earned runs, multiple homers, and too many baserunners. The rest of that month was marked by a decline in strikeout rate of about ten percent, an increase in walk rate of about 250 percent, and a home runs per nine rate that increased by a factor of five. Not good!

The table below shows his velocities for all games from August through September with his bad games bolded. As you can see, there was no apparent drop off, so while a loss of velocity is often a leading indicator of an injury, so far so good.

The heat maps below show the location of Wacha’s pitches split into pre and post-September 1. A fairly obvious shift of pitches in the strike zone to away and low-away is apparent. That could certainly explain the elevated walk rate.

A more disturbing trend is illustrated by his horizontal release point. It shifted by close to a foot towards the first base side of the rubber. There isn’t any real pattern to the data on his vertical release point as it’s surprisingly erratic. I matched his game log up with the data points from Brooks Baseball and in general, his worst games, both from a runs, strikeouts, and walks perspective, came on days in which is horizontal release point shifted significantly towards first base and his vertical release point dropped. The general conclusion that I come to is that the change in higher pitch density was due to altered mechanics and most likely not intentional. A pitcher may well intentionally drop his arm angle but the intent is generally to achieve arm side run and is done by sinker-ballers and pitchers who feature a two-seamer. Wacha is neither of those. His primary fastball is a four-seamer and he mixes in the occasional cut fastball. Both of these pitches are more effective when thrown over the top. Wacha likely compensated for his lower arm angle by throwing across his body resulting in more low-and-away pitches. See the diagrams below for more detailed information regarding release point.

So the question is: Was an injury the reason for Wacha’s varied mechanics and the decline in performance that accompanied it? Considering that he has had documented shoulder issues in his recent past it seems quite possible. That being said, his velocity remained at 95-plus mph so I would tentatively conclude that whatever issues he had were more of the general fatigue type rather than serious structural issues. It’s easy to forget that his workload increased by nearly a factor of two as his innings jumped from 107 to 181.

As a note, Wacha has had a very poor spring to date. This comes with all the usual caveats regarding the significance of spring training statistics and the most recent article regarding Wacha describes a team directed focus on improving his efficiency through cut fastball usage. That being said, I tentatively give Wacha my seal of approval. Just don’t overpay or reach for him. 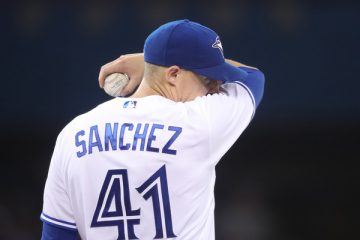 What Player Raises His Stock The Most In 2016?