Last week I covered the second half of the second round of a 20-team dynasty league’s minor league draft. To check that out, click here, and within that link is a link to a previous iteration of this exercise that full explains the league settings/structure. From there it’s just links within links until it becomes a fractal.

Puello is fine. There’s just not a ton to get excited about. I think he caps out around a 2nd division outfielder, which is normally the type of guy I love (see: Arcia, Oswaldo) because they tend to be undervalued, but I guess I see him more towards the bottom of that tier than the top. I’m probably underrating Puello here. His tools are nice, but his future home park isn’t great. He should be a big leaguer in the not too distant future.

I’m a bit surprised he lasted this long, though he hadn’t reached full season ball yet, so distance to the majors was likely a factor. The ceiling here is huge – a potential number two starter in both fantasy and real life – but the path is fraught with risk. Still, tremendous value at this point, and absolutely someone I considered with my second round pick as well.

Thorpe got blown up by some of my colleagues at BP, and there’s good reason based on the tools. I don’t think he’s a great fantasy add though, falling under the same theory that I’ve discussed with J2 prospects. He’s so far out and so raw, that even large steps forward would only get him to full season baseball by year’s end. There’s a good chance he doesn’t touch short-season baseball this year. We’re looking at a five year timetable and that’s just too much to waste a roster spot on.

Gohara should move faster than a guy like Thorpe but his ceiling isn’t nearly as high and he’s got plenty of risk given his age. It’s a fine get, but the body is ugly and could age poorly, and combined with limited upside, I’m not in love with the value. I don’t hate it, but it’s not ideal.

I don’t think he’s a shortstop long term, which harms the profile because the bat might not play well elsewhere, but the kid can straight up hit. The power might be limited due to Barreto’s frame, but again, this late in a draft like this getting a hitter as pure as he is can hardly be knocked.

He’s already reached the majors, a bit of a surprise given the relative nascence of his game. He was a football player in college and always old for his level, which might explain why the Padres were comfortable jumping him straight to the majors. He’s fast but can’t hit for power and the hit tool is a big question mark. I’m fine with taking that chance this late in the draft though, as usable steals are a nice resource.

I don’t like Travis at all and think too much hype was given this offseason. Once again this owner’s penchant for close to the big league prospects with limited overall profiles shines through. I don’t have much to say here because I don’t think there’s much to talk about. He’s more utility man than second division starter to me.

This is another value I like this late in the draft. The difference between Mejia’s ceiling and some of the arms taken immediately before him isn’t that large and while there might be more risk, I trust San Francisco to develop arms better than most other orgs.

Jagielo (Jah-guy-low) never did it for me. Maybe it’s the Notre Dame on him, maybe it’s the limited power profile but either way I’m not on it. There’s nothing that pops with Jagielo and ultimately I think the lack of power does him in because he doesn’t have the hit tool to make up for it (like Moran potentially does). He should be able to beat up on the lower minors a bit, but I’d expect production to flag at the Double-A level.

A player I considered all the way back in the second round and a guy I like even more than Mejia at the moment. Gonzalez lacks the ceiling that Mejia, et. al. provide but I think he’s a sure fire major league. He won’t miss bats at an elite level but he shouldn’t have too many problems with free passes either, and he can move relatively quickly. 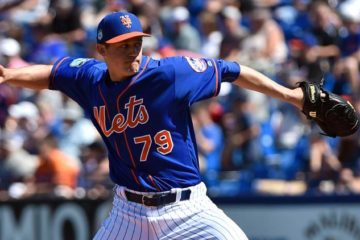