When I first pitched this series, I made it pretty clear that I wanted some collaboration between me (or another TDG writer) and our readers in terms of selecting players you want to read about. That’s why it was pretty encouraging yesterday when I took to Twitter to ask for Prospect Smackdown ideas and got a handful of very strong suggestions.

The match up you’re going to read about today game from fellow TDG writer and scholar/gentleman Mike Buttil, who posed that I cover two of everyone’s favorite center field prospects from the 2012 draft: Albert Almora and David Dahl.

And so one week after we saw Yordano Ventura defeat Carlos Martinez in the battle of diminutive flamethrowers, we now take on oft-injured, five-category outfielders who are still a ways away. Enjoy!

Prospect Smackdown No.4 – Who is the better fantasy prospect: Albert Almora or David Dahl?

The case for Almora

Widely regarded as one of the best overall players available in the 2012 draft, Almora has done nothing to hurt his lofty prospect status to this point. Despite missing a good chunk of 2013 with various injuries, Almora was able to hit .329/.376/.466 in 272 PA in Single-A, striking out just 11 percent of the time and hitting 17 doubles. As a player renowned for his maturity, it wouldn’t at all be surprising to see Almora succeed at High-A in some point in 2014, which would put him on pace for a late 2015-to-mid 2016 MLB debut.

What makes Almora an attractive fantasy asset is his well roundedness. Almora doesn’t project to have light-tower power or blistering speed, but he should contribute meaningfully in every standard 5×5 category, with added value in OBP and doubles leagues. Forecasting stats for a player this far out is a fool’s errand, but no one has ever not said that I’m a fool or that sentence structure is my strong point. If you want to dream on him, a .320 average with 15 homers, 20 steals, 80-plus RBI and 90-plus runs batting near the top of the order would look mighty nice.

The case against Almora

Almora has no weaknesses, but it might be fair to say that his hit tool is his only real fantasy strength, too. If his power doesn’t fully develop or he loses a step as he ages, how different is he as a fantasy prospect from, say, Jackie Bradley Jr.?  There’s a risk that Almora turns into a .280 guy who only challenges for double-digit homers and steals, which basically makes him 2013 Michael Brantley. Essentially the floor here is very high, but the ceiling is well within view, and Almora is a slightly better MLB prospect than a fantasy one.

The case for Dahl

Quite simply, all of Dahl’s tools aside from his hit tool are better than Almora’s. When healthy, Dahl has a plus (potentially plus-plus) hit tool, plus speed and the potential for plus power, although that is his most questionable fantasy tool. Dahl’s stock was so high heading into 2013 in part because he hit .379/.423/.625 with 12 steals in 306 PA in rookie ball in 2012, blowing away the competition. He received just 42 PA in 2013 though, thanks in part to a suspension for missing a team flight and mostly to a torn hamstring suffered in May.

That being said, Dahl is largely the same player headed into 2014 we thought he was heading into 2013, and we loved what we saw back then. If you want to dream on Dahl he can be another .300-plus hitter, but potentially with 30-plus stolen bases (if his base running acumen improves) and with double-digit homerun power that will play up in Coors. From a statistical standpoint, the end game here could look something like the good version of Alex Rios. That’s a hell of a fantasy asset, especially near the top of the order and in Colorado.

The case against Dahl

Is it easy to forgive Dahl for missing all of 2013 thanks to his hamstring tear? Yes. That doesn’t mean he gets that time back, though, and it’s tough to put an ETA on Dahl before 2017. He has basically his entire professional development ahead of him, meaning there’s plenty of time for more obstacles to derail what could be a superb fantasy career. We’ve also seen reports that Dahl’s speed plays down in games, and while there’s time for him to become a more refined base stealer, there’s no doubt that the profile loses some luster if Dahl can’t swipe 30-plus bags a year like his pure speed would suggest. Couple the speed question with power that is mostly projection at this point, and Dahl is more dream than reality at this moment in time. 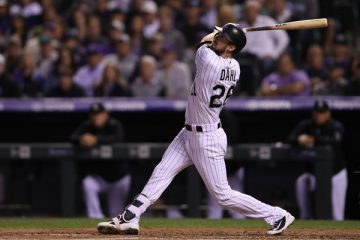 The 2014 Dynasty League Rankings and Beyond

Bouncing Back: A Blank Slate (Pitchers)

Between the Numbers – Casey Mize

Scotty R
on TDG Roundtable: Players Who Would Benefit From A Trade