There are certain players in fantasy baseball that just kill you. You don’t know what to do with them. You start them, they go 0-4 with 3 K’s. You bench them, they drop a 3-4 with a dinger, stolen base, and 6 R+RBI on your pine. It’s just the nature of the beast, and if you’ve played fantasy baseball long enough I guarantee you’re currently nodding your head and muttering to yourself about one or two of these guys right now. And in dynasty leagues these guys are all the more problematic. Not only because they have the potential to torture you for multiple seasons, but because you’re stuck with the conundrum of whether they’re worth the longterm hassle or not. For over five years now no player has been more THAT GUY for me than Justin Upton.

Upton has the kind of prodigious, unquestioned talent befitting a #1 overall draft pick, and he’s shown so many flashes of that talent at the Major League level since busting down the doors of a big league clubhouse at the tender age of 19. I acquired him in my longest-running dynasty league in 2008, fully understanding that, since he was 20 years old at the time, I was investing in a long con that likely wouldn’t pay out in peak level performance for several years. But I was willing to wait for a talent of Upton’s pedigree, and I was rewarded with a 2009 that brought hope of a superstar breakout: a 20/20, 130 wRC+ season as a 21 year old. Jackpot!

But alas, not so fast. 2010 dragged his 22 year-old, barely-able-to-legally-drink self back down to earth. While he wasn’t bad, he lost 100 points of OPS and 62 points of ISO en route to a 17 homer season with 28 fewer R+RBI.  He was still better than league average, but it was decidedly NOT the step forward fantasy owners had expected (and paid for). Then 2011 happened. A .289/.369/.529 triple slash rebound in his age 23 season that was good for matching 141 OPS+ and wRC+ figures. 31 homers, 21 steals, and just south of 200 R+RBI. He did this, mind you, as a 23 year old. The sky looked like the limit for young Upton entering 2012, and he promptly responded with another thorough dud of a season for fantasy owners. He suffered a power-sapping thumb injury in late April and never really found his longball groove. His GB% spiked 7% from the previous year and he again managed just 17 homeruns. Given his 13.4 ADP he succeeded in torpedoing many a fantasy championship aspiration, mine included. He also landed in Arizona GM Kevin Towers’ dog house, apparently lacking a requisite amount of The Will To Win, and Arizona shipped him off to Atlanta for a fresh start last offseason.

Fantasy baseballers appeared undeterred by the down year and transition to a less hitter-friendly home field, however. He remained among the most popular breakout/bounceback candidates last spring and was again drafted around the turn in most 12-16 team redraft leagues. And for that one, sweet month of April…holy hell did it look like he was finally going to put together the magic season we’d been waiting for. As Bret excitedly pointed out at the time, he swung at fewer pitches, he hit more fly balls, and the combination led him to one of the most impressive displays of early-season power any of us have seen this side of Chris Shelton.

And then…thud. For the next two months he hit an unplayable .218/.321/.303 with 3 HR, 18 RBI, and 3 SB. He started to turn things around in July, threw down an April-esque domination of August (185 wRC+ with 9 homers), then cooled off again down the stretch – conveniently just in the nick of time for standard head-to-head league playoffs. The end results were a mixed bag: his 27 homers and over 160 R+RBI were strong in standard 5×5 leagues, but he took a big step back in the stolen base department (8 steals, down from four straight 18-21 seasons) and batting average (.263, down from .280). All in all it was a frustratingly Jekyll-and-Hyde year in what has been to date a frustratingly Jekyll-and-Hyde career.

So the question for dynasty leaguers: now what? What do you do with a player like Upton? Despite just now entering his age 26 season and his physical peak years, he’s already logged 3,673 plate appearances over 5 and a half full season’s worth of Major League games played. There’s a defined body of work to look at, and while the easy knee-jerk reaction is to again point out that he’s just 26, the likelihood that he suddenly becomes a steady performer after years and years of up-and-down performance continues to diminish by the season. Adding to the confusion, the Braves “swing for the fences” offensive philosophy appears to have taken a decided toll on Upton’s tendencies at the plate. Upton’s overall contact percentage plummeted over 5% this past season, and most strikingly it was not  on account of him chasing more pitches outside the strike zone. He actually swung at fewer balls out of the zone last year, but his Z-contact % – the amount of contact he made on pitches he swung at in the strike zone – collapsed by over 8%. More swinging and missing at strikes is rarely a good thing for a hitter, and it suggests Upton was following an organizational philosophy of selling out for power on pitches in the zone. If hitting coach Greg Walker is retained for another season as expected it makes the potential for a batting average rebound that much more uncertain. This, coupled with another organizational philosophy that significantly restricted Upton’s stolen base attempts last season, seems to point to a more limited upside for Upton as more of a 3-category play in 2014.

Dynasty league owners will unfortunately remain stuck in the middle, and likely stuck with Upton. The potential is still there for him to put together a 35-40 homerun season and, with a well-timed hot streak, carry a fantasy team to championship glory. Problem is, given the inconsistent track record to date it’s an awfully tough sell to find a leaguemate willing to pay for such a breakout as if it’s a certainty, and that means owners are likely looking at the prospect of a significantly diminished return relative to ceiling if they do seek to cut bait. 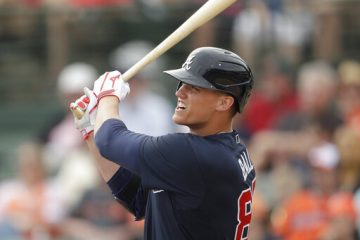