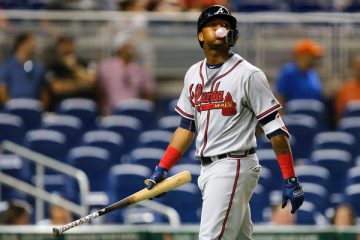 Your senior dynasty analysts enter the second season of the Triple Play! The regular feature breaks down an arm, a bat, and a prospect within each organization for your reading pleasure! Listen to Adam (@TheStatCastEra), Keaton (@TheSpokenKeats), and Patrick (@TheGreenMagnus) on the Dynasty’s Child podcast and read their other analyses here

Keaton and Jake discuss the top 600 with resident rankings guru Jesse Roche. To all the fans of the pod, please rate and review us on your iTunes or Stitcher app. Every bit helps! League Transactions Josh Donaldson to Atlanta (3:00) CJ Cron, Tampa Bay/Minnesota (4:30) James Paxton traded to

Julio Teheran has been a fantasy stud the last two seasons, fulfilling the hopes of dynasty leaguers who have watched him grow from an uber-elite prospect into a legitimate ace hurler. Still only 23 years old with his health intact, it seems he is poised to dominate the league for

Underestimate Freddie Freeman at your own peril. I have seen too many people pass over Freddie Freeman in fantasy baseball drafts. The most common complaint about Freeman is that he supposedly doesn’t hit enough home runs, especially for a first baseman. Well OK that is true to some extent. But

There are certain players in fantasy baseball that just kill you. You don’t know what to do with them. You start them, they go 0-4 with 3 K’s. You bench them, they drop a 3-4 with a dinger, stolen base, and 6 R+RBI on your pine. It’s just the nature

On the surface, Mike Minor’s 4.12 ERA in 2012 is about as bland as it comes. And with Thanksgiving a day away, bland is unacceptable. We want succulent turkey, the sweetest cranberry sauce imaginable and all 21 of Craig Goldstein’s pies. Seriously. He’s making 21 pies. But if you were

We are all aware of what Andrelton Simmons can do in the field. We’ve seen and used the #andrelted hashtag. We’ve all looked at that picture and felt inadequate. As fantasy owners though, what exactly is Andrelton Simmons to us? His 2013 was more and less than we expected in

Read More
Andy Barnes
UncategorizedWhat To Do About...

If you have been following along all week here at TDG, you have read almost a dozen articles about players that we believe can be quality last minute additions to your roster before free agency ends. If you listened to our advice, you could have very easily turned over your

61.6k Views By The Dynasty Guru