Dynasty Leagues and Trade Vetoes: Wrong For You, Wrong For America

It’s been way too long since I wrote a post about trade vetoes, but I want to get a little more specific on the topic here, as it relates to dynasty leagues. First of all, let me get the disclaimers out the way. I am very much against trade vetoes in general, and prefer not to play in leagues that have them. In redraft leagues with money on the line, I understand the fear of having collusion–but some owners do tend to use the “specter” of collusion to rail against trades they don’t like. Additionally, just because a league does not have a rule on trade vetoes doesn’t mean that a singular deal cannot tear apart the fabric of that league’s existence. I’ve seen this with my own eyes, as I will attest to later.

The fact is that no one should be told how to manage their teams. And in keeper/dynasty leagues, this holds even more water. For example, if you had the foresight to be a believer in Jean Segura or Carlos Gomez in 2012 and were willing to “overpay” to get them, you’re probably pretty happy right now–and for good reason. But in order to really get into the meat of the conversation, I’m going to use two examples of trades which I was involved in over the past couple of years.

In the league that I wrote up for the Rebuilding a Dynasty League Roster series last year, I talked about some of the initial trades that I made. One of those trades in particular got the most attention from league mates and readers, saying that they were amazed that trade wasn’t vetoed. That it was just a major leaguer playing over his head and a closer who was about to lose his job for two high-profile prospects and a very solid replacement. It was an absolute no brainer at the time, but take a look at it again now and tell me whether you think it’s such a slam dunk anymore. Actually, just tell me which side you’d prefer:

In June of 2012, I traded Chris Davis and Jonathan Broxton for Oscar Taveras, Casey Kelly and Chipper Jones.

Did the owner who now employs the services of Chris Davis know that this was the type of player he’d be getting? Probably not. But he saw something in Davis’ performance which said this was a guy he wanted to invest in for the future. And despite being told he was wrong at the time, he was completely right. To be honest, I don’t know which side of this trade I prefer right now.

Now, with example #2, we’re going to go a little further back in time. I used to be the commissioner of a keeper league, which has since folded. In fact, it folded as a near direct result of a singular trade which I made that was ultimately upheld by a league judgment committee. In this league, there were five keepers from year-to-year and a three player farm system. The keepers were based on auction values. That’s the general set up. My team was in first place and needed an arm. The team I traded with was near the cellar and wanted a minor leaguer to carry into the next season. The following is what happened:

At the time, Bumgarner was arguably either the best or second best pitching prospect in the major leagues and Lester was in the midst of the best stretch of his career. Literally, every owner in this league made it known that they thought I was completely ripping this other owner off–and the scars of this trade ended up running deep, as the league folded the following season. Of course, if the league had not folded, the team who I traded Bumgarner to would have reaped great rewards from this deal–since Bumgarner has now outperformed Lester in each of the last three seasons, and is more than five years his younger.

The moral of this story is that while trade vetoes are a very bad idea in redraft leagues, they make absolutely no sense in keeper/dynasty leagues. A veto process is a good way for commissioners to make sure that other owners aren’t able to get better offers for their players than you are. It’s a way to control the masses and tell other owners how they should be valuing their own players. So if you are in a league where vetoes are a part of the fabric of the league, first of all, I’m sorry. Second of all, talk to your commissioner and/or other owners and find out why that’s in your league constitution–then try to get it removed. You can tell them the Dynasty Guru sent you. 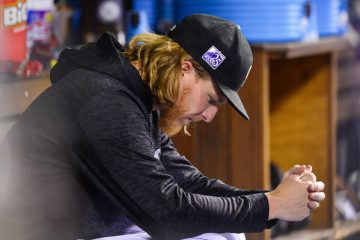 Hold On for One More Day? Dealing with Slow Starts

Why Isn't Anyone Talking About Nick Castellanos?

Dynasty Leagues and Trade Vetoes: Wrong For You, Wrong For America