As part of a continuous effort to understand minor league performance, I built a simple batting average on balls in play (BABIP) adjuster to better account for luck. Using a sample over 2,000 minor league performances this year, I simply regressed wOBA on BABIP, strikeout rate, walk rate, and isolated power. This model shows linear wOBA changes for a given change in BABIP. It’s a very simple model, and doesn’t account for BABIP’s relatively slight impact on isolated power*, but it offers a reasonable approximation of BABIP’s impact on wOBA anyway.

*It’s possible for high BABIPs to regress toward more home runs and consequently higher isolated powers rather than outs (since BABIP doesn’t capture home runs), but most of the regression likely should be toward outs.

The rest of this article will highlight a few BABIP under and over-performers in the minors this year, and show how their peak MLB wOBA translation is impacted by BABIP.

Drew Waters has a remarkable .439 BABIP in the Double-A Southern League this year, and is thus an instructive example for thinking about BABIP. His high BABIP is, to some extent, indicative of an excellent hit tool—it’s a mistake to simply ignore his minor league BABIP. However, .439 is extreme and almost certainly driven by incredible fortune. Right now, Waters’ .384 minor league wOBA translates to a .399 peak MLB wOBA, which would make him among the top hitting prospects in baseball by this metric. See the chart below for context on peak MLB wOBA, the distribution of all minor leaguers this year (minimum 130 plate appearances, Single-A experience or higher). 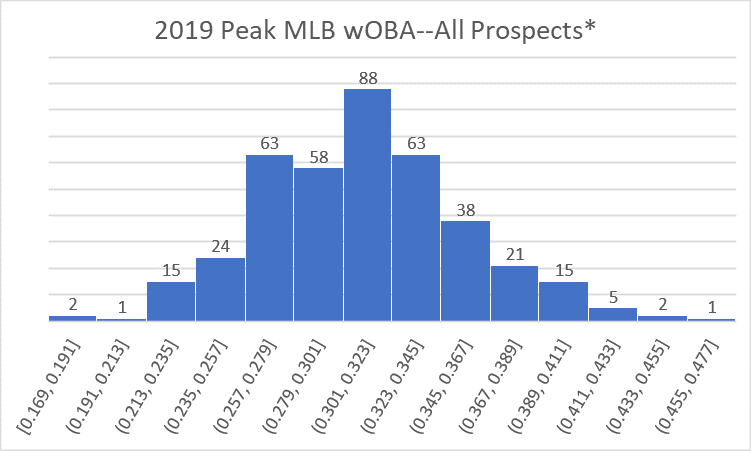 If you regress 50% toward league average, Waters’ minor league BABIP drops to a more reasonable but still excellent .371. His peak MLB wOBA drops from .399 to .359. A .371 BABIP gives Waters much-deserved credit for an excellent hit tool, but also a deserved penalty for excellent luck. I think this BABIP adjustment leads to a more reasonable approximation of his value—more a back-end top 30 hitting prospect than a back-end top 10 guy.

While Waters likely has the skills to sustain high BABIPs in the minors and majors, it’s instructive to consider what would happen to Waters’ wOBA if we assumed his high BABIPs were entirely luck-driven. If you assume his BABIP is purely luck and regress all the way to league average (.303 BABIP in the Double-A Southern League), Waters’ peak MLB wOBA drops further to .319—an average MLB hitter. You should not actually assume his BABIP is all luck–that would be dumb–but it’s an interesting Mccracken-ian thought experiment demonstrating the importance of BABIP.

Moving on from Waters, Brent Rooker’s peak MLB equivalent wOBA for his Triple-A performance drops from .353 to .330 with BABIP regressed 50% (from .417 to .370). Gavin Lux has miraculously sustained a .500+ BABIP in his first 130 plate appearances in the Pacific Coast League. Without adjustment, his peak MLB wOBA for 2019 is .427, making him one of the games’ best statistical prospects. Lux survives the BABIP adjustment too—with regressed BABIP, his peak MLB wOBA drops to .412, still quite elite. The same goes for Luis Robert: he’s been extraordinary in every way this year, and his peak wOBA (.444 unadjusted) also survives the BABIP-adjustment, dropping slightly to .417 (regressed 50%). One of this year’s biggest short-season breakouts, Kristian Robinson, sees his peak MLB wOBA drop from .427 (unadjusted) to a still elite .404 (regressed 50%)—further validation for his breakout.

Turning to BABIP underperformers, Jazz Chisholm gets a nice bump in peak MLB wOBA when luck-adjusting his .258 Double-A BABIP. He sees a .338 peak MLB wOBA go to .351 with a 50% regressed BABIP, and further to .363 with a league-average BABIP. It’s a similar story for Keibert Ruiz, whose peak MLB wOBA jumps from .322 to .338 (50% regressed BABIP) to .353 (league average BABIP)—still quite strong for a catching prospect. Kyle Tucker has had a down season compared to last year, but it doesn’t look quite as bad once his BABIP is normalized—his peak MLB wOBA goes from .336 to .363 with a league-average BABIP. Miguel Amaya has shown good plate discipline and power while being hurt by a .262 BABIP in the High-A Carolina League. His peak MLB wOBA rises from .339 to .365 with a league average BABIP—among the best performances in the minors for a catching prospect.

It’s clear that BABIP has a big impact on overall performance. Analysts should consider scouting reports on hit tool and past minor league performance to determine how much of a player’s BABIP is driven by skill rather than luck. A player like Waters checks both of these boxes, earning rave remarks for an elite hit tool, and never posting a BABIP below .360 at any level in his minor league career. Even so, it’s prudent to consider a large luck factor in abnormal BABIPs.

Anatomy of a Top 10 Performer: Mitchell and Kawhi