Welcome to The Dynasty Guru’s Triple Play! This is a series where three of the Dynasty Guru’s nerdier baseball writers – Adam Lawler, Patrick Magnus, and Keaton O. DeRocher- bring to you a succinct analysis of a pitcher, a hitter and a prospect from each organization. We’ll be running this regularly until we cover all 30 teams!

Each team will be covered in alphabetical order. This article we’re covering the Texas Rangers. And, while we here at The Dynasty Guru are primarily baseball obsessed, we’ll also be touching on some music we’ve enjoyed from each team’s home state. Enjoy, and leave us your question and comments below!

The Texas Rangers kept making deals to add international bonus pool cash in pursuit of Shohei Ohtani, but ultimately fell short of the Japanese superstar and were left with a bunch of cash and no high-priced signing. Enter Julio Pablo Martínez: the Rangers turned their attention to the toolsy Cuban outfielder and signed him for $2.8 million this past offseason.

JPM’s carrying tool might be his incredible speed, which he used to swipe 24 bags in 61 games in Cuba’s top professional league in 2016 (as a 20-year-old) and another 24 in 76 games in Independent League competition after defecting. TJPM is 6/10 on the basepaths through 25 games in the Rangers system (between Dominican Summer League and Short Season A-ball), showing that both his speed and his aggressiveness has so far been translating.

No One Trick Pablo

Just because his carrying tool may be his speed doesn’t mean that’s his only tool, however. JPM’s swing and mechanics at the plate project to seamlessly translate to the majors, and his track record in Cuba shows he has a knack for hitting for average and enough power to matter.

JPM uses his athletic frame and quick hands to make plantly of contact, and he should hit for a solid average in the .290-.300 range. His swing plane has some slight loft to it, generating plenty of gap power, and projects for around 15 homers per year.

If JPM signed after your first-year player draft, then this is a great opportunity to snag a guy that could fly under the radar of offseason signees/draftees. With what should be a short lead time to the majors, and a projection for 15 homers .290 and 30 steals, JPM has as good a shot as any to be a 5-category fantasy contributor, and with his approach at the plate and ability to draw walks he becomes even more of an asset in OBP leagues. A good comp for his value is Lorenzo Cain from the past few years. His floor is probably present-day Gregory Polanco and his ceiling is what we wanted Gregory Polanco to be.

I would look to target Julio Pablo Martinez early in first-year player drafts this offseason. However, there’s a good chance he’s gotten lost behind the crop of international signees and the June draft players, so feel out how well your league is paying attention. He’s going to be a great asset and will move quickly through the majors, so he’s a perfect piece for both rebuilding and competing rosters. Go forth and acquire!

Nomar Mazara, Not a Superstar

We are halfway through Nomar Mazara’s third year in the majors, and the young man is only twenty-three years old. In dynasty baseball, we dream of players being in the majors this early and performing consistently. That is a dream that Mazara has fulfilled, for the most part. In his rookie season, he made the adjustment from the Minors to the Majors look relatively easy, slashing .266/.320/.419 with 20 home runs.

Perhaps mistakenly, dynasty owners thought “If he’s making it look this easy his rookie year, imagine what he’ll grow into!” Similar to the way many parents look at their own children when they exceed skill or learning expectations prior to their peers. However, while early learning achievements are impressive and important, they are by no means an indicator of greater skills to come.

The Overvaluation of Nomar Mazara

Let’s get this out of the way first. Nomar Mazara is a super talented baseball player, who will remain a strong asset in dynasty formats (especially in OBP leagues). However, there is a theory amongst analysts that Nomar Mazara is going to turn into a home run mashing machine. While it’s certainly in the range of outcomes for the 23-year-old, there is a small problem. Nomar Mazara refuses to lift the ball.

The Rangers’ right fielder has hit the ball on the ground 49.5% of the time for his career and is currently doing so 55% of the time. That career-high ground-ball rate lines up with Nomar’s career-low launch angle of 5°.  Yet, here we are nearly at the All-Star Break and the Texas right fielder is on pace for a high in home-runs, ISO, and slugging. What gives?

There was a point earlier this year when Mazara Fever swept through the fantasy baseball community. Many owners rejoiced as their prized young outfielder looked to be blooming into the power hitter they dreamed of. That dream has slowly dissipated as the season has continued because Nomar Mazara hit ten of his fifteen home runs in one month. 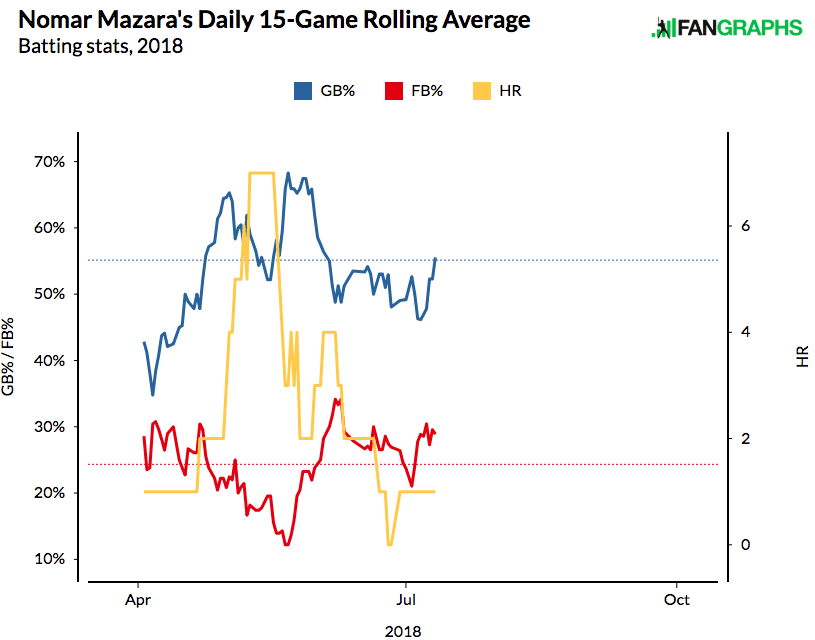 For the month of May, Mazara punished baseballs at a monstrous pace. Yet, Steamer and most projection systems conclude that he’ll only be able to double that month’s production for the remainder of the year. That might be because, unfortunately, we weren’t the only ones who took notice of this power breakout: so did opposing pitchers.

One thing that Nomar Mazara does extremely well is spray the ball around the ballpark. He may not lift the ball all that well, but he sure as hell can hit it to any part of the field. Except when he’s hitting home runs apparently. 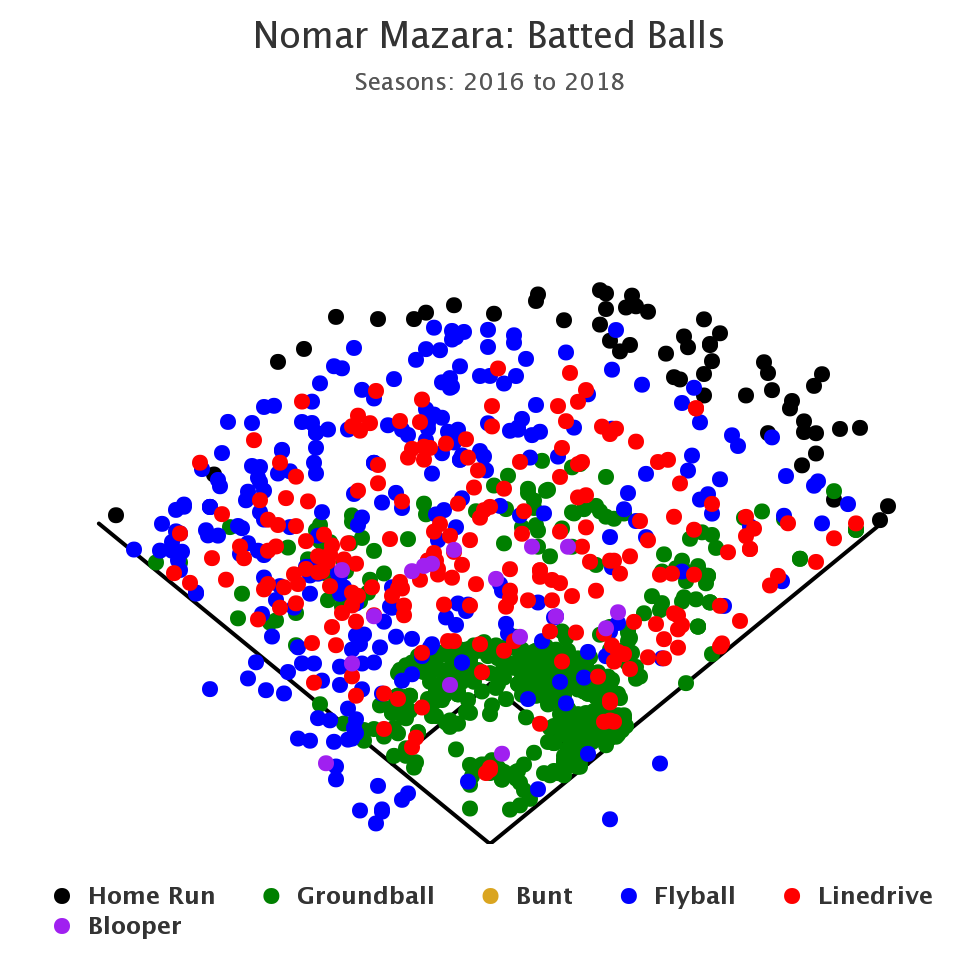 Nomar’s spray chart reveals he’s dependent on pulling the ball to hit it out of the park. That trend is even more exaggerated in 2018, as 14 of his 15 long balls have been hit to right field. After his torrential month of May, opposing pitchers decided it was best to keep the ball further away from him.

Keeping the ball away from Nomar means he’ll have a harder time pulling the ball, and with opposite power being limited with him this seems to be the right strategy to employ.

One final note on Mazara’s power is that it’s struggled against left-handed pitchers. So far in his first few years in the majors, he has only managed to hit 8 of his 55 career home runs off of lefties. Mazara has hit six such homers this season, but it seems like a fluke since he has only managed four doubles in 120 plate appearances in 2018.

Nomar Mazara continues to be a rock in major league baseball. He is an extremely talented ballplayer who is successful due to the sheer force of his bat (90 MPH exit velocity) and his inability to discriminate to which part of the park he hits the ball. Teams have been unable to successfully shift on the right fielder, and this year he actually owns a higher wOBA when the shift is implemented than when it hasn’t.

At only 23 years old, this baby outfielder will continue to be a reliable asset for a very long time. I’d expect him to remain a .270 hitter, .330 OBP, with 20-25 home runs for the next decade. That’s a damn good player, but if you’re waiting for Mazara to take the next step into superstardom then you might be disappointed. I would suggest shopping Mazara and see if any believers will pay superstar price.

Oh look, it’s time to write another Triple Play.  Who do we have on the schedule…Texas Rangers. OK. They aren’t that bad, right? Let’s take a look.

He was OK with KC last year. Free agent signing this year with a little buzz?

So we’re left with the 45-year-old Patron Saint of Beer League Softball, Bartolo Colon. Also, Cole Hamels who before this is published will probably be traded. Also, we’re a dynasty baseball site. So…

What Is An Austin Bibens-Dirkx?

It gets worse from there. Including the bullpen. And no, Keone Kela is not very good. Don’t @ me.

The Lone Star State of Pitching

I don’t know what Keaton wrote about the prospect. Maybe he found a pitcher that’s worth looking into.  Ariel Jurado? Maybe. But to put it in perspective, nothing good is going in Rangers pitching right now. They are tied for 25th in the MLB for home runs allowed (120), 24th in ERA (4.39), 26th in FIP (4.52), and 28th in DRA (6.01). From a pWARP perspective, Texas is only better than Kansas City and the White Sox of Chicago.   That means Miami, Baltimore, and Cincinnati have better batteries than Texas.

The Dynasty Guru's All Second-Half Team