Welcome to The Dynasty Guru’s Triple Play! This is a brand-new series where three very cool dynasty baseball nerds- Adam Lawler, Patrick Magnus, and Keaton O. DeRocher- bring to you a succinct analysis of a pitcher, a hitter and a prospect from each organization. We’ll be running this regularly leading up to and through Opening Day!

Each team will be covered in alphabetical order. This article we’re covering the Miami Marlins. And, while we here at The Dynasty Guru are primarily baseball obsessed, we’ll also be touching on some music we’ve enjoyed from each team’s home state. Enjoy, and leave us your question and comments below!

There was probably no worse draw in our entire Triple Play series than “pitcher for the Marlins.” It says something about the state of the entire pitching staff when the most interesting pitcher on the roster is the set-up man, but here we are. If you were jonesing for some analysis on the back end of the Marlins bullpen, well then look no further! I’m here to tell you why Barraclough should be getting save opportunities over Brad Ziegler.

This Bear Uses His Claws

The headline is Barraclough has some rather filthy stuff. Exhibit A: 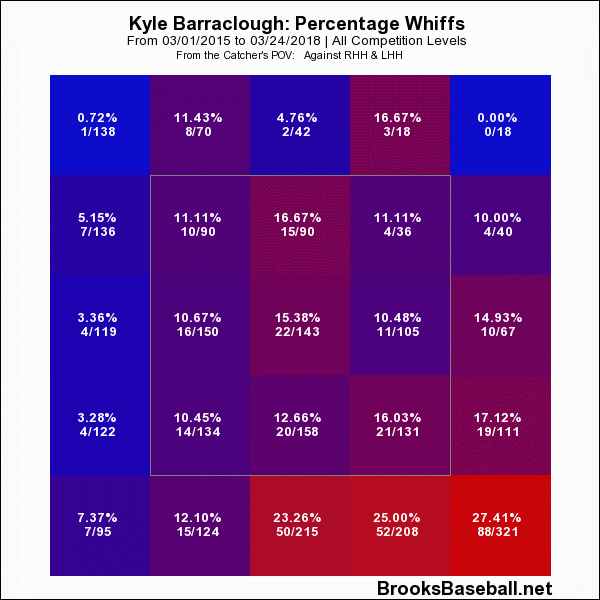 Barraclough generates a ton of swing-and-miss down in the zone and to his left side. He averages 96 miles per hour on his fastball and pairs it well with a devastating slider that sits at 82. Across his 163 major league innings, Barraclough has compiled an average strikeout rate of 12.09 per 9 innings, and he even ramped that up to 14 per 9 in 2016.

The glaring weakness of Barraclough is his heroic ability to walk batters. It’s very bad. I would liken it to him playing darts blindfolded, but that’s unfair to blindfolded darts. Barraclough trying to find the strike zone is the physical embodiment of the phrase “looking for a needle in a haystack.” You would think he was exclusively pitching to senior citizens and children under 2 with the number of free passes he hands out. In his three seasons in the majors, Barraclough has posted walks per 9 of 6.66, 5.45, and 5.15. I guess the silver lining here is that season over season, it has declined ever so slightly.

However, Barraclough does an extremely good job of working around all his walks. He keeps the balls he can control low in the zone, generating a 45.1% ground ball rate. That really limits major damage on the scoreboard with a 6% HR/FB percentage. Those numbers, paired with his high strikeout ability, lead to an above average strand rate of 76.9 %. And even when Barraclough gave up batted balls, the results were fairly positive. 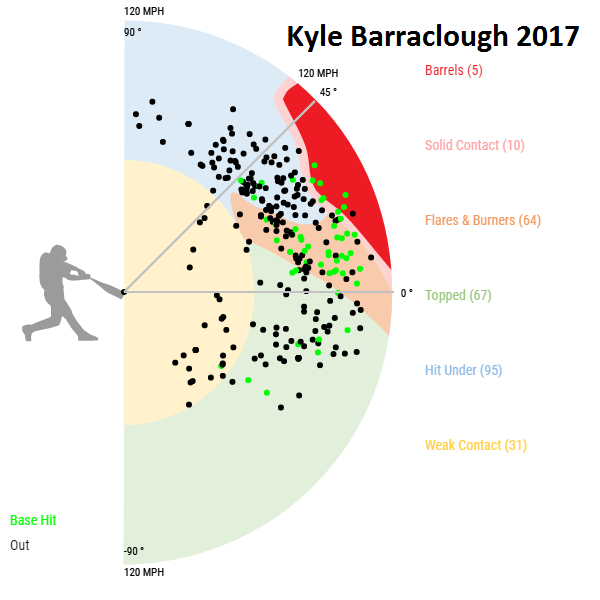 Boiled down to a nutgraph, Barraclough strikes out a ton of batters, limits both contact and poor outcomes, and has an incredible ability to work around baserunners, but has a really bad habit of creating those baserunners himself via lots and lots of walks. All in all, there may not be a better reason to let Barraclough loose on save opportunities than the Marlins literally have nothing to lose by giving him a shot.

Sandy Alcantara is a pitching scout’s wet dream [Ed. Note- gross]. The prized piece in the Marcell Ozuna deal – during the Marlins fire sale of 2017, sponsored by the Miami chapter of the American Masochist Society – that was publicly derided as another fleecing of a once proud functioning interesting baseball team.  However, in a dynasty format, it would be foolish to jump to such conclusions. Then again, he is an arm and it’s hard to invest in volatile assets.

A four-pitch mix from the free-flying, slender, 6-foot-4 righty has been pegged as a future back of the pen stud.  I think that might be a bit short-sighted. The slider, fastball, sinker, changeup combo grades out as plus across the board.

If you want to see Alcantara at the peak of his powers, look no further than his Fall Stars series where he ate the soul of this poor fellow with his slider:

Not impressed? How about this fastball that typically sits in the high 90s, can exceed the century mark, and is generally targeted to sit in on the hands of a right-handed batter? 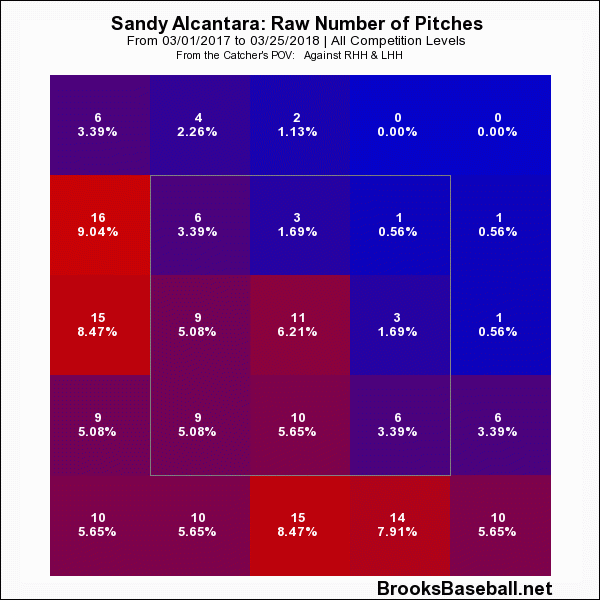 Yeah. I love the idea of a batter saddling up to turn on a 101 MPH fastball coming on the hands while praying the slider doesn’t come in 15 MPH less and tail away.  Good luck with that.

The bugaboo for Alcantara has been the free pass.  A young, live arm with electric stuff having difficulty harnessing his raw stuff? You don’t say!? Well, it’s true. The journey through the farm and his first taste of the bigs has highlighted as much too.

The book was out on Alcantara before he ever came to the show: wait for him to throw the ball, sit there, let him walk you.  You can have all the stuff in the world, but until you learn how to hone your craft, skilled professionals are going to wait you out.

Personally, for as rough as things look with the free pass, there’s a lot to like about Alcantara’s profile.  As you can’t teach height in basketball, you can’t teach triple-digit heat.  Alcantara’s ceiling is last year’s Luis Castillo. His floor is Felipe Rivero.  That’s not a bad place to be.  You could invest in worse arms in dynasty formats (like Amir Garrett).  As someone who does not have a share of Alcantara, I’m kicking the tires before he’s called up

I have a thing for Sally Fields.  Whatever. If you don’t, you’re the weird one.  80’s Gloria Estefan gives me the same kinda vibe.  Just… something about her…

This 23-year-old outfielder has been traded twice since being signed as the 29th pick overall in 2012 by the Texas Rangers. While each year his team has changed, he has remained the top prospect in each team’s system. “Athletic” and “Toolsy” are phrases tossed around with Brinson. He’s 6.3, 195 lbs, and may have the longest legs in the history of professional baseball. 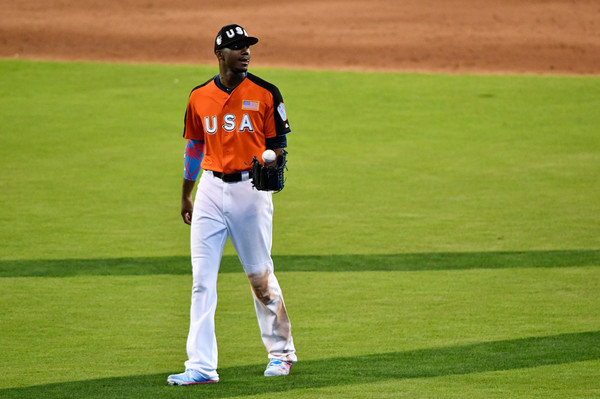 He posses 60-grade speed and 60-grade power. Those are the big tools that scouts seem to agree on. The biggest question–whether or not Brinson utilizes these tools and becomes a superstar–hinges on his hit tool.

Sipping on Brin and Juice

I’ve omitted the 2016 stat line because Brinson dislocated his pinky, missed part of the season, was sent down to double-A with the Rangers, and then started triple-A with the Brewers. The injury is important to note in order to understand his development, but I feel the stats will distort the overall picture of the player. I’ll dig a little more into Brinson’s injury history in a bit.

Throughout his minor league career, the Brinsonator has had a real problem with striking out. While he has produced decent batting averages throughout many levels, Brinson won’t be successful at the major league level with his current swing-and-miss tendencies. He did manage to get things under control in 2015 and 2017, so there’s some hope that he can hit for average in the Majors.

His calling card, however, is his power-and-speed combo. I’m still doubtful about his ability to hit for average, but I think he can produce enough of a walk-rate to command the zone and get his pitch. He’s made swing adjustments in the past to lower his strikeout rate, but he really struggles against breaking balls- a trend that will most likely continue until he’s exposed to more major league pitching.

Brin and Bare it!

As I mentioned earlier, another concern for this budding young top prospect is his inability to stay on the field (boy am I sick of writing that sentence for these articles). Take a look at the amount of time Brinson has missed due to injury.

Health is a skill, and Brinson may not have the ability to play centerfield on an everyday basis. I think he would be better off in a corner outfield position, as he does indeed have a strong enough arm for the corners. Here’s the only example I could find of his throwing arm in action. Here he throws out Mondesi, who just so happens to be one of the fastest players in the minors.

Along with his arm, Brinson does have the defensive skills needed to stick at centerfield. He provided positive defensive value during his brief tenure with the Brewers last year and has continued to make some damn good plays this spring.

When we discussed the trade between the Marlins and Brewers on the podcast my co-analyst/author, Keaton O. DeRocher, spoke about the fact that Brinson has been moved twice now. That raised one of Keaton’s handsome eyebrows because it generally implies that an MLB team might know something we don’t. If I hadn’t researched Brinson so deeply, I’d certainly be inclined to agree. However, I’ve got another theory as to why Brinson was moved. Something Dynasty owners are keenly aware of: contention cycle.

I believe the injuries have had an impact on this young outfielder’s development, and that it’s going to take several years before we see him reach his potential. The Rangers moved Brinson when they were in contention to acquire Jonathan Lecroy, and the Brewers will be competing for a Wild Card spot this year. If there’s any team that has a large chunk of time to kill before their next contention cycle, it’s the Marlins. A team trying to “cut payroll” and completely rebuild can afford to take a chance on a derailed prospect with superstar potential. If your dynasty team is in a similar situation to Marlins, you can afford to do the same.

You Brinson, You Lose Some

I’d expect the price on Brinson to be rather high in most leagues at the moment, due to a strong Spring performance and landing the starting job in centerfield. There should be plenty of buying opportunities throughout this season, however. The Brinsonator hasn’t shown a vast improvement in his approach at the plate this spring, with three walks and 17 strikeouts. So 2018 should be a season of highs and lows for him. My recommendation is to buy during those lows.

Brinson has all the physical tools needed to succeed at the Major League level. Listening to him talk, one can also tell that he is a rather bright dude, and if he can manage to stay on the field I fully expect him to make the necessary adjustments to be a #2 outfielder on your dynasty team. I’ll be rooting for him, and you should be too. He’s going to be fun to watch.

How did no one else select Pitbull?

Join The Dynasty Guru Facebook group for tons of posts, debates, and many replies from writers here at TDG!