Welcome to The Dynasty Guru’s Triple Play! This is a brand-new series where three very cool dynasty baseball nerds- Adam Lawler, Patrick Magnus, and Keaton O. DeRocher- bring to you a succinct analysis of a pitcher, a hitter and a prospect from each organization. We’ll be running this regularly until we cover all 30 teams!

Each team will be covered in alphabetical order. This article we’re covering the Philadelphia Phillies. And, while we here at The Dynasty Guru are primarily baseball obsessed, we’ll also be touching on some music we’ve enjoyed from each team’s home state. Enjoy, and leave us your question and comments below!

Don’t forget to write a review for The Dynasty Guru Podcast for a chance to win your own personalized Triple Play. Review the pod, send a screen shot to TheDynastyGuru@gmail.com, and you’ll enter to win a Triple Play written by Adam, Keaton, and Patrick for three players of your choice!

I’ve done a few of these analyses now on guys that have changed their approaches and how it has affected their outcomes and Franco is another that I wanted to analyze. Subtle changes in mechanics or approach fascinate me and I love studying their results because there is no one-change-fix in baseball. For example, two of the previous players I examined made the exact opposite changes in their mechanics because their skill sets were vastly different (Javier Baez and Chris Taylor), yet the results were the same: they produced more power and average results. Maikel Franco is another example of this. He made a unique change to his mechanics this offseason and it’s paying off.

The Not So Subtle Difference

Let’s take a look at Franco’s stance from last year:

Previously Franco had been using an open stance that broke his swing up into two different portions with his step and follow-through. That isn’t ideal… once you start your motion, the kinetic energy of your body starts to build and should reach its peak when the ball hits the bat, thus transferring energy to the ball and (ideally) sending it far. With his step, Franco was starting, slowing his body down, and then starting it again; as a result, he lost some of that energy and didn’t drive the ball as much. Now let’s look at the change:

Franco’s stance is now closed completely, and instead of two parts to the swing with his lower body, his lower and upper-half work in tandem, producing a much smoother mechanical swing process. His hands, back foot, elbow, and bat are all in the same spot in both gifs, keeping his swing plane the same. That’s a good thing because his path to the point of contact with the ball was familiar and comfortable, so he wasn’t learning an entirely new process.

Franco has always been kind of a peculiar case… his strikeout rate isn’t all that high for a power guy. At a career 16.2%, that’s actually pretty darn good. His walk rate isn’t as high as you would like to see, but it’s not at any number that will hurt you at a 6.5%. Over the previous three seasons, he has seen his average consistently dip, reaching a career low .230 last season. With a career-low .234 BABIP, we can attribute some of that to bad luck, but the down season certainly drove Franco’s stock down. It’s prime time to buy low before it’s too late because the swing changes make his improved performance seem legit.

Medina is the second highest rated prospect name in the Phillies system, a grade behind Sixto Sanchez and a grade ahead of Seranthony Dominguez. He has a tantalizing skillset with all the tools and physical makeup I look for when falling in love with an arm. He’s also, well, super fringy.

The 21-year-old, 6’1” righty seems underwhelming when reviewing the stat line. After being drafted as a 17-year-old out of the Dominican Republic, scouts had been eyeing him through his trek from the Gulf league, through the New York Penn League, and onto the South Atlantic League (SALL) last year.  He’s been young at every stop — batters were often two years his senior — and the Phillies organization has reportedly placed emphasis on command/control over his stuff.

It’s a fun repertoire. He’s fun. It’s definitely a mold of a pitcher you can dream on. Especially when end-of-the-year reports state he made clear and marked progress.

Cracks in The Mold

Now, to be fair, we can caveat this by saying he’s still more than two years younger than most people currently in High-A.  However, aces gon’ ace and he ain’t. The venerable Eric Logenhagen indicated his command went from 30 to 40 between 2017 and 2018.  But what if he regressed? What if his stuff was just too good to lay off for A-ball hitters, but when he came to a higher class of batters they were ready for it?  What if I’m also wildly speculating over 14.2 innings pitched?

I think it’s worth monitoring.  Let’s say he continues to struggle, walking five batters per nine over the next four starts/40 innings. I would encourage you to get out ahead of the midseason reports and consider dealing Medina. Dangling him out there as a sweetener in a deal to add current talent in a push for playoff positioning is the type of savvy move a championship owner makes. It’s also the type of a bait a sucker like me will take in hopes that Medina hones his incredible talent and becomes the Adonis to my Sixto.

I’m just gonna say it. Meek Mill sucks. What happened to him is awful. It’s criminal. I’m glad he’s out…just go do something else man because the rap game ain’t for you. Instead of wasting your energy on some low rate Nas, check out Jedi Mind Tricks. They are dope.

What better time to read about this young right-hander than after he’s been shelled by one of the most exciting lineups in baseball! Vincent Velasquez is not coming off his best start, but those of you who have owned him know this is par for the course. VV has been, in a word, inconsistent throughout his young career.

Swing and a Miss!

A good fastball is important, and Velasquez has one. He throws it around 95MPH on a consistent basis and generates above-average swings and misses. Combine this with his devastating changeup, and you’ve got a recipe for a lot of Ks. These two offerings are what make Velasquez such an intriguing player.

So his swing and miss game comes from his fastball and change-up, but our man here has two other pitches in his repertoire. His slider is a pitch that generates the majority of his ground balls. It’s actually one of his only pitches that doesn’t give up an above average amount of fly balls.

The big fly ball pitch would be VV’s curveball. The pitch can have some very sharp break.

While the curve makes Justin Bour look foolish in the above gif, Velasquez generates very few swings and misses on the curve. Instead of delivering more swings and misses, the curve produces a large number of fly balls, and that’s the problem.

Too Many Hard Hit Fly Balls

Too many fly balls. That’s really what it comes down to with VV. Take a look at his results thus far courtesy of Baseball Savant.

Too many “Flares & Burners,” not enough weak contact. Batters are putting up above average exit velocities on those fly balls too, and that leads to earned runs. Defensively the Phillies are not doing a ton to help out their pitcher either, as they rank 14th in both Outs Above Average and Catch Probability. 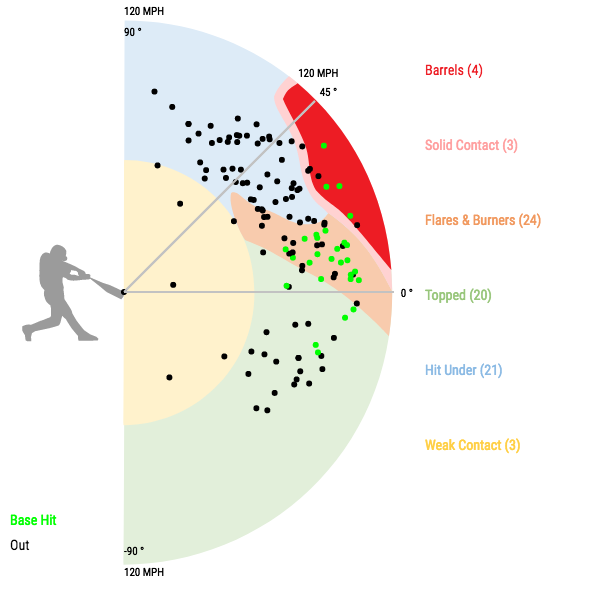 The season remains young, but this isn’t exactly a new trend for the 25-year-old.

Throughout his short Major League career, Velasquez has had trouble keeping the ball on the ground. He only generated worm-burners 40% in his injury-shortened 2017 and consistently underperforming more advanced metrics such as DRA, FIP, xFIP, and SIERA.

Who Are You, Vince Velasquez?

Last season came to an early end for VV after having surgery on his middle finger. Sort of an odd injury that was apparently related to an issue in his right armpit, which was restricting blood flow. His recovery went smoothly and doesn’t appear to be something contributing to his performance this year.

Instead, his inconsistencies are that of a young pitcher who hasn’t found the right recipe with his stuff to generate sustainable success. It’s easy to look at his 4.50 ERA and most recent two-inning disaster and dismiss Velasquez… there are some other indicators that suggest better days are ahead.

A Cheap Pitcher with Plenty of Strikeouts

Currently, the right-hander is carrying a .347 BABIP and a LOB% of 61%. I’m expecting the BABIP to fall, the LOB% to go up, and a slight uptick in ground balls as well. That will put his overall stats closer in line with his DRA of 3.12.

I expect his ERA to be closer to four than three, but he’ll be carrying a TON of strikeouts as well. I’m buying Velasquez in any league I can. He shouldn’t cost much, and there’s an SP3 upside here. Have patience as Velasquez has only proven he’s consistently inconsistent so far in his career, but there’s too much potential here to ignore.

Adam is wrong. Meek Mill does not suck. 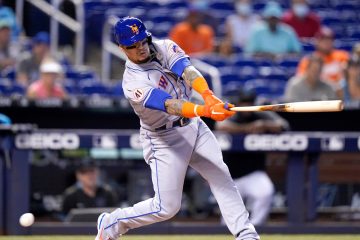