As The Hold Steady so aptly state in Slapped Actress: “Don’t mention Tampa, they’ll just know all the rest”

Yawn. Being a Rays fan means having to catch crap from most of the baseball world. It gets old. That being said, when the team is 3-11 it’s hard to mount an effective comeback aside from “yeah well It’s probably snowing where you are and it’s not here.” Chris Archer used to be a bright spot in being a Rays fan, but his start to the season may have some second-guessing that. Well, I’m here to tell you not to worry, because there’s nothing to indicate a serious change or cause for concern.

There’s been plenty of digital ink spilled on Archer, but to sum him up: 29 years old, k/9 of over 10 since 2015, ERA always higher than his FIP and xFIP. It’s been particularly bad in 2018, though- 7.84 ERA through four starts while his xFIP is 3.8.  So let’s take a deeper-ish look at some factors that may be affecting that ERA. Granted, we’re only talking about 20 innings, but we need to try and figure something out so we know whether to buy or sell.

Ok, so strikeouts per nine are down, walks and homers per nine are up. Groundball rate is a bit down and home run to fly ball is a bit up. His BABIP is crazy high and his strand rate is crazy low, so early returns indicate that he’s a little unlucky (his career BABIP is .297, and career strandrate is 72.1%). BABIP and strandrate more inline with his career numbers will correlate to a lower ERA.

Next step- let’s see if we can get any information from his pitch usage and effectiveness.

No big revelations here, especially given the small sample size we’re working with. His usage, velocity, and effectiveness for the fastball, changeup, and slider (respectively) aren’t indicating anything concerning.

Let’s take a look at some charts to see if there’s anything else we’re missing, all courtesy of Brooks Baseball. 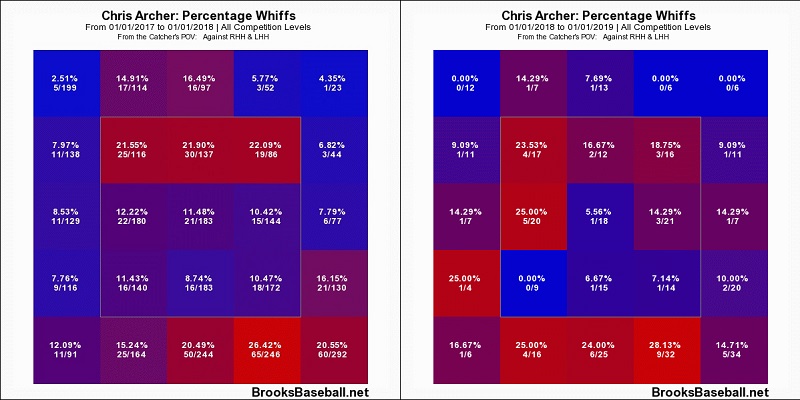 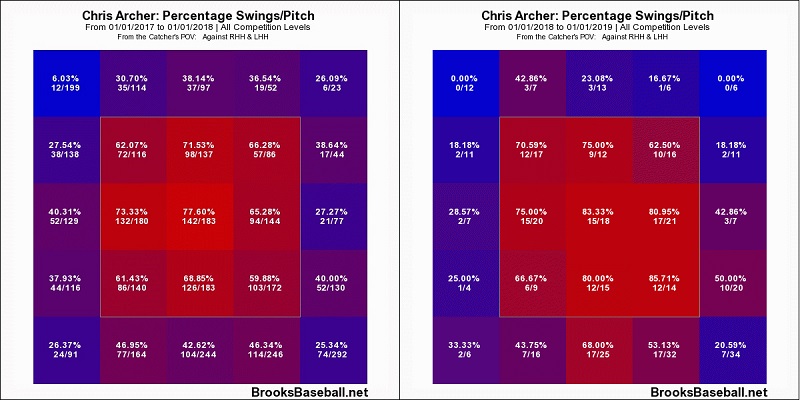 So there’s no change from 2017 to 2018, but maybe there’s something in lefties v. righties this year? (h/t to Adam Lawler for suggesting I take a look) 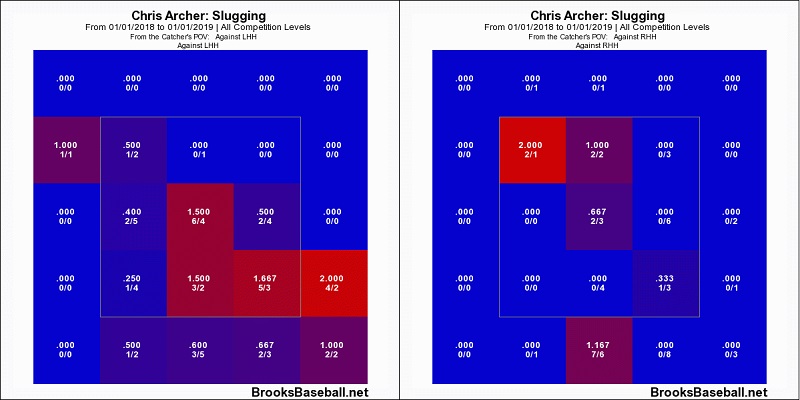 While the small 2018 sample size can’t really tell us anything to begin with, I wanted to take a look for anything that could be concerning if it continued into a more substantial sample size. Yes, he’s getting hit by lefties, but there’s no big change in anything else that would explain why. Armed with this knowledge, I’m trying to buy Archer everywhere I don’t have him, hoping that his current owner is scared of his slow start. And in the leagues I’ve already got him, I’m holding steady.