Few fantasy prospects have captivated my imagination in recent memory like Rangers farmhand Ryan Cordell. Granted, I may be the only one, as he’s owned in less than one percent of CBS Leagues. Somebody out there has to own him besides me, so I know it’s not quite to the level of this, but needless to say, he’s available in your league. Cordell checks off a lot of the boxes that you look for in a fantasy prospect, as he’s an athletic 6’4″, 205 lbs, he hits for average (.294 career), has big time power (led all California high schoolers with 14 homers as a senior and hit 13 in 89 games in 2014), steals bases (21 in 2014), and is in an organization with a big league park conducive to offense. So why the hell is he still in Single-A ball, and repeating High-A for that matter, after putting up a .914 OPS in 2014?

There are multiple reasons for this, as Cordell slipped to the 11th round in the 2013 draft after posting a pedestrian .261/.310/.391 line his junior season at Liberty (VA) University. The Rangers obviously saw the physical tools that Cordell possesses, but essentially viewed him as a project right from the start and reworked his swing to try and generate some of the power that he showed in high school. He struggled in his first taste of pro ball to the tune of a .680 OPS at Spokane of the Northwest League in his draft year of 2013, but did steal 19 bases in 23 attempts. In 2014, Cordell was assigned to Low-A Hickory where he mashed (like many do at L.P. Frans Stadium) to the tune of a .891 OPS, in which he battled injuries that only enabled him to get 310 PA before being promoted to High-A Myrtle Beach to finish out the year, getting an additional 70 PA and posting an 1.017 OPS. Cordell was not a Hickory creation, tallying a .847 road OPS, and his .318 overall batting average led all Rangers minor leaguers. After having Cordell almost exclusively play right field after being drafted to enable him to focus on his hitting, the Rangers deployed Cordell at all three outfield positions in 2014, appearing in left for 33 games, center for 24 games, and 15 in right, and his defensive overall was viewed as an asset. Unlike most Rangers prospects, Cordell doesn’t strike out a ton, checking in with a respectable 17.9% strikeout rate in 2014 and makes loud contact frequently:

After taking a step forward in 2014, many viewed Cordell as a lock to join Nomar Mazara and Joey Gallo, starting the year off in Double-A Frisco. After all, he was turning 23 in March. Then the Rangers shocked nearly everybody by doing this in Spring Training:

Heard back from Rangers on Ryan Cordell. Shortstop is the plan going forward, instructs experiment continued in ST & is now primary position

Cordell played zero shortstop in college, and it speaks to his athleticism that the Rangers would even think to attempt such a transition. Even he was caught off guard by the Rangers new plans. Cordell spent all of spring learning the infield, and the Rangers sent him back to High-A ball to work as a SS, this time to the bandbox known as High Desert of the California League. After dealing Luis Sardinas to the Brewers this winter and seeing a player who gets hurt while sleeping (Jurickson Profar) lose another year to injury, it makes sense from an organizational depth standpoint that the Rangers would look to get a feel for Cordell’s ability to handle shortstop, at the very least on a part-time basis. So far in 2015, Cordell has played 14 of his 20 games at shortstop, appearing in four in center field, one in left field and appearing as the designated hitter in the other. Cordell has received mixed reports on his range and footwork so far at short, making seven errors in the 14 games he has appeared in to this point. The new position has not affected Cordell’s bat one bit, as he’s doing what a 23-year old in the California League should be doing, crushing the ball for a .341/.368/.593 (.962 OPS) line in the first 20 games.

It’s usually not recommended that a 23-year old in High-A be a prospect to watch, but for the reasons above I believe Cordell is a prospect worth keeping an eye on, whether the Rangers keep playing him at shortstop, or choose to accelerate his path to the big leagues by playing him in the outfield.  I would have him ranked in the 125-150 range as a fantasy prospect, and now that he’s playing multiple premium positions, he’s a certainly a guy worth tracking in deeper leagues. As I wrote in January, Cordell has a chance to be a top five hitting prospect in a hitting-rich Rangers system by the end of the year should be continue to mash, and could be aggressively promoted due to his age. 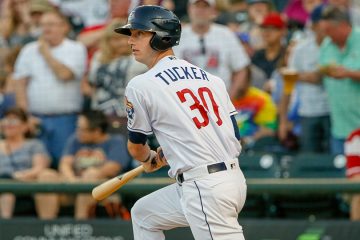