It is reasonable to argue that these players got unlucky and were deserving of more home runs given their fly ball distances and exit velocities. In some cases, these additional home runs can make a huge impact on their triple-slash (BA/OBP/SLG). The leaderboard below shows xHR/FB for every full season minor leaguer, as well as their updated triple-slash incorporating the additional home runs. Note that I used the descriptive measure of xHR/FB rate for the table below, as my goal was to more accurately capture deserved 2019 home runs given underlying power metrics rather than predict 2020 home runs. For player’s without exit velocity data, their xHR/FB rate is based solely on their average fly ball distance. 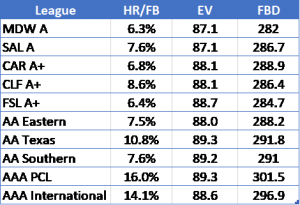