How to best make sense of the recent proliferation of information on minor league hitters, specifically power metrics? This is a question I’ve been struggling with in the last few weeks/months (does anyone keep track of time anymore?) regarding minor league fly ball distance, exit velocity, and exit velocity on fly balls. Find some of my recent explorations on the subject here and here. I can now say I’ve found an answer I am sort of at peace with: the bastard son of xwOBA, or, xwOBA-lite for minor leaguers. Jump to the bottom for xwOBA-lites for the great majority of full season minor leaguers.

Having introduced the r’aison d’etre of this piece, perhaps stirring excitement in the reader, or perhaps a sense of dread, I shall now do my best critique of the bastard son of xwOBA. Why is it called the bastard son, after all, and not the beloved son? (Besides my desire to not upset the MLBAM statistics department by tarnishing their vastly superior xwOBA metric by association).

At the MLB level, xwOBA captures a hitter’s expected performance based on the exit velocity and launch angle of each of their individual batted balls. Hit a screaming 95 MPH line drive right at the shortstop? Instead of a boring out, xwOBA credits you for the outcome that event typically produces. The expected outcome of a similar batted ball, in this case a screaming line drive, is quite good.

At the minor league level, on the other hand, there is no publicly available exit velocity or launch angle data on each batted ball. There is hardly even average exit velocity data for each player, though excitingly, FanGraphs and Baseball America have started reporting it for the top 100-ish prospects. Plus, Prospects Live reports average fly ball distance on virtually all prospects. Rotowire also reports hard hit rate for prospects. Each of these pieces shows a single aggregate measure for each player rather than individual batted ball data. Eventually, and probably soon, there will be high quality minor league data similar to what is available at the MLB-level, relegating this piece happily to the archives of history–like the Declaration of Independence, or Weezer’s Raditude. In the meantime though, the explosion of recent metrics is at least much nicer than nothing.

xwOBA-lite (xwOBA-L, or if you prefer, heretical xwOBA), incorporates average exit velocity and average fly ball distance (where each is available) into a model of expected offensive performance for minor leaguers. It also captures average exit velocity on fly balls, derived from average fly ball distance and a hitter’s batted ball mix, a high quality proxy for launch angle. If you have launch angle and average fly ball distance, you can estimate average exit velocity on fly balls with reasonably good accuracy (an identical model built at the MLB level, where average exit velocity for flies is known, explains 80% of its variance). xwOBA-lite reports expected offensive performance given each of these power measures, plus a few more attributes discussed below. It should not be confused with xwOBA, or its rightful minor league heiress, but it should be interesting enough in its own right, an appetizer to hold us over until minor league data improves further. For comparison, xwOBA-lite has a .77 correlation with wOBA for players with minimum 200 plate appearances in 2019 across the 10 full season leagues (n=1335). MLB xwOBA and wOBA are correlated at .86 in 2019 (minimum 200 plate appearances). It’s a good sign that xwOBA-lite’s descriptive ability isn’t that far behind MLB’s. However, while MLB xwOBA is quite predictive (e.g. I’ve found 2018 xwOBA was more important than 2018 wOBA for predicting 2019 wOBA),  it remains to be seen how predictive xwOBA-lite is. In any case, the fact that it primarily captures quickly-stabilizing metrics, more repeatable skills, suggests it should in theory offer solid predictive value. 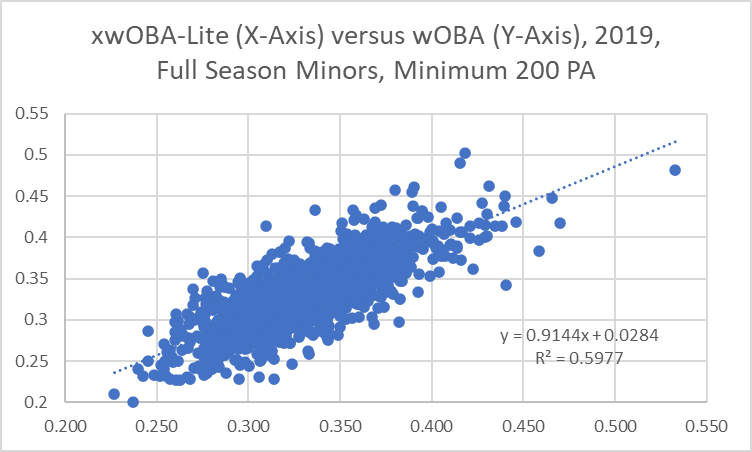 Now on to the major weaknesses of xwOBA-lite. Relative to MLB data, the lack of individual batted ball event data for minor leaguers is a substantial weakness. If a player has a low average exit velocity but a lot of hard-hit balls (and few medium hit balls), he may truly be better than a player with a higher average exit velocity but fewer hard-hit balls at the top of the distributions (i.e. barrels). 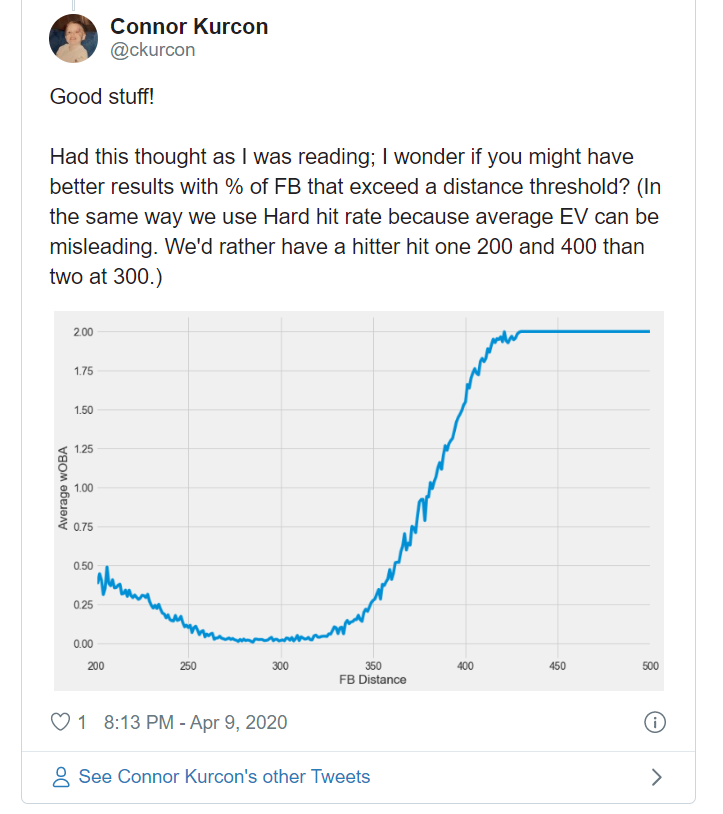 Next is a graphic of my composite xHR/FB measure used in xwOBA-lite for all 2019 full-season minor leaguers with at least 200 plate appearances. I modeled HR/FB rate separately as a quadratic function of each of average exit velocity, average fly ball distance, and average exit velocity on fly balls. I then had three different xHR/FB measures, one for each metric. After standardizing the variables, I took a weighted average of each (50% for average exit velocity, and then 25% each for the other two metrics, or 50% each when exit velocity wasn’t available, as was usually the case), turning them into a single composite xHR/FB rate. The relationship between this composite metric (after the quadratic transformation) and HR/FB rate is what is depicted below (R^2 is 70%). Each of the power measures has similar year-over-year reliability, in the .7 to .8 range at the MLB level. Average fly ball distance and average fly ball exit velocity have similar year-over-year reliability at the minor league level too, around a .7 correlation for each. 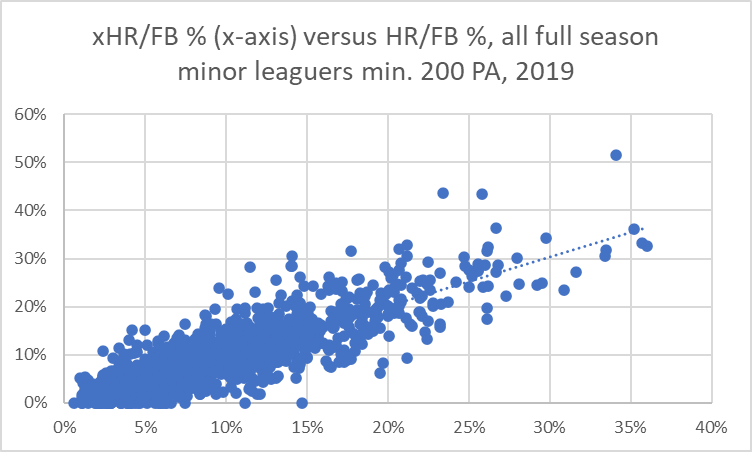 The next weakness of xwOBA-lite is, to me, the most annoying one: average fly ball distance and average exit velocity are not, as reported, adjusted for league difficulty (e.g. Double-A is harder than High-A)–though they are adjusted for league environment (the High-A California League is a more hitter-friendly environment than the Double-A Eastern League). Both are only available as one number for each player, regardless of whether they have played across multiple levels in 2019. This means that a 10% above league average exit velocity in High-A is valued as highly as a 10% above league average exit velocity in Double-A, even though the latter is obviously more impressive as it came against harder competition. Your 110 MPH day camp softball league home run in 2010 was impressive relative to the competition, sure, but not relative to Hunter Bishop’s 110 MPH smash in the minors this year.

What is the consequence of this bias? Players who played across multiple levels in 2019 have a slightly too high xwOBA-lite at the harder level and a slightly too low xwOBA-lite at the easier level. However, these biases cancel out mathematically; an overrated xwOBA-lite at a harder level is precisely canceled out by the underrated xwOBA-lite at the easier level. I was able to prove this to myself on a napkin over breakfast by plugging in some numbers; if this doesn’t convince the reader I’m not sure what else could. Further, the biases are relatively small, as most players don’t jump more than one level in a given season. In the future, it may be worthwhile to convert xwOBA-lite to the same MLB baseline to remove this bias as I did for my peak wOBA projections for prospects. I have held off for now both in the interest of time and because I’ve found people like to consider minor league statistics separately for each league rather than adjusting them all to the same MLB baseline. This is probably because most of us have developed an intuitive feel about how good a certain triple-slash is in a certain league.

The next weakness: xwOBA-lite is only built off of one year of data, as 2019 is the first year both metrics were available for many players. This weakness is also a strength, however, like the interviewee who claims to the prospective employer that their greatest weakness is “caring too much.” The relative strength of each league may change somewhat each year; limiting the model building process to one year of data escapes this issue.

Last is an issue for xwOBA in general: it does not capture every relevant skill and so it may contain small biases against certain players, e.g. pulled-fly tendency. To try to keep things more aligned with MLB xwOBA, I have not captured pull-tendency. Not that pulled-fly data is even available at the MILB-level, but I’m also not sure yet how to hypothetically incorporate it without over-incorporating it and making the metric less predictive. In any case, I’ve found this bias is small.

Now on to the advantages: while the heretical xwOBA-lite is no replacement for existing minor league statistics, it answers an interesting hypothetical: “what is the expected performance for each player conditional on rapidly reliable power measures, exit velocity (in general and for fly balls) and fly ball distance, as well as other rapidly reliable measures, strikeouts, walks, batted ball type, and speed?”

One can imagine, if sufficiently bored, that they live in an alternate universe where only certain information is available: strikeouts and walks (like in the MLB, xwOBA-lite takes these quick-to-stabilize metrics as a given), speed score, batted ball type distribution (fly balls, infield flys, grounders, liners), average fly ball distance, average exit velocity, and derived average exit velocity on fly balls. Perhaps Rob Manfred accidentally misplaced the home run, singles, doubles, and triples data in this universe–you never know.

xwOBA-lite provides estimates for singles, doubles, triples, and home runs based on alternative, reliable, quickly stabilizing sources of information that capture the same skills that singles, doubles, triples, and homers capture. xwOBA-lite also partially correct for park-effects, e.g., park-effects resulting from differing fence distances. It does not, however, correct for park effects like air density that would bias fly ball distance itself. Each of the metrics captured in xwOBA-lite becomes reliable relatively quickly (typically less than 200 PAs), making it potentially more useful in small sample sizes. The power metrics are also sticky year-over-year. There is no year-over-year data on minor league exit velocity, but in the majors it stabilizes extremely quickly (after around 40 batted balls).

I have already discussed the expected home run (xHR/FB) estimation process. I also have estimated expected BABIP based on the power measures and also each player’s batted ball distribution and speed. Similarly, expected BABIP slugging is slugging percentage on non-home run batted balls. With these three pieces of information, xHR/FB, xBABIP, and xBABIP SLG, one can produce key statistics–xBA-L, xOBP-L, xSLG-L, and xwOBA-L.

One point bears repeating: xwOBA-lite is no replacement for the statistics you’re already familiar with. Both because of its weaknesses and because the statistics you already check do a pretty good job of capturing and predicting player performance in their own right, for minor leaguers too. It’s best used as a tool to consider alternate plausible scenarios for minor leaguers, potentially even more useful in small samples. It shows the expected performance for each player given their more process-oriented power measures, among other reliable measures like speed, batted ball mix, and walks and strikeouts. xwOBA-lite can be seen as an additional data point in minor league player analysis; e.g., if xwOBA-lite agrees with scouting and traditional statistics, that might increase your confidence a bit on a player compared to if it didn’t.

The time for speaking has come to an end, on with the metrics!

Note: average exit velocity on fly balls is based on fly ball distance, which is only available as a single figure across levels. For players who played multiple levels, it’s slightly inflated at the harder level and slightly deflated at the lower level. 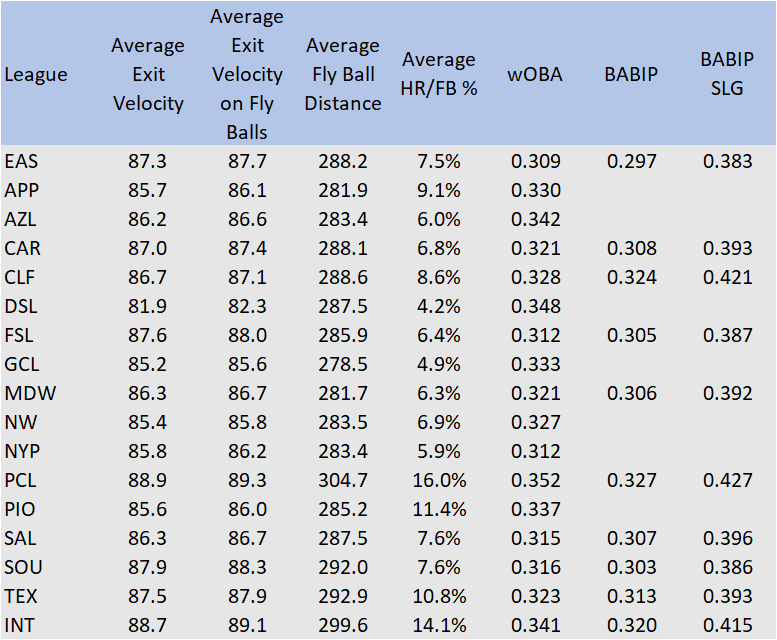