Here are four pitchers who can be obtained for a song but have the potential to return tremendous value on your small investment. These guys have been around awhile but for various reasons are not generally expected to rack up the fantasy points this year. But if you dig a little deeper you can find strong reasons to believe these pitchers are better bets than your leaguemates realize. Let’s take a look and see why each of them makes for a sneaky trade target this season.

Greene started 14 games for the Yankees last year, going 5-4 with a 3.78 ERA in 78 innings. The average starter’s ERA was 3.93 last year, so Greene’s ERA wasn’t bad but was nothing to write home to Momma about either. I think the rest of his numbers indicate better things are in store this year. He struck out 9.27 batters per game, which is very good. He was unlucky on his .330 BABIP so that will likely improve this year. Most importantly, his 15.1% K-BB% was well above the 12.1% league average — and that is a very good thing. His 3.40 xFIP and 3.41 SIERA both indicate he pitched better than his 3.78 ERA (remember that xFIP and SIERA do a better job of predicting the future than ERA does). Greene is a strong ground ball pitcher with a hard sinker that causes hitters to roll over pitches. He allowed .92 HR/9 last  year, which is exactly the same as league average. However his minor league HR/9 were always much lower than that so we may see him allow fewer longballs in 2015. The move from Yankee Stadium to Detroit will help keep the ball in the park as well.

Greene is now 26 years old and was a 15th round draft pick way back in 2009. His minor league statistics were decidedly mediocre. Prospect pundits never predicted success for Greene. The only reason he got the call last year was because the Yankees were desperate. All of those factors help him fit the profile of several other unheralded pitchers who came into the league with zero fanfare yet delivered excellent results on the mound last year. Guys like Jacob deGrom, Matt Shoemaker, Collin McHugh, Dallas Keuchel and others were all late draft picks, were never considered anywhere near top prospects, put up poor numbers in the minors and reached the major leagues aged in their mid twenties. I am not saying Greene is definitely going to match their accomplishments, but I am saying that we should not write him off just because he is not an elite prospect with a 100 mph fastball. The fact that Greene held his own in a difficult situation last year should give us some confidence that he can provide our fantasy teams with mid-range production at a lowball price. Greene is pretty much locked into the Tigers’ starting rotation and will get the chance to prove himself as a legit fantasy starter this year.

Most people believe Sabathia’s days as a fantasy-relevant starting pitcher are in the rear view mirror. After all, he put up a heinous 5.28 ERA last year that was nearly matched by his 4.78 FIP. But he did suffer from a woefully unlucky .350 BABIP and a 1.96 HR/9 rate that was more than double his career average. He lasted only 8 games before going under the knife to fix a knee injury that had been bothering him for awhile, leading to a fastball velocity of only 89 mph that was 5 mph lower than it was in his heyday. The days of him being a 1st or 2nd round draft pick are long gone, but let’s not stick a fork in this guy just yet.

Even though Sabathia was pitching on a gimpy knee last year, he still delivered an excellent 18.7 K-BB% (an extremely important pitching metric). His 3.11 xFIP and 3.07 SIERA were both more than two full runs better than his ERA, showing he actually pitched quite well last season. It seems like Sabathia has been around for eons, but he is still just 34 years old. There are a lot of pitchers older than Sabathia who are still effective. Let’s not write the guy off because he had an injury-shortened year and some horrid batted-ball luck. You don’t want your pitcher to be injured at all, but a knee injury is not as bad as an arm injury. It is still early in Spring Training, but all indications thus far have been positive in terms of his health.  Sabathia is still the Yankees #2 starter. Their rotation is weak and there aren’t any threats to his rotation slot. Sabathia has a long history of Cy Young caliber success on his resume. He won’t be that good any more, but Sabathia is still capable of helping your fantasy team if he is healthy. Right now his asking price in fantasy leagues is at rock bottom. Get him cheaply while you can.

House is not a household name (ugh) but he can pitch. He broke into the majors last year at 24 years of age and put up a 3.35 ERA over 18 starts with the Indians. His xFIP and SIERA were even better at 3.10 and 2.96 respectively, showing that House’s excellent debut season was no fluke. House is an extreme ground ball pitcher. His 61% ground ball rate was 2nd highest in baseball last year. He has a below average fastball in terms of velocity but managed a league average strikeout rate nonetheless. He keeps his K-BB% at an above average 13.5% by limiting walks.

House is another guy who was an afterthought in the draft (16th round) who never made any top prospect lists but flourished when given a chance to start in the major leagues. He is one more data point showing why you don’t need to invest heavily in hot-shot pitching prospects in order to build a solid fantasy rotation. The guys with the 95+ mph fastballs get all the prospect hype, but in recent years the older minor league vets with large, varied repertoires and good command have outperformed the elite prospects in the big show.

Gavin Floyd’s injury is going to give House a chance to join the Indians’ loaded starting rotation to begin the 2015 season. That is kind of like karma, because House is simply a better pitcher than Floyd. The Indians should never have signed Floyd in the first place because they were already loaded with first rate starting pitchers. Corey Kluber, Carlos Carrasco, Danny Salazar and Josh Tomlin are the other good starters. Some people are high on Trevor Bauer but I am definitely not. His peripherals were just plain bad last year and I see no reason to expect them to get any better. The only reason people still see potential in him is because he was the #3 overall pick in the draft in 2011. But enough about Bauer, House is a much better bet and can be obtained for 1/10th the price of Bauer. The Indians have built a powerhouse rotation on the cheap behind their fantastic pitching coach. Read more here: Looking for a Cheap Ace Pitcher? Go to Cleveland.

The Giants are not currently penciling Petit into their starting rotation, preferring instead to give Tim Lincecum one more shot to recapture his faded glory. Petit will be the swing man. I don’t expect that to last long. Petit is a better pitcher than Lincecum and has been for awhile. Petit is 30 years old and first broke into the major leagues way back in 2006 when he was 21. Ever since then he has bounced back and forth between the majors and the minors numerous times in four organizations. He even spent the 2011 season in the Mexican league. He has only accumulated 399 total major league innings. But the last couple of years have seen a major uptick in his performance. His key K-BB% metric has been one of the most elite in the majors. If you are forced to choose one metric to bet the success of your fantasy team on, K-BB% is the one to choose. Not only does it do a great job of predicting future ERA in real life, it is even more important in fantasy leagues where strikeouts are one of the scoring categories. In points leagues where you are punished for walks Petit is even more valuable.

There are no red flags in Petit’s peripherals that scream fluke. His BABIPs are perfectly normal. He was actually very unlucky in terms of strand rate last year. He is a strong fly ball pitcher but has still kept the ball in the park. AT&T Park is the hardest stadium in baseball to hit a home run, so that helps. But the Giants play plenty of games in Coors Field and Chase Field where the ball flies.

If and when Petit gets a chance to join the Giants’ rotation he will make for an enticing trade target. It might be wise to acquire him now for pennies on the dollar. Any Giants starting pitcher is valuable. One with Petit’s excellent peripherals can move the dial in the right direction for your fantasy season. The Giants are a very good team in a strong pitchers’ ballpark. Petit is likely to have a low ERA and garner plenty of Wins for the defending World Series champions. All he needs is an opportunity!

What do you think about these guys? Do you know of any more sneaky-good starting pitcher targets? Let me know in the comments below.

Nick Doran also writes for Fake Teams and Redleg Nation. Be sure to follow him on Twitter @BlazingFastba11. 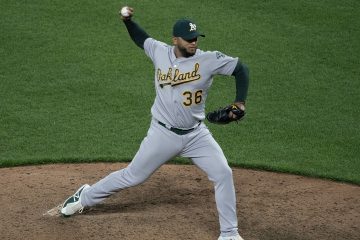