Below is a list of three players who are off to hot starts this spring which mostly means nothing due to the small sample size.  However, all of these players needs to be on your radar in any case due to talent and future fantasy impact.

Brandon Drury-3B, ARI, 22-years-old-  The grand experiment of putting Yasmany Tomas at third base has barely started and it is already not looking good which means the Diamondbacks are going to need to look elsewhere for help at the hot corner.  The guy who figures to be next in line is prospect Jake Lamb who played much of last season at AA batting .318 with 14 home runs.

Lamb progressed all the way to the big leagues by the end of the year where he struggled to make contact and his high strikeout rate was exposed.  I don’t believe that Lamb has what it takes to succeed at the major league level due to modest defense and a high strikeout rate that leads me to believe he will never make enough contact to reach his potential.  So far during spring training he’s slashing just .167/.286/.556.

I’m instead hitching my wagon to Drury who was rated by Baseball America as the best defensive third baseman in the Cal League last season and who is off to a roaring start this spring slashing .467/.526/1.000.  Over 136 games in the minor leagues Drury has a .299/.362/.510 slash line with 23 HR and 95 RBI.  Since Drury’s first stint in rookie ball he has never had a strikeout rate over 20 percent and has showed advanced strike zone recognition and power as he moved along.  This guy is worth owning in all dynasty leagues.

Micah Johnson-2B, CWS, 24-years-old-The White Sox are currently holding an open competition for the starting job at second base during the 2015 season.  In one corner is the 22-year-old Carlos Sanchez who performed admirably last season at AAA.  In the other corner is the much more exciting of the two prospects the 65 grade speed Johnson.

While Sanchez did make it to the big leagues last season for a little over 100 plate appearances he didn’t do much with them.  Sanchez’s biggest tool is his defense since he possesses a just a hint of speed and virtually no power, so far this spring he is slashing a pathetic .235/.235/.235.  Johnson on the other hand has wasted no time showing why he deserves the job by slashing an impressive .389/.450/.722.

The bottom line is that Johnson has far and away the most real life and fantasy potential out of the two players.  Sure, he hasn’t repeated the prolific 61 stolen base numbers that he put up in single-A but he gets on base much more than Sanchez and will contribute more offensively.  Realistically its Johnson’s job to lose and if he plays a full season I expect 5-8 home runs, 30 plus stolen bases, and a .260 batting average. Not bad for a waiver wire grab.

Wilmer Difo-2B, WAS, 22-years-old-If you were forced to pick out one weakness on the World Series favorite Washington Nationals it’s a good bet you would either say the bullpen or second base.  Luckily for the Nationals, their answer at second base may just be distilling into something special down in the minor leagues.  Last season was especially successful for Difo who was named the 2014 South Atlantic League MVP by putting up an incredibly impressive line of .315 BA, 14 HR, 91 R, 90 RBI, and 49 SB.

While Difo was a bit old for the level the numbers were very impressive across the board as he was able to get his strikeout rate down to a 10.7 percent mark which was his best since rookie ball in 2011.  Difo has proven to be an incredible defensive second baseman as well earning recognition from Baseball America as the best defensive second basemen in the South Atlantic League.  He is currently holding his own in spring trainings slashing .429/.467/.643 over his first 14 at-bats.

With 70 grade speed and an above average hit tool Difo should have what it takes to make it to the show by the beginning of 2017.  The Nationals organization does not have much in the way of prospects at second base and unless a trade is made he represents far and away their best internal option.  Difo is still unowned in most dynasty leagues and could provide big dividends later. 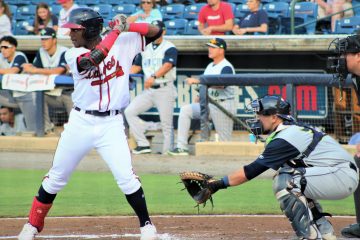