Don’t You Forget About Me: AL Prospect Edition

As a dynasty league player and MiLB fan, you probably gravitate toward what is shiny and new. It’s a natural impulse, and it’s one I have to fight myself all the time.

The following names might not inspire tremendous confidence in you, as you’ve seen them struggle and have become acutely aware of their mortaility over the past few seasons. But these names, buried deep the in the recesses of your mind, deserve a quick second look.

Let’s examine four players you’ve long forgotten in the AL this week, and we’ll take the same approach to four in the Senior Circuit next Monday.

Cuthbert has been on the fantasy radar since his breakout 2011 season, when he hit .267/.345/.397 as an 18-year-old in Single-A. Cuthbert followed up that campaign with a disastrous stint in High-A in 2012, then found success at the same level in 2013 before struggling with a promotion to Wilmington. He’s still not showing huge power, but Cuthbert is holding his own in Double-A as a 21-year-old, and he should creep his way back to fantasy relevancy as the season progresses.

Through 157 PA, Cuthbert is hitting just .237/.331/.393 with six homers, but he’s being weighed down by a .252 BABIP. His 12.7 BB% is a career best and a super encouraging sign for a hitter who’s struggled with approach in the past. Cuthbert is striking out less than he did a year ago, too. Overall, he’s good for a 106 wRC+ right now, and I’d expect that to increase as his BABIP regresses to the mean. With Mike Moustakas no longer profiling as the Royals third baseman of the future, there’s some opportunity for Cuthbert to make an impact at the MLB level at this point next year.

De La Rosa is no longer prospect-eligible, having thrown 60.2 innings for the Dodgers way back in 2011. Perhaps that helps to explain why he’s largely absent from the national baseball consciousness despite arguably having more upside than other pitchers in his organization like Brandon Workman and Anthony Ranaudo. Nonetheless, now healthy and pitching well in Triple-A, RDLR finds himself on the cusp of MLB relevancy once again.

De La Rosa has thrown just 53.1 innings in 10 starts in Pawtucket this year, so it’s clear that going deep into games is not a strong suit for the 25-year-old. That being said, he’s striking out 23.6% of the batters he faces, and while his 10.5 BB% isn’t great, it’s a step in the right direction. With Felix Doubront on the DL and Jake Peavy and Clay Buchholz both struggling mightily, Boston is in need of rotation reinforcements. While many think RDLR’s future is still in the bullpen, I bet he gets one last shot at starting in the majors this year, and his strikeout potential makes him an attractive fantasy option.

When the Rays drafted Mahtook in the first round of the 2011 draft, they probably assumed he’d be a major leaguer at this point in time. The outfielder from LSU was billed as a fast-mover with a modest ceiling, but I think the general consensus was that his bust potential was pretty low. While we’ve yet to reach that territory with the 24-year-old, his performance in the minors has been pretty uninspiring to this point.

That being said, Mahtook is hitting .313/.375/.488 through 184 PA in Triple-A this year, swiping eight bases and walking at a 7.6% rate. Unfortunately, his .431 BABIP should demonstrate that this start isn’t real, and his 26.6 K% is pretty ugly, too. It looks like Mahtook has an MLB future as a fifth outfielder who can run a little bit, but don’t be fooled by his hot start this season – he’s still not a good fantasy prospect.

When the Twins acquired May from the Phillies before the 2013 season, many assumed that a move to the bullpen would be in short order. But despite May’s troubles with command, Minnesota has elected to keep him in the rotation. It appears as though their decision is finally starting to pay some dividends, as May has been quite good as a starter in Triple-A this season through 48 innings pitched.

May’s ERA sits at an even 3.00 through his first nine starts, and while he’s still walking a few more batters than you’d care to see, his strikeout and ground ball rates are both quite good, and he’s throwing 64% strikes. May is always going to give away too many free passes, but I retain more optimism now than I did last year that he could survive as a No. 4 MLB starter, especially in a spacious ballpark that could mask the homer tendencies he’s shown in the past. The Twins can’t run Mike Pelfrey and Kevin Correia out there forever, so I bet May sees some MLB time at some point this year. 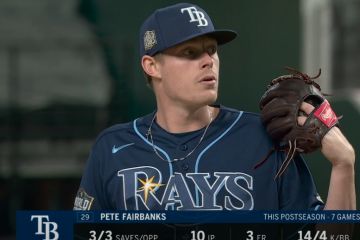 Dynasty’s Child: The Dumb Rockies and Other Tender Topics

Don’t You Forget About Me: AL Prospect Edition