One often-overlooked factor that may contribute to a player’s future performance, whether positively or negatively, is where they call home. A range of factors can influence a player’s performance on the field that you should be sure to consider when drafting and/or trading for a particular player in your 2021 fantasy league. Some MLB moves may be a short-term impact on a players performance such as changing from the American League to National League, whereas others could be a longer-term impact on the player’s outlook such as moving from an extremely friendly hitters park such as Coors Field, to a more neutral, or even pitcher-friendly park.

After spending the better part of seven years in Baltimore (with an interim stop in Los Angeles), Machado made a full-time switch to the National League when he decided to sign with San Diego prior to the 2019 season. In his first year, he struggled, hitting only .256/.334/.462 over 156 games and the Padres stumbled across the finish line with a below .500 record. Many analysts downgraded Machado’s ranking heading into 2020, noting his increased strikeout rate and declining batted ball metrics. A year later, and we all can see his ranking downgrade was simply foolish and premature, and I’m taking a victory lap for holding my star third baseman. After adjusting to his new home in the NL West, Macho man finished third in the NL MVP voting, hitting .304/.370/.580 with 16 home runs and 47 runs batted in. Now, he’s anchoring one of the most dangerous lineups in all of baseball. Considering his elite talent, most analysts wrote off Machado too quickly following one down season, his first with a new team, in a new league, which could have been avoided if we factored in his change of scenery.

Heading into the 2021 season, here are some things to keep in mind about new faces in new places that may give you a leg up on your competition.

Below are a handful of player valuations using a scale ranging from 🔥 🔥 🔥 as the best outlook to ❄️❄️❄️ as the worst outlook.

Anyone paying the slightest attention to the baseball world this offseason is likely tired of hearing about Trevor Bauer, his free agency, social media drama, etc. However, coming off an NL Cy Young-winning season and joining one of the top offenses and bullpens in the majors is worth paying the utmost attention for fantasy managers. The former Cincinnati Red dominated during 2020 and is now the highest-paid player in the game, and rightfully so. His pine-tar aided (so I presume) supremacy on the hill was unmatched, leading to career highs in a number of categories, notably strikeout rate and walk rate, and coupled with his long-term history of being healthy and you have yourself an ace. However, he did benefit from a strand rate of nearly 90% and his FIP/xFIP were both well over a run higher than his ERA, which both signal regression, and don’t forget about his career ERA that’s nearly 4.00. He’s getting a significant bump considering park factors moving from Great American Ballpark to Dodger stadium, but it’s possible we may have just witnessed Bauer’s best season. In dynasty, I’d consider offering his services to other managers as your return will never be higher. In redraft formats, Bauer’s current ADP has him as a Top-5 starting pitcher but I’m only looking to draft him in the back half of the Top-10. Either way, you’ll be happy he’s on your roster.

Perhaps one of the most polarizing players to swap his uniform this offseason is the former Rockie, Nolan Arenado. Coming off his worst season as a professional and leaving the friendly confines of Coors Field has sent Arenado’s ADP and dynasty rankings tumbling downward. Further, the slugger is still dealing with a shoulder injury that zapped some of his power and ended his 2020 season early. Heading into 2021, there are more questions than answers surrounding Arenado and what to do from a fantasy perspective. The elephant in the room here is Arenado’s career splits, which have managers running for the hills and the uncertainty around his health only adds to the complexity around the decision of what to do next.

I have an idea. What if, and hear me out, you do nothing? If you’re lucky enough to have Arenado on your roster, I’m strongly encouraging you to hold him. If the 2020 season leaves a sour taste in your mouth, you’re not alone. But, absent 2020, Arenado has been one of the most consistent players in the majors, averaging 146 games played, 33 home runs, 99 runs batted in, and a .290 average from 2017 through 2019. Now, three years of past statistics won’t win your league in 2021, but if Arenado returns to full health, a similar type of season will be plenty to rank him in the Top-5 third basemen.

“Yeah, but, he’s leaving Coors! There’s no way he’ll perform at that level!”

Sure, you might be right. But let’s also consider that you probably said the same thing when D.J. LeMahieu left Colorado after the 2018 season, and all he has done is win a batting title, two silver sluggers, and two Top-5 MVP finishes. The choice is yours of course, but if history is any indication, I’m opting to keep the elite talent and trust that he will figure out his new digs, in time.

Cover your eyes before logging on to Villar’s Statcast page. Ok, I tried to warn you. The speedster spent time in Miami and Toronto last season before hitting free agency and eventually landing in New York. The 2020 season was one to forget for Villar after logging career lows in nearly all offensive categories. Known for his speed, he still might be a cheap source of steals going forward, but the power that differentiated him among his middle infield colleagues is all but gone at this point. Further, his signing on with the Mets locked him into a utility role with both shortstop (Lindor) and second base (McNeil) being occupied barring an unforeseen health issue. His days as a fantasy stud are long behind him and with an expected decline in playing time, it’s unlikely that he’ll see your starting lineup much, if at all. We have the waiver wire for a reason, don’t be afraid to use it.

Dahl makes me sad. He has so much talent, but just can’t seem to stay healthy. Another injury-riddled season led to being non-tendered by Colorado, coming as a bit of a surprise to some considering he’s only 26 years old. Dahl’s mix of power and speed is coveted across fantasy leagues, but over recent seasons his upside has come with tremendous risk, and unfortunately, the added risk hasn’t come with any reward at all. This past September, he underwent shoulder surgery, but is expected to be healthy for spring training and is currently penciled in as the Rangers starting left fielder. In dynasty, there is simply too much risk that comes with Dahl to roster him if you’re contending. However, Dahl makes an interesting target as a rebuilder as you likely can’t obtain another player with his upside for such a low return. To complicate matters further, a move from the hitters paradise that is Coors Field to Globe Life Park in Arlington (the most pitcher-friendly ballpark according to ESPN park factor, 0.57 is the lowest of 30 parks for home runs) coupled with an expected learning curve following a swap from the National League to the American League and there’s not much of a reason to take a shot on Dahl this season.

Only a year removed from being diagnosed with leukemia, Cookie Carrasco made a triumphant return to the upper echelon of starting pitchers in 2020. He did benefit from an 85% strand rate and his FIP/xFIP exceeded his actual ERA by over a run, so some regression is probably in the cards, but nonetheless, his 2020 performance was superb. So good in fact, that New York wanted him in addition to Francisco Lindor when the two clubs agreed to a swap this offseason, so he’ll make his home in Queens this coming year. I expect the veteran to hit the ground running though he has limited experience against the NL East, having never started a game in Citi Field and only three career regular-season starts versus his new divisional opponents. New York moved their fences in a couple of years back and now find themselves in the Top-10 most hitter-friendly parks as well, a slight decline compared to the park factor for Progressive Field. The days of a sub 3.00 ERA are likely behind him, but I think Steamer’s projections of 29 starts, 3.67 ERA, and 198 strikeouts are right on the money. Win-now teams will want to get their hands on Carrasco, who is under contract through 2023 and should have plenty left in the tank.

Well, it pains me more than you know to cover Benintendi right now. Following a disappointing 2019 campaign, Benny and fantasy managers were hopeful that 2020 would be a season of redemption. Instead, it was another season of despair. The 26-year-old continued his whirlwind decent into the abyss of dynasty league basements everywhere after an injury-plagued 14 games that seemed to end quicker than it began. Fantasy managers have probably had it with their former first-round pick and apparently so did the Red Sox, who shipped him off to Kansas City this month. Following a couple years of frustration and underperformance, this is probably a welcome change of scenery. Benny is capable of carrying a lineup when he’s hot, but his 20 HR, 20 SB, .271/.352/.424 from 2017 is now just a distant memory. He’ll be given every opportunity to lock down a regular spot in the Royals lineup, where hopefully there is a little less pressure to perform and he can find his old groove. Kauffman Stadium is more of a neutral hitters environment compared to Fenway Park, but not a significant change based on park factor. I am still a believer in the talent but my patience is running out. 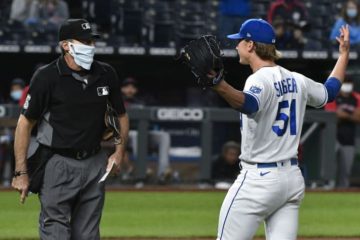