Everyone can have a little Jhoan Duran information, as a treat.

Welcome to an extra installment of our Prospect Spotlight series, where we pair our prospect rankings with a deep dive on one of the players in that ranking. Here, we’ll dive deeper into the prospect’s fantasy profile, highlighting their background, skill set, and what we see for them coming down the pipeline. Prospects are the lifeblood of any dynasty league and we hope to bring you more great info on these rising stars in 2021 than ever before.

The Twins organization has started to churn out talent at an alarming rate. The front office in Minnesota excels at targeting and developing hitters, but their work on the mound is quickly catching up in terms of depth and top-end talent. By and large, the Twins have been able to find steals in the later rounds of the draft by gravitating towards big-bodied pitchers with good fastballs and mound presence. When the Twins sent Eduardo Escobar to the Diamondbacks in exchange for Duran and two other Single-A players, they clearly saw something beyond Duran’s stat line that they could work with. Duran’s numbers had just started to turn the corner in 2018 when the Twins traded for the 6’5″, 250-pound hurler, but they really took off once he touched down in Cedar Rapids.

Duran has an incredible fastball (at least in terms of velocity) that he throws from an over-the-top delivery. The heater has touched triple digits but tends to sit in the mid-to-upper 90s during games. He pairs the fastball with a high-spin curveball that drops off the table, a developing change-up, and a peculiar pitch that he refers to as a “splinker.” When looking over Duran’s minor league track record, the eye-popping SwStrk% (swinging strike percentage) numbers really stand out. The velocity alone will have helped create the giant whiff metrics from his time in the lower minors, as he was simply able to overpower most batters. However, the 20.2 SwStrk% he turned in during 37 innings at Double-A cannot be ignored. When opposing batters were able to connect with the baseball, they tended to hit it into the ground, evidenced by Duran’s 63.3% groundball rate at Double-A in 2019. I am not aware of an established “holy trinity” of pitching, but if someone told me that it was, 1) missing bats, 2) inducing ground balls, and 3) limiting walks, well, I wouldn’t argue too much. At present, Duran excels at the first two aspects of my totally off-the-cuff pitching trinity and isn’t too far behind when it comes to limiting walks.

Duran’s massive frame helps his arsenal play up, both in terms of extension and angle of attack. The curveball has a devastating break and is ready to eat up major league hitters. Now, living low in the zone (pretty much everything Duran throws has downward movement) can leave a pitcher vulnerable to the long-ball at the major league level, as more and more big league hitters are adjusting their bat paths to capitalize on pitches thrown in the bottom half. That said, if Duran can continue to hone his control and command – even a little bit – the results have the potential to be incredibly valuable for fantasy managers. Keeping such a massive body healthy will undoubtedly be a challenge for Duran over the course of his career, but his delivery is smooth and he generates velocity with ease. Full steam ahead.

Duran will start this year in the minor leagues (if we get…no, I’m just going to avoid thinking about that possibility), likely heading to the newly-affiliated St. Paul Saints in Triple-A. The Minnesota rotation recently added some depth with the Shaun Anderson trade and the J.A. Happ signing, but I see both of those moves as positives for Duran’s eventual landing at Target Field. By adding those two pieces, the Twins have added some cushion to their rotation and will be able to avoid calling upon Duran to join the big club before he is ready. The floor for Duran is a high-leverage power reliever, but with all the advances he’s made since joining the Twins, I am confident that his future lies squarely in the top half of the Twins rotation in 2022 and beyond. 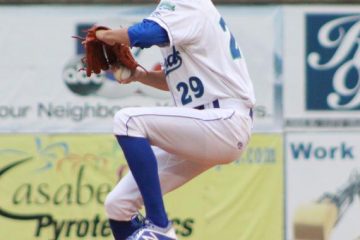