This is a companion piece to our annual Top 50 Dynasty League Second Baseman series. The opinions below are our own and do not reflect the TDG consensus. Each of these players has fans among our colleagues.

In early September the TDG Roundtable touted Ty France as a winner with him landing in Seattle as a result of a trade between the Padres and Mariners. This re-location finally offered France regular playing time at the major league level after struggling to find consistent at-bats in San Diego. He has a proven hit tool with strong numbers throughout the minor league levels, capped off with a ridiculous 2019 season at Triple-A in which he slashed .399/.770/1.247. He spent all of 2020 at the major league level posting strong numbers with an above-average 132 wRC+ between two teams. Overall he slashed .305/.468/.836 on the season proving he is worthy of being an everyday starter.

The key to France’s future is playing time and opportunity, which according to a December media call with Mariners manager Scott Servais, he will have on an everyday basis in 2021. This could position the 26-year-old for a breakout campaign in the upcoming season. In his limited time in the majors, France has shown an above-average hard-hit rate (37%), barrel rate (7%), and launch angle (15 degrees). These numbers show promise for a continued high batting average with the potential for plus-power at the major league level. Additionally, if France can drop his strikeout percentage to under 20%, where it was his entire minor league career, and maintain strong plate discipline his potential may be even greater. (Bob Cyphers)

In December 2019, the Rays traded Tommy Pham and Jake Cronenworth for Hunter Renfroe, Estaban Quiroz, and Blake Snell’s favorite player, Xavier Edwards. Most of the discussion of this deal focused on Pham, Renfroe, and Edwards. Few paid much attention to Cronenworth entering 2020, with zero analysts drafting him in the eminent #2EarlyMocks.  A year later, his #2EarlyMocks ADP rank is #138 overall, an improvement of 500+ spots compared to 2019. How real is his breakout?

In the minor leagues, Cronenworth consistently showed strong K% and BB% skills, equivalent to a ~16 K% and ~11 BB% at the MLB level. An extreme lack of power is the reason he never made much noise as a prospect pre-2019, however, with only 12 homers from 2015 through 2018. He broke out at Triple-A in 2019 at age 25, finding some home run pop, and hasn’t stopped hitting since. He should be good for 10-15 stolen bases in a full season, with good K% and BB% rates, so much of his future outlook depends on whether his power is more reminiscent of pre-2019, or of 2019 and 2020. His hard-hit rate, average exit velocity, and predictive wOBA (.354) were each solidly above average in 2020, lending some confidence to his recent power surge. On the other hand, his pre-2019 track record has a much larger sample of PA so he’s likely to regress in 2021, and he’s already 27, capping his upside somewhat. All things considered, I’m comfortable projecting 10-15 home runs and 10-15 stolen bases with a solid, above-average BA and OBP moving forward–solid but not star-level. (Jordan Rosenblum)

Brandon Rodgers is a name that is trending down this ranking season after another lackluster showing at the major league level in 2020. Now in all fairness, some of his struggles can certainly be attributed to injury, but unfortunately, both are becoming common trends for the former first-round draft pick. Since being called up during the 2019 season, Rodgers has only amassed 32 games played at the major league level producing a slash line of .196/.227/.462. Again, his playing time, and most likely his production, have been marred by injuries as he has suffered significant shoulder injuries in each of the past two seasons. Rodgers has produced solid stat lines and shown the ability to improve as he climbed the minor league levels, but his ascension to the big league has been slower than his fellow top draft picks in 2015 (Dansby Swanson and Alex Bregman). For these reasons, plus the arrival of new and exciting prospects at the position, Rodgers is a name that I see sliding down the dynasty rankings.

Now just to be clear, I am not saying that Brendan Rodgers is a name that should be forgotten or given up on, as his top draft pick pedigree cannot and should not be ignored as he is still only 24 years old. His own manager recently said that he has very little to prove in minors and just needs to hit at the major league level. Rodgers will most likely be involved in a position battle once again this year and have to earn his playing time, but if he can enter Spring Training fully healthy and grab hold of regular playing time he may also be on the verge of a breakout season despite finding his name on the wrong side of this article. (Bob Cyphers)

Players like Jonathan Villar–offering fantasy value primarily through stolen bases–are extremely volatile. He’s a lackluster infielder and below-average MLB hitter (95 career wRC+), but offers a lot of fantasy punch as long as he is playing because he steals a ton of bases without killing you in home runs, typically offering 15-20 in a full season. The problem is that this type of player has limited value to MLB teams so their playing time risk is astronomical. At press time, it is far from guaranteed Villar will land an everyday job. If he does, you’ll be thrilled with his production, 30-40 SB and 15-20 HR, with below-average rate stats, like usual. It’s more likely he’ll be a utility bat and fail to eclipse 400 PA, which means he’ll be on a lot of waiver wires by the end of 2021. Invest with caution. (Jordan Rosenblum) 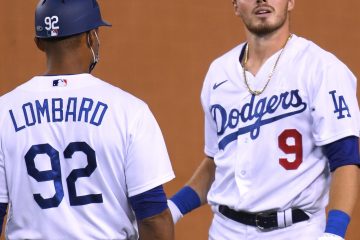 6 players to trade for in Dynasty Football for 2021