While we still have playoff drama, the offseason has already begun for most teams. This has meant tons of mock drafts and more time for in-depth ruminative analysis–one of my favorite times of year.

Like others before me, while looking into players, I found myself wondering about Tom Tango’s post from March, “Statcast Lab: xwOBAcon v Predictive wOBAcon” (note: wOBAcon stands for wOBA on contact).  In it, he explains how xwOBAcon describes a particular play, awarding a player the expected outcome of similar batted balls. In contrast, predictive wOBAcon describes a particular player, showing how much a particular batted ball is indicative of true skill and future success.

He presents the following graphic, splitting batted ball events into 16 buckets based on launch angle and whether they’re hard hit (“strong,” 95 MPH or higher). For each bucket, the associated actual wOBAcon (xwOBAcon) and predictive wOBAcon value are each shown. 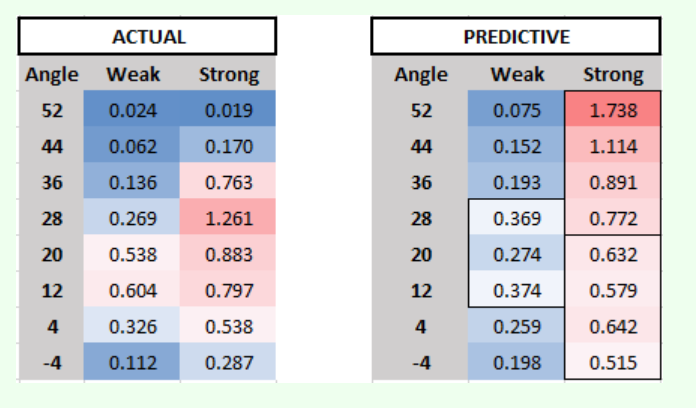 Hitting it hard is better than hitting it soft (eureka!) and hitting it hard at higher launch angles is more indicative of future success, even though at the highest launch angles these are almost always outs–think, “major league pop-ups.” The importance of accounting for launch angle in hard-hit rate, and awarding hitters more credit for hard hits at higher launch angles, which requires more strength, is what inspired Connor Kurcon’s “dynamic hard-hit rate,” and associated predictive wOBAcon variation. His post is what got me thinking about predictive wOBAcon (pwOBAcon) myself, along with Max Goldstein’s own variation on the topic–I’d suggest bookmarking both essential resources (I believe Connor’s leaderboards are now housed here). Like that famous philosopher once said, “sooner or later, pwOBAcon comes for us all.”

After reading Tango’s post, I wanted–no, needed–to see the pwOBAcon values for each player, as well as the associated predictive wOBA (pwOBA) for each. While he did not go into detail on exactly how he generated the predictive wOBAcon buckets, they’re based on the relationship between each of the 16 buckets in one time period (perhaps year one) and predictive wOBAcon in a later time period (perhaps year two). Some twitter sleuthing reveals his process probably involved some variation of regressing year two wOBAcon on each year one bucket (e.g. percentage of batted balls hit between 24 and 32 degrees at 95 MPH or higher). This would provide a predictive wOBAcon value for each bucket (I tried it for one bucket as a check!).

In any case, I wanted to keep things quick and simple so for the pwOBAcon table below I just went with the buckets provided by Tango in the graphic, pulling the raw data from Baseball Savant. I assigned every batted ball a value depending on which predictive wOBAcon bucket it fell into. The table below shows predictive wOBAcon for each player, as well as their associated predictive wOBA. Here, predictive wOBA is derived from predictive wOBAcon, actual 2020 K%, and actual 2020 BB%, a predictive version of xwOBA. Including predictive K% and predictive BB% in predictive wOBA would be an improvement but I wanted to maintain a focus on how pwOBAcon changes pwOBA in this article. The table also shows various other measures–e.g., 6.9% of Bryce Harper’s batted balls were hard hit and with a launch angle between 24 and 32 degrees compared to a league-average 5.2% of batted balls in this same bucket. Predictive wOBAcon should be broadly similar with Kurcon and Goldstein’s measures as they’re all theoretically similar, though the methodologies each have their own unique spin so there will be some differences too. Different measures can serve as robustness checks; triangulating them can improve your confidence in understanding a player’s true ability.

Notes: the correlation between xwOBAcon as generated by the simplified method in this article (based on 16 buckets) and Baseball Savant’s much more thorough xwOBAcon (which, for instance, makes much sharper, better distinctions between batted balls) is .86 (both for every player with data and for player’s with a minimum of 80 batted ball events). The pwOBAcon and pwOBA values were set to equal the MLB average wOBAcon and wOBA in 2020. 10-20-2020 note: a previous version of this article stated that Tango did not provide pwOBAcon buckets for batted balls with a launch angle under -8 or over 56. This was incorrect, he grouped them in the next closest bucket–I took the same approach in the table below.

TDG Roundtable: Players we got right in 2020

TDG Roundtable: Players We Got Wrong In 2020