Keaton It Real: The Buyers Guide To 1B

I know it’s early for some to be thinking about whether to phone it in for the year or go for the title. But this series is going to span over a few weeks, so I figured I’d start it now and you can use it as a guide down the road, as the title suggests.

In this series, I’m going to go position by position and highlight a few names I would target if I am going all-in for a title this year, and a few names to target for a rebuild.

Starting with my favorite position on the diamond, here are the first basemen.

I’ve talked about Mancini on Dynasty’s child a few times as a guy I really liked coming into the season, and he’s off to a really good start for a really bad team. He’s doing a bunch of things really well; most notably, he’s putting the ball in the air a bunch more than he had previously. His launch angle, while still slightly under league average, is double his career mark this season (currently at 10 degrees), and it’s coupled with his consistent double-digit barrel rate, leading to a ton of success that eluded him last season. Two seasons ago, he broke out and showed people what he was capable of; last season saw some regression (seemingly due to BABIP luck and a lack of loft). This season, he’s reversed that and is back to posting some really sexy results. He’s still not one top player at the position and a lot of people still remember last season so it may not take a bunch to acquire, but he should be well worth it.

The bat has never been the issue with Martinez, whose fielding is not very good. In just about every case with fantasy, the defense doesn’t matter. However, with Martinez, he’s the rare case where it did. Late last season and early this season Martinez was losing playing time because of it. He became the benefactor of some early injuries though and hasn’t looked back. Currently slashing .343/.387/.471 and has forced himself into the everyday lineup regardless of his defensive abilities. Martinez is another guy who shouldn’t be too difficult to acquire due to his age and the potential for his at-bats to be taken away, but as long as the Cardinals continue to run him out there he’ll continue to reward fantasy owners.

I spoke at length about Matt Thaiss a couple of times on Dynasty’s child and just in case you don’t listen to the podcast (shame *bell* shame *bell* shame *bell*) I’ll repeat myself here. As far as prospects go, Thaiss is relatively under the radar. He’s not talked about very much because he doesn’t have any one particularly loud tool, but he does just about everything well. He doesn’t have much, if anything, left to prove at Triple-A besides having a couple of fossils in his way at first, but he has started getting some run at third so maybe that’s his quickest path to the majors. Anyway, he has a really good hit tool that’s allowed him to hit for average at every level, and the power started coming on last season, smacking his most as a pro with 16. He even has some wheels on him and can add double-digit steals. He feels like a safe non-sexy high floor prospect that fantasy owners tend not to care about but, those guys tend to be useful and I think he will be too.

This one is more of a reach, as first base is a weird position right now for prospects, but Casas has the potential to be the prototypical power first baseman we’ve come to love. His average hit tool and plus power should allow him to develop into a consistent 30-35 homer guy with a .270 average. Originally drafted as a third baseman, he’s received the bulk of his playing time in his 32 professional games at first. Only able to play two games last year due to a thumb injury, Casas is still only 19 and with a stash-and-hold to see how he progresses as he might have just as much potential as any other first base prospect in the game at the moment.

Keaton O. DeRocher: @TheSpokenKeats
And check out my Author Archive for everything I’ve written

If you love what we do here and want to help us keep making it, or if you want downloadable access to a whole ton of content, you can donate a minimum of $5 to receive exclusive downloadable access to the entirety of our ultra-deep dynasty rankings. That includes Bret Sayre’s Top 500 for standard leagues, Tom Trudeau’s Top 500 for OBP leagues, Jesse Roche’s Top 200 prospects, and our entire rankings series in the downloadable form. For more information click here. 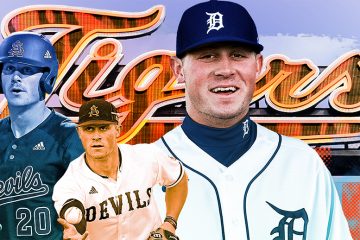 Keaton It Real: The Buyers Guide To 1B