Finding Fantasy Value and Flaws within “The Opener”

At the start of play on May 12th, the solo MLB leader in Games Started is Tampa Bay Rays right-handed pitcher Ryne Stanek (10). Stanek can only be described as an old-school, reliable starting pitcher who takes the ball every fifth day for the Tampa Bay Rays, sometimes even on short rest. With a 7-3 record in his starts, Stanek has led the Rays to a 1.5 game AL East lead. Wait … I’m being told he has not gone more than two innings in any appearance yet. Well, how is this gentleman ever going to get credited with a win, when there is a five-inning requirement? What a thankless position he has been put into.

What started out as a presumably short-term, gimmicky idea by Kevin Cash’s Rays in 2018 began to gain steam elsewhere, and “The Opener” has carried over into 2019 as well. Whether it be a team who does not want to replace their injured starter with a subpar “quad-A” starting pitcher, to limit a young pitcher’s innings or, in the Rays’ case last year, because in July they literally didn’t have a pitcher on their depth chart capable of starting games, the Opener is becoming more prevalent. I’d first like to look at this from a fantasy perspective, while also diving into an archaic scorekeeping rule that needs to evolve with the times.

Before anything else, let’s make it clear that The Opener himself has no value whatsoever in fantasy baseball. This role cannot qualify for wins, saves, or holds, and would rarely go to a high-leverage reliever able to contribute in K’s, ERA, or WHIP. Sorry, Hector Velazquez, Nathan Karns, and Luke Bard. However, the “Bulk Guy,” who pitches second, commonly throws the bulk of the innings and most importantly can qualify for the win. This is where the value lies to round out your staff in any league 12 teams or deeper. Last year, the most notable Bulk Guy was Tampa’s Ryan Yarbrough, who had a record of 16-6, incredible considering 30 of his 36 appearances were in relief. A poor start in 2019 in his first four Bulk appearances had Yarbrough sent to the minors early on.

The three Bulk Guys who have had the most success in the first quarter of this season are Jalen Beeks (TBR), Yonny Chirinos (TBR) and Marcus Walden (BOS). The unknown of when these pitchers will pitch is a drawback of rostering them, even though the statistics speak for themselves thus far. In Beeks’ three recent appearances as a Bulk Guy, he’s thrown 14 2/3 innings, with 16 strikeouts, two wins, an 0.61 ERA, and .122 Opponent’s BA. Beeks’ 2.91 FIP on the season backs up what he has done so far. While Chirinos has four of his eight appearances as a starter, a couple of these starts were announced on short notice, in addition to three appearances as the Bulk Guy, all three of which resulted in Wins. Starting Chirinos each week takes some trust, especially with the unknown of who his opponent will be and when, but it has paid dividends as he sits as the 30th ranked pitcher on ESPN’s Player Rater, with a 5-1 record, 3.61 ERA, and 0.92 WHIP in 42 1/3 innings. You will also find Walden in this range as the 37th ranked pitcher on the player rater, thanks to his 5-0 record out of Boston’s bullpen this year despite only throwing 20 1/3 innings, with a 1.77 ERA, 0.79 WHIP, 3.02 FIP, and 23 strikeouts. Walden has been handed the baton by Hector Velazquez three times, all resulting in wins. While I don’t expect any of these pitchers to emerge as reliable rotation pieces, although Beeks may have that ceiling long term, any of them are the perfect 9th pitcher on a Roto staff and can be found on Waivers in leagues of all sizes. And in the case of the Rays, a little bit of attention paid to their rotation can help you anticipate when to deploy their Bulk Guys.

The Fault in our Wins

When it comes to the Win/Loss rules for pitchers, the minutiae can be found here, but a couple of details could use some tweaking. Firstly, if a starting pitcher with the lead cannot make it through five full innings, “the relief pitcher who, in the official scorer’s judgment was the most effective,” gets credit with the win. With the Opener in play, it’s becoming more apparent that the starter deserves to be considered for the win if he was the most effective pitcher in that game. We’ve all seen instances of a young starter on a pitch count laboring through the fifth inning and a manager debating whether it’s worth squeezing out the last out or two to get the kid a win, which is just silly. The opener gives a reason to change that. I would contend, “If the starting pitcher does not go five innings and departs with the lead, it is the scorekeeper’s discretion to choose any pitcher who was most effective.”

Conversely, why should the scorekeeper’s discretion apply only to the winning pitcher, and not the losing pitcher? Let’s use an example on this one. 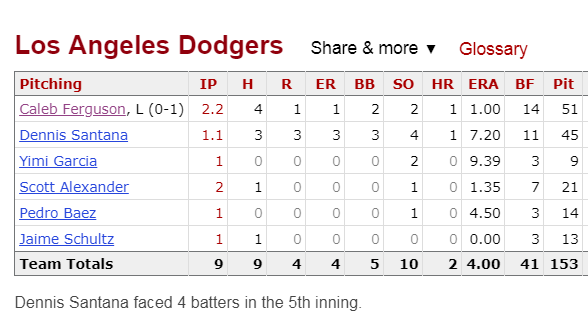 On April 13, the Dodgers started Caleb Ferguson who lasted 2 2/3 innings, allowed 1 run, and departed in a 1-0 game in the third. Dennis Santana followed, allowing 3 runs in 1 1/3 innings, and departed trailing 4-1. Shouldn’t the scorekeeper decide who was “least effective” of these pitchers who pitched in the first 5 innings? In this case, that would be Santana.

This all comes full circle back to poor Ryan Stanek. The Ringer did a terrific job outlining how Openers and Bulk Guys affected the benefits, sponsors, and likely long-term salaries of these players. Essentially, Ryan Yarbrough and Ryne Stanek broke the WAR metric last year. In terms of how it applies to 2019, as mentioned previously, the Rays are 7-3 in Stanek’s starts. In nine of those ten starts, all 1 to 2 inning appearances, he has allowed zero runs, but Stanek’s record is 0-1 because he cannot qualify for a win with the current rules, and can certainly qualify for a loss every time out. He’s started 39 games in his career and has won zero of them, despite a career 3.39 ERA. His only two wins in a 2-4 career record have come in non-Opener relief appearances. To quote Rick James, “THAT is absurd.” 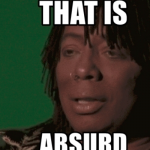 For example, in an 11-7 win on April 12th against Toronto, Stanek departed this game with a 5-0 lead. He deserves the win in that case.

As advanced metrics become more prevalent, and the Win statistic holds less weight, maybe this will seem irrelevant to some. But the first thing you see when opening your newspaper or your app is the final score alongside the winning and losing pitchers, and the qualifications for those are outdated. The game has changed. Old Hoss Radbourn is not leading the league with 60 wins and 73 complete games anymore, as he did in 1884. Ryne Stanek is leading the league in games started and when he’s up for arbitration in a couple of years, he deserves more than two wins for his efforts. Assuming he gives me a higher cut than Matt Kuchar’s caddie gets, I’ll be happy to be his agent.

Finding Fantasy Value and Flaws within “The Opener”