The A’s lefty phenom is almost certainly on his way to the MLB team this year. After recovering from Tommy John, the youngster came out like gangbusters in 2018. Now touted as among the best pitching prospects in the game, Luzardo made himself known at 20 years old. Equipped with a fastball, curve, and change-up, the lefty has all the tools he’ll need to succeed at the Major League level. Luzardo certainly looks the part of a future ace at 6’1″ 205 LBs.

The 21-year-old only started four games at Triple-A, but more than made his case in Double-A: striking out 9.84 per-nine and walking only 2.06 per-nine, keeping the ball in the ballpark with a .57 HR/9, and posting a stellar ERA of 2.29. The Texas league plays fairly neutral offensively but does give up plenty of dingers. Thus Luzardo’s performance wasn’t a product of his environment. Things got a bit bumpier in his short stint in Triple-A which was likely a bit more environment-induced (PCL). Though he still managed to strike out double-digit batters, which is encouraging.

Luzardo is likely pretty expensive after his breakout in 2018, but also worth the price. If you’re rebuilding you should definitely have the 21-year-old on your radar, as his youth, 2018 showing, three-pitch mix, and proximity to the Majors make him a strong future anchor of your staff. You could try leveraging another owner by using his PCL numbers to cast some doubt and the fact that he’ll unlikely start the year with Oakland to get a slight discount in trade negotiations. Regardless of how you acquire him though, he’ll be worth it.

Corbin was mediocre for, like, a long time. Like since 2012. I mean he had a few years of posting some decent ratios in the mid threes. However the strikeout rate always hampered Corbin’s value, and he remained only partially on dynasty radars. Until in 2018 ol’ middle of the road Corbin spiced things up, and broke out!

As you can see Corbin started using his slider of a lot more starting in 2017, but increased his usage even more in 2018. With good reason too. Let’s take a peek at which of Corbin’s pitches have generated the highest K% throughout his career. 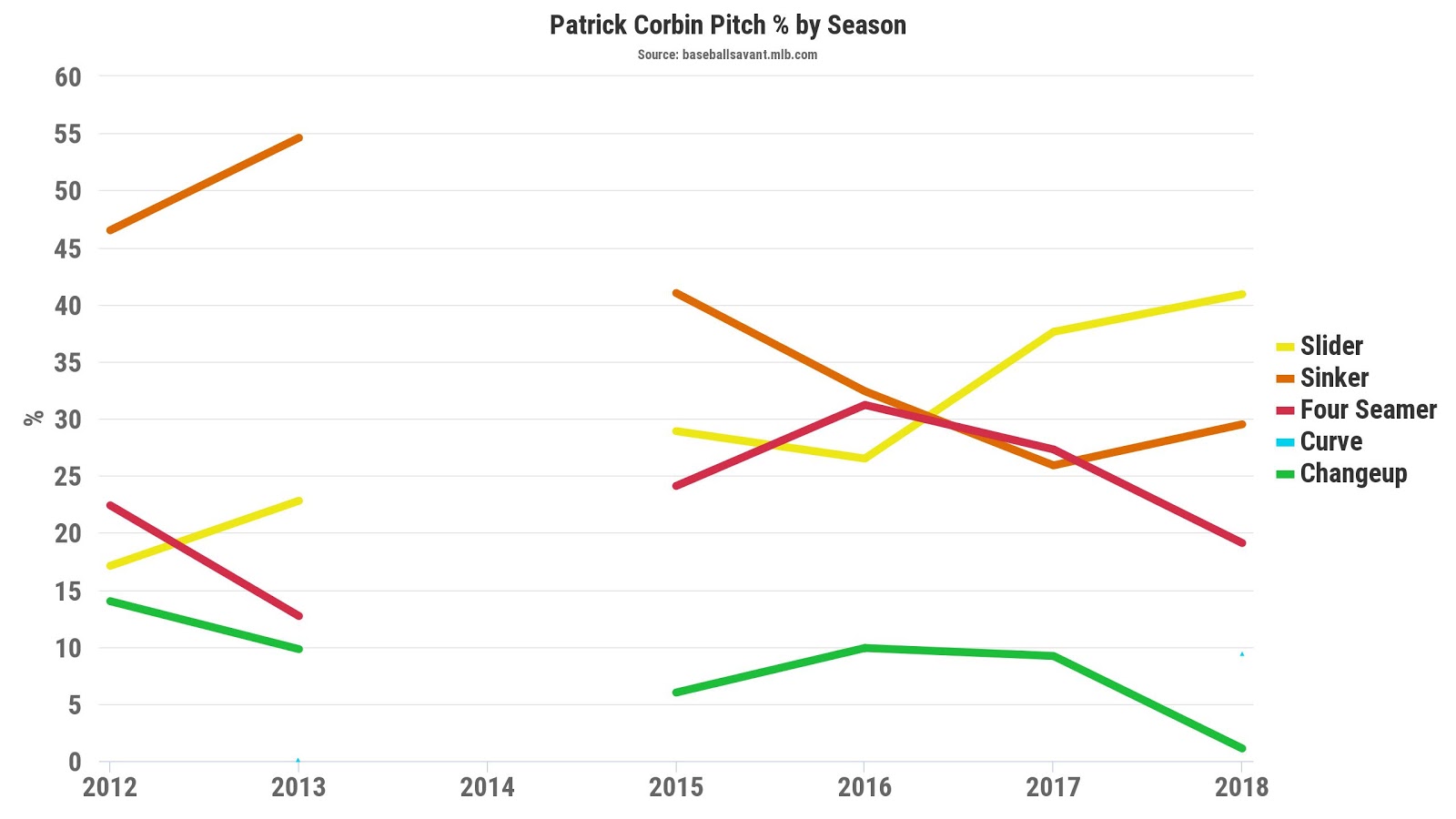 Well, wouldn’t you know? Seems pretty obvious from a player development standpoint as to which pitch you might want the lefty-hurler to throw more. Yet the rest of his pitches aren’t anything necessarily to write home about, and that’s somewhat concerning. Corbin certainly used his sinker more last year as well, but it’s kind of run-of-the-mill.

The sinker definitely generates ground balls (12.17%), but none of Corbin’s pitches leave the park all that often (0.68 HR/9). However, it also kind of stunk. Batters hit .412 BA against it, a .647 slugging, and a .476 WOBA. The four-seamer was a much more effective pitch, but he threw it much less often. Without a solid third pitch, I’m a bit confused about how Corbin made it work exactly.

Still, my confusion aside. He did. He threw his sinker the second most often of his pitches, while the results weren’t great, they matched up with his xBA, xSLG, and xWOBA. Therefore, the results seem sustainable to me. Not sub-three ERA sustainable, but he’ll still be wiping batters out with that slider in 2019.

The 23-year-old Cardinals’ righty got his second taste of the Show last year and was a solid contributor for many dynasty squads. He posted a 3.34 ERA, struck out 10.85 per-nine, and started 28 games, pitching 151 innings. That all sounds like pure dynasty goodness, but the young hurler did this while primarily relying on two pitches: his fastball which averages 93.8 MPH and a devastating slider that generated 39.5% of his Ks. Though he has notorious command issues, he can dial it in when he needs to. Take a peek at this fastball location.

Which helps make this so devisistating (and well located) slider.

Those two pitches work together with great differential in movement and velocity. Flaherty, however, is still figuring out what exactly his third offering is going to be. He increased his usage of his curveball in the later months of the season and it appears that it will be his third pitch. The curve was extremely effective, showing a 50% K-rate. Though we didn’t quite get a large enough sample size to clearly label the pitch as elite, it’s looking pretty damn good. 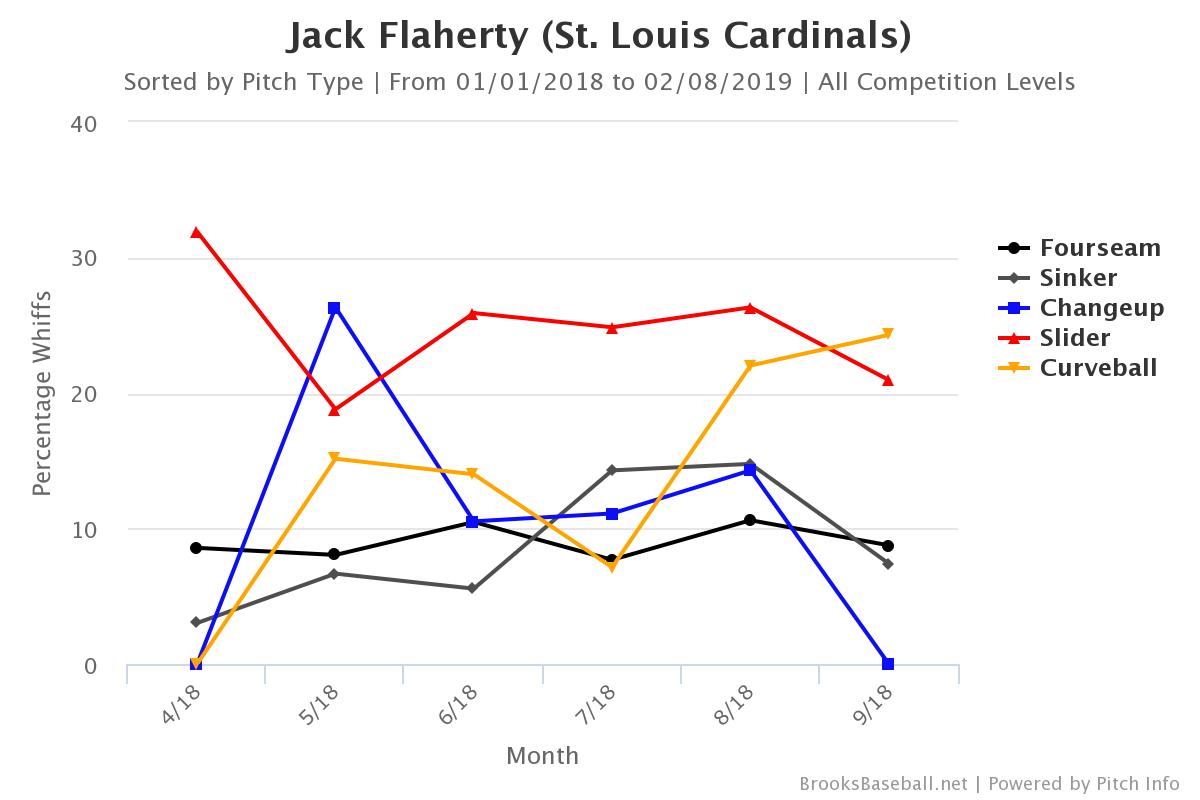 If the curveball even comes close to being as effective as Flaherty’s slider then he will remain a very effective pitcher for a long time. Another note of concern worth mentioning on the young hurler would be his lack of control in the second half, and his tendency to give up the long ball. Both of those factors most likely mean he’s unlikely to get his ERA below 3.00, but instead closer to 4.00.

Unfortunately, the time to buy on the righty has probably passed as there won’t be many doubters out there after his previous season. You’ll need to look for a rough patch during the season to buy, but I would recommend it if you could. He looks like he’s the real deal to me.

Pitchers are already known for their frequency of injuries, but a dirt bike accident? Not the injury you’d expect to put a damper on a frequent Cy-Young contender. Follow that up with a less odd, but still rare broken pitching hand in Spring Training of 2018, and you’ve got a lot of less than ideal performances shrouded in injuries. The question now is whether we need to be buying low on the San Francisco ace, or selling for pennies while we still can. I’m a bit afraid it’s looking a lot like the latter.

Since the dirt bike accident in 2016 Madison Bumgarner has gone on to post an ERA closer to 4 than his usual sub-three. His fastball velocity now sits in the 4th percentile according to Baseball Savant. He’s relied primarily on his fastball and cutter throughout his career, and the fastball is now sitting 91.4 MPH. Bumgarner’s swinging strike rate is down to 9.2% from 12.5%(2015), which is his lowest rate since 2012. However, that’s when his ERA was sitting in the mid-threes, but his strikeout rate was 1.00 K/9 higher then. I’m not all that confident that we’ll being seeing those rates again in 2019.

There’s the possibility that Bumgarner is fully healthy in 2019 and rebounds to his ace like form, but he’s steadily declined enough since the injury that I’m unwilling to take the risk in most leagues. The San Francisco Lefty will need to reestablish his cutter if he has any hope of reclaiming his dominance, as hitters have been tearing the pitch up (10.4% Barrels). All in all, there’s enough evidence here that I recommend selling.

There’s a lot in Archer’s profile that suggests he should be better than he is. For instance, he posted a swing-strike rate of 13.1% last year. That’s a very good rate, and his advanced stats also indicate the pitcher has been the victim of some bad luck

Yet we’re looking at almost two years of bad luck at this point. That’s enough here to suggest that maybe it’s not bad luck at all, and it’s time to dig deeper to find out exactly what’s going on with Archer. The first conclusion I’ve come to is that Archer’s fastball appears to be junk despite it’s excellent velocity. 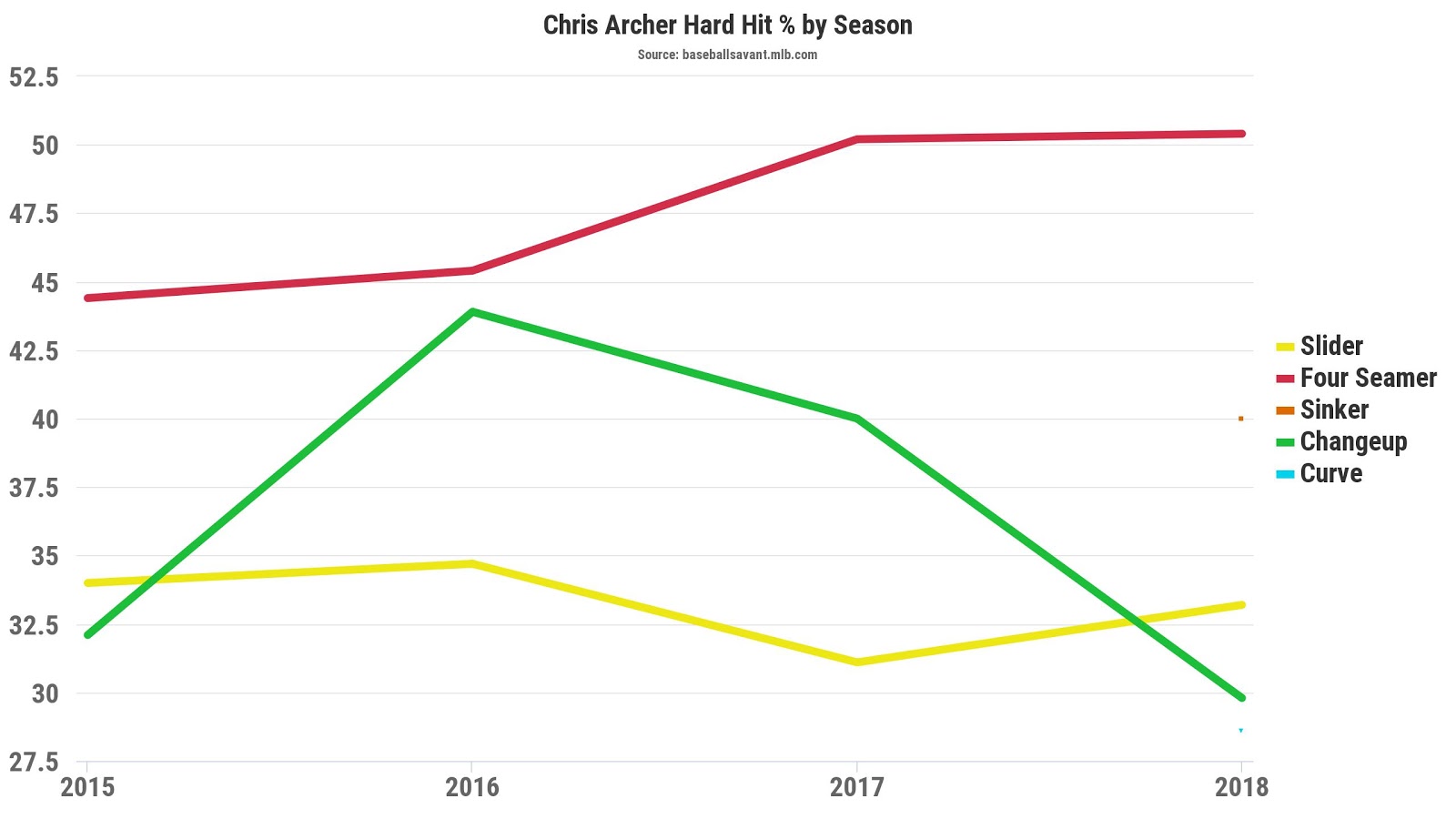 His fastball gets hit hard, contributing to almost 90 MPH exit velocity. Hitters appear to be sitting on the fastball as they’ve also been barreling the pitch at a rate of 9.8%. Archer would appear to be experimenting with changing his pitch mix as he lowered his fastball use by 10% last year, and even started throwing his sinker again. A pitch he has not used in some years.

Once the Pirates acquired Archer they experimented with his pitch mix, bringing back the sinker, and decreasing the use of his fastball. 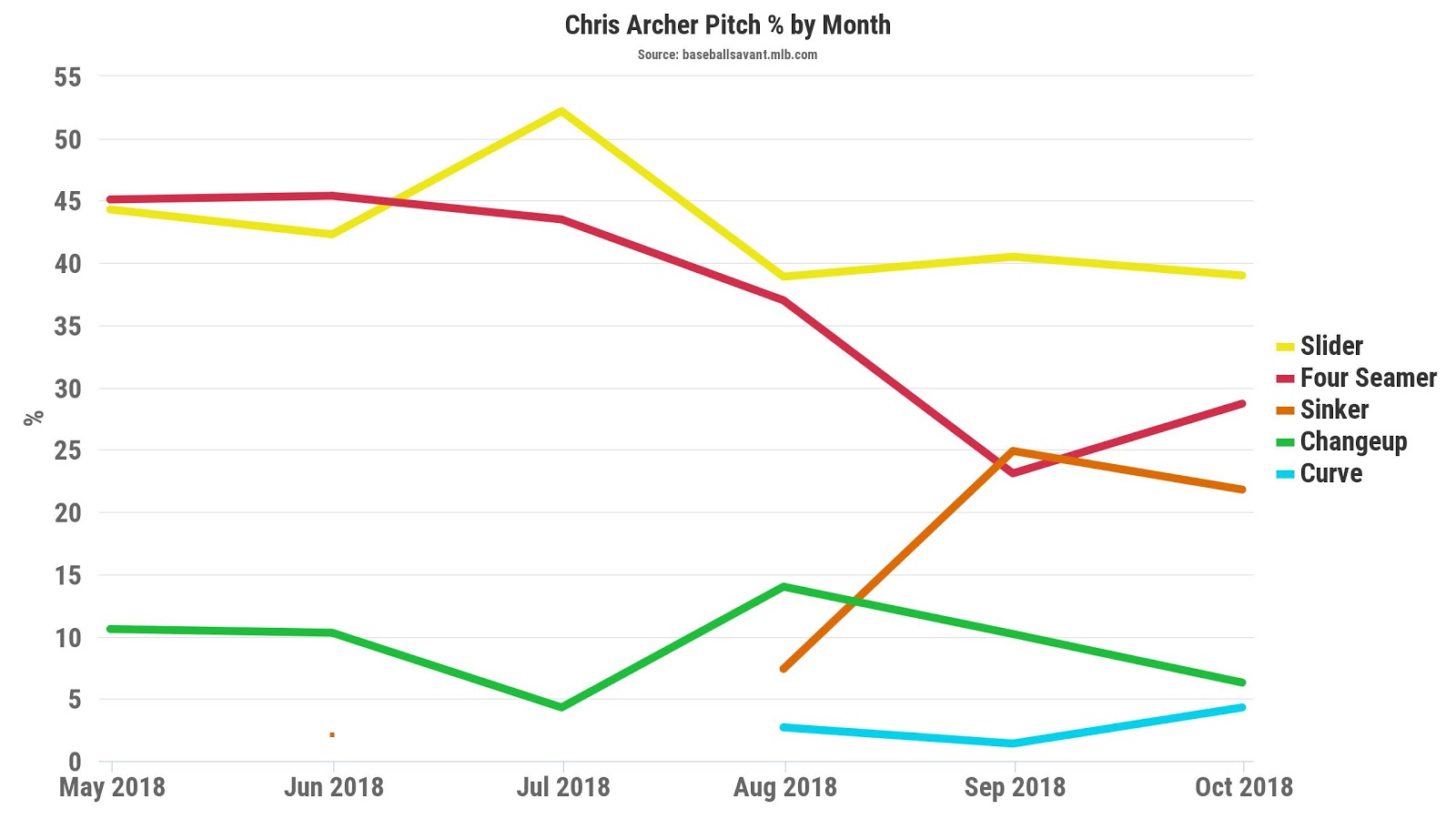 The initial results were not all the promising, as Archer posted a 6.45 ERA during his first month with his new club. However things changed and in September/October when he posted a 2.70 ERA, dropped his wOBA from .386 to .290, and using his sinker less.

Despite the change, I can’t get onboard with projections of Archer with an ERA under four. He’s got plenty of swing-and-miss with his slider, but his fastball just looks like high-velocity garbage. The change-up doesn’t appear to be effective enough either. The strong swinging-strike rate indicates that he should have lower ratios, but I think it’s an illusion. Dynasty owners will be buying low on the former promised ace, I’d suggest selling. Perhaps the Pirates can fix him, but there just isn’t enough evidence yet.

Ray had an awfully large fall from grace in 2018, after what was a very promising and impressive 2017. A quick look at his more advanced metrics told you that he wasn’t going to live up to the same level of dominance. So for those of you who sold high on the Diamondbacks’ lefty in 2017, well, good on you. However, I believe that Ray is at the point now where he is actually worth acquiring again.

The 27 year-old lefty has always had some control issues, but walking 5.09 per-nine? That’s real bad, even for Ray. His wildness stemmed from his inability to locate his fastball in the strike zone at the same level as 2017.  He went from throwing it in the zone 55.3% of the time to 51.5% of the time. The pitch itself was comparable to his curveball producing a 16.6% walk-rate.

That fastball was also beat up, as it gave up a .356 WOBA to opposing batters who crushed it at an average of 90.1 MPH. However, a key difference here between Archer and Ray is that Ray’s fastball isn’t complete rubbish. Number one produces much more spin, and a K% that is significantly higher than Archer’s. Thus we don’t need too much of an adjustment from Ray to see more success in 2019. There’s more hope here for certain.

One final note on Ray is that batters appeared to get a bit lucky on his curve. Not a bad pitch by any means, but it looks like it can be even more effective.

With some better luck on his curve, throwing his fastball in the zone more, and cutting down just a bit on the free passes (let’s say 4.00 per-nine) Ray could present a value in dynasty leagues. Still only 27 years old, the lefty will generate a ton of strikeouts and should post a serviceable ERA. While we won’t get the results of 2017 Ray, that’s ok. He’s a great SP3. Lower your expectations from 2017, but 2018 looks like his floor.