Throughout this four–part aging series, my editor has begged me to get my head out of the clouds in considering aging, asking me to move beyond a research mindset to make some actual, tangible predictions that can help readers win their fantasy leagues in 2019 and beyond. I’ve finally given in to the pressure: it’s time to put some “skin in the game,” to “walk the walk,” to give some actionable recommendations derived from the knowledge unveiled in this research. My predictions are based on two inputs (plus my biases and fallible wisdom): the first input is Delta Method findings (see part two) for an average player’s aging tendencies; the second input is data on how particular players grow throughout their careers (see part three for an example subset of 19-year-olds who played in the majors). Accounting for how particular players grow allows me to make reasonably precise predictions for similar players (similar in age and performance). Good players tend to grow less, percentage-wise, than bad players; it’s important to take this into account in formulating predictions. Here goes nothing: five hopefully-not-too-boring predictions I’d bet on in my own fantasy leagues:

Bold(ed) and italicized aging-related predictions (because being bold is no longer enough):

1) Rafael Devers and Gleyber Torres both drive their strikeout rates under 21% and isolated powers over .250, becoming consensus top 25 hitters entering 2021.

Urias had a .146 isolated power in a small MLB sample in 2018, backed by strong exit velocities. His true talent last year was probably more around .130, near his major league equivalent isolated power for his Triple-A performance (taken from claydavenport.com). Urias’ THE BAT projection is the most optimistic on his isolated power this year, projecting .128, so this feels suitably bold—yet supported by isolated power aging curves for similar 21-year-old performances.

Mondesi’s major league equivalencies and simple regression to the mean suggest Mondesi’s true talent level was likelier closer to 4 or 5% last year (his actual walk rate was 3.8%). At 20, Rougned Odor walked 4% of the time. Last year at 24, he doubled his rookie year walk-rate, hitting 8.1%. Walk rate grows faster and longer than any other statistic, so it’s reasonable to expect growth from Mondesi as he ages. Many people are expecting Mondesi to get chewed up and spit out this year because of poor plate discipline, but I think his discipline (and defense) are passable enough to keep him in the line-up in 2019 and beyond, so he can post a truckload of stolen bases and a medium-sized U-Haul-load of home runs.

4) Isaac Paredes’ will either be a consensus Top 50 prospect or a Major Leaguer by midseason.

Paredes’ major league equivalent isolated power was .157 across three levels last year (High-A, Double-A, and the Mexican Pacific League). Remarkably, he’s only 20 this year. He gets criticism for being “bad-bodied,” and for defensive issues. Notwithstanding, he has an elite performance record at a very young age, elite discipline and rapidly developing power. I think he’ll make the Tigers in 2019 and hit for a solid average and slightly above average power right away. I also suspect he’ll be a consensus top-50 prospect by mid-season—unless he makes the Tigers before then. He looks like a future offensive star, a guy who’ll hit for power and average, i.e., fantasy dynamite.

I do expect some gains for Buxton and Moncada in the next few years, but not enough to justify their current hype—in both redraft and dynasty leagues. According to National Fantasy Baseball Championship data after March 1st, Buxton’s average draft position is 96th hitter, Moncada’s is 97th. Fangraphs auction calculator (standard settings, depth charts projections) has Buxton as the 184th best hitter in 2019, and Moncada as the 142nd best. It’s in some sense not at all bold to merely project Buxton and Moncada to hit their depth charts projection this year, but these aren’t just bold predictions–they’re bold and italicized. Unlike for bold predictions, norms governing bold and italicized predictions have not yet been formulated — all is chaos in predictions bold and italicized. Further, in my experience in dynasty leagues, Buxton and Moncada are still valued as if 2018 never happened—this doesn’t feel justified. Aging research consistently finds most wOBA gains happen before 24, with only moderate gains afterward. Moncada is 24 this year, Buxton is 25. Their stars have dimmed a bit since 2016. I think both will grow into solid players, but not stars.

I got some good feedback from different aging experts on the earlier articles in this series; one suggestion was my results might change if I ignored the steroid era and only captured post-2003 data. Accordingly, I re-ran the delta method corrected for selection bias on 2004-2018 data. The results are below. Peak age dropped slightly post-2003, from 29 to 26. There was still a plateau between 26 and 29, with little wOBA change in this range. Every indication I’ve got from this research suggests peak performance is a range rather than a single age – likely between 26 and 29. Further, the biggest gains for all statistics happen before 24. Peak overall growth was very similar for all eight statistics in both time periods, e.g., peak wOBA grew 24.6% over age 19 wOBA for the 1985-2018 sample, and 24.2% for the 2004-2018 sample. Growth was a bit more concentrated at younger ages in the 2004-2018 sample. Note that even though there were only five 19-year-olds in the post-2004 sample, their growth closely aligns with growth for 19-year-olds from 1955-2003 (see part three for these findings). I’m thus confident in their accuracy.

The following table mimics the main findings in part two, displaying corrected delta method performance change at each age over the previous year. 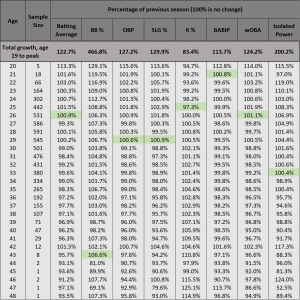