LATEST
Dynasty BaseballDynasty DynamicsWhat To Do About...

This time around we’re going to be looking at some third basemen! 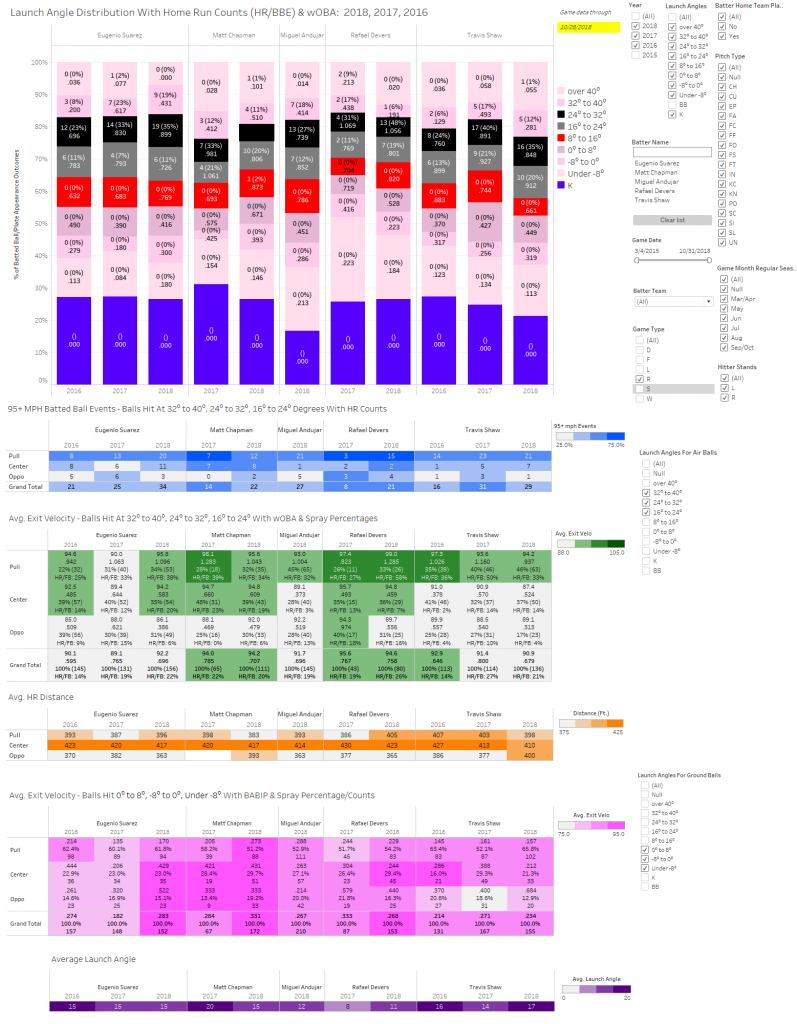 SEPARATING THE BEST OF THE REST

Here at The Dynasty Guru, we had one of the lengthiest debates this offseason while trying to place the second tier of third basemen. After Jose Ramirez, Alex Bregman, Nolan Arenado, Kris Bryant, Vladimir Guerrero Jr. and Anthony Rendon, we had a glut of similar players to deal with. I’m going to attempt to break apart that tier so you can pick your favorites. There are subtle differences, so let’s find them.

Eugenio Suarez has been undergoing a transformation since the middle of 2017. Sometime after the All-Star break that season, he started attacking the ball out in front of the plate and pulling the ball upwards of 35% of the time in the air. While he was making this change in the second half of the season, he wasn’t yet making consistent hard contact on the balls he was putting in the air, as he had been in the past. Overall, it looked like he had depressed fly ball exit velocity 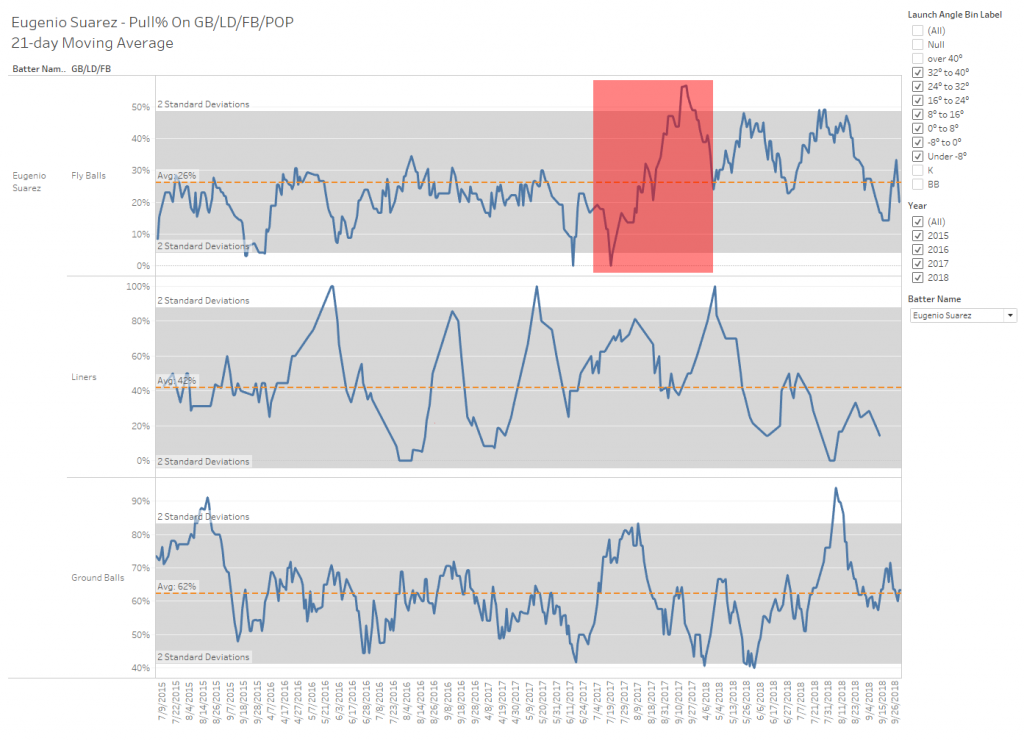 While I know looking at halves of seasons is a somewhat arbitrary cut-off, it will help illustrate how Suarez retooled in order to get more balls in the air to the pull-side, while at the same time working on how to keep hitting them as consistently hard as he had in previous seasons. You can see that he was also sacrificing power on balls hit to center field as he was initiating the batted ball makeover.

What I noticed in my analysis about Suarez after the 2017 season was he should have been an easy candidate for positive regression on his center field batted balls if you look at data through the lens of a control chart rather than overall statistics. Often times there is too much emphasis put on macro numbers rather than time put into understanding the changes. That is precisely what happened in 2018; he carried over the pull-field approach in the air, while regaining the consistency on the top end exit velocity (and thus average exit velocity). 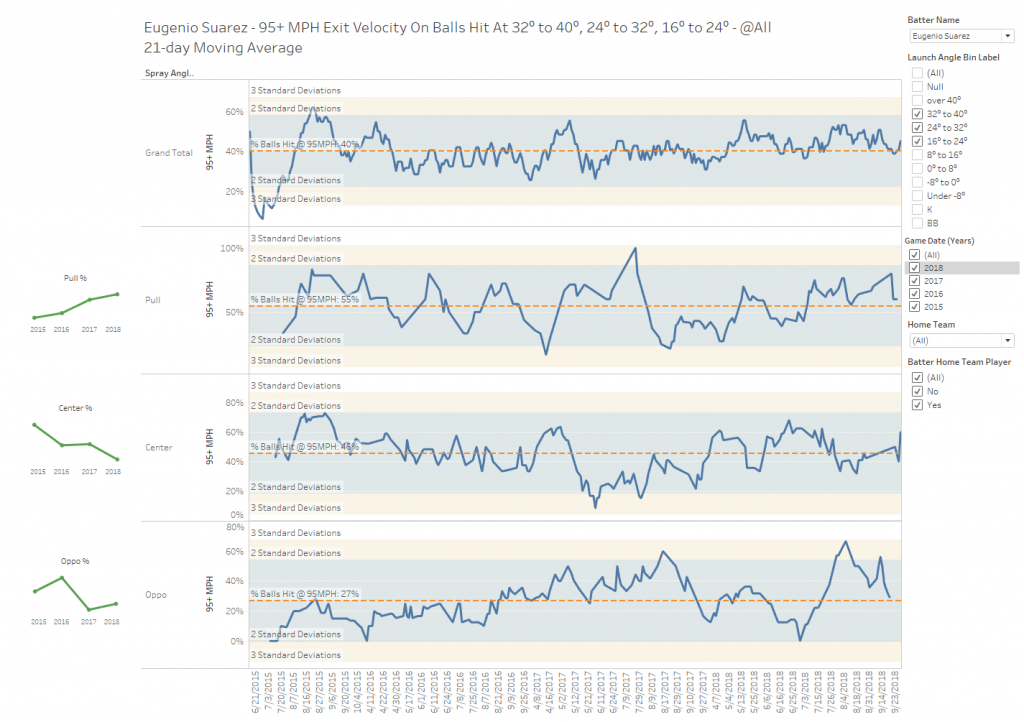 To calm one last fear on Suarez, I want to make a note on his elevated average and BABIP last year. Suarez had one other elevated BABIP season, in 2015, however that was driven by an outlier season on groundball BABIP. Over the past two seasons, Suarez has become an above-average line drive hitter, moving from 21% (2015-2016) to 24% (2017-2018). For this reason, most of the projection systems are going to miss his easy .270-.275 floor on his batting average. Not only is he hitting more liners, he’s hitting them harder – up from 88mph in 2016 to 95mph in 2018. To top it off, he’s hitting them to better spots as well – back up the middle 58% of the time last year. Take a look at the BABIP difference on pulling line drives versus hitting them up the middle.

The cherry on top of the Suarez sundae. I’m also going to note he was hitting his groundballs 6mph harder last year as well.  For all these reasons, I lobbied pretty hard for Suarez to sit atop the next tier of dynasty third basemen. You should buy, draft or trade for Suarez without hesitation if you don’t have one of the elite youngsters at the position.

“Three years from now we could be writing the ‘It’s Probably Time To Give Up On Rafael Devers article.”

I’m really hoping this is not the case, but I see quite a bit of Maikel Franco in Rafael Devers and that scares me. As you can see below, Devers currently puts balls in play at approximately identical launch angles to Franco. The main difference between the two is that Devers hits the ball harder to center and the opposite field in the air. It’s what keeps his wOBA significantly higher in the 24-32° launch angle bin.

What we’d like to see is continued growth in his batted balls and to have him turn into something that looks more like JD Martinez, right? Martinez puts an extra 10% of his batted balls in play at the best wOBA launch angles (8-32°). This is how Devers needs to improve. 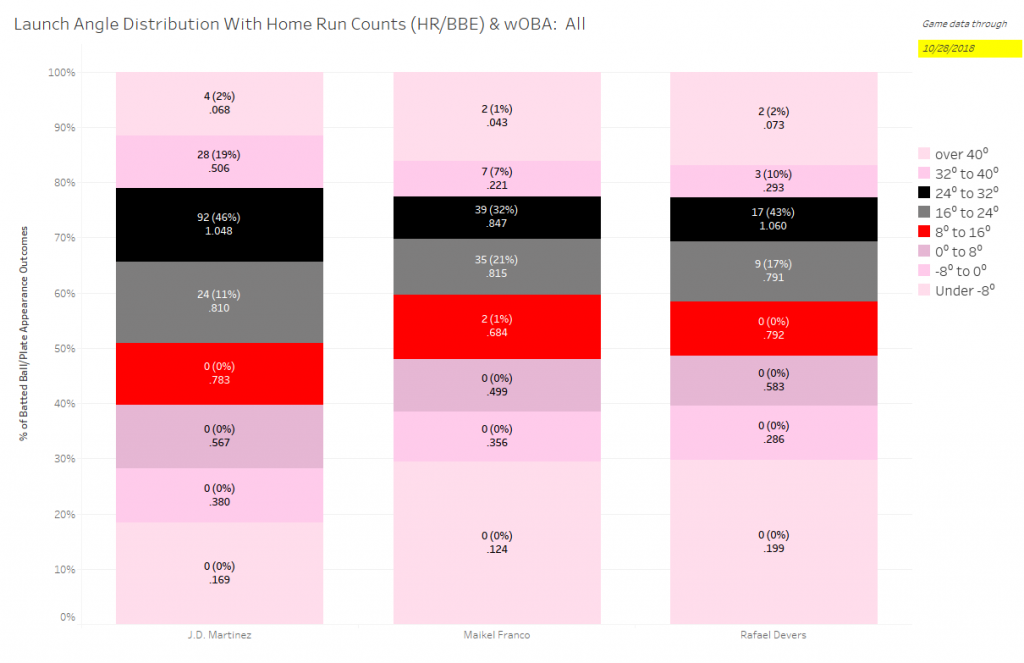 Another way to do this visually is to plot a time series of the red, black and grey boxes, where a player’s wOBA is maximized. This will be the way I monitor any in-season improvements from batters I’m tracking – including Devers. 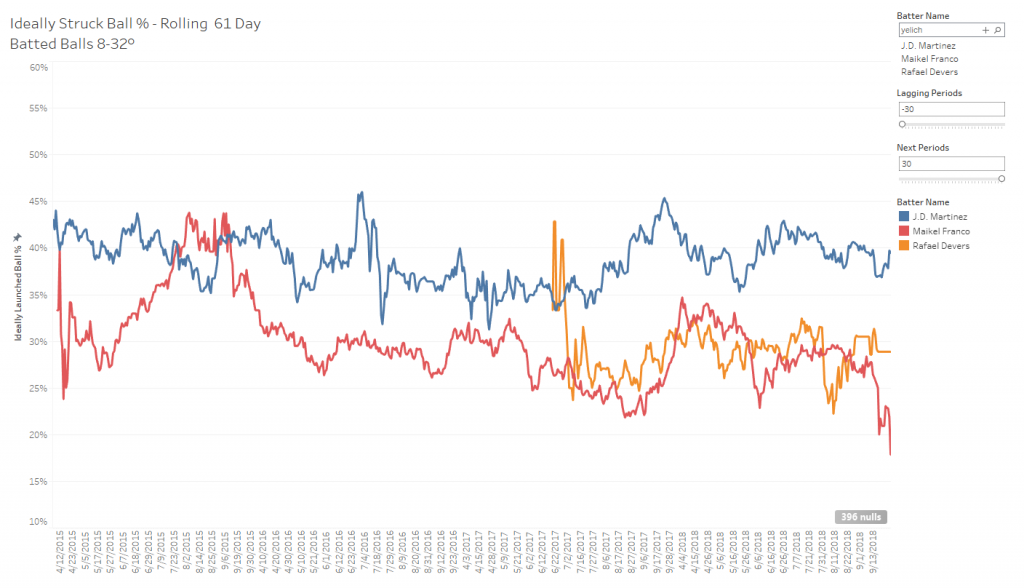 Ideally what we’re hoping to see in 2019 from Devers is what we saw from his teammate, Xander Bogaerts, below, in 2018. With this hope in Devers for change, I’ve left him as my #9 dynasty third basemen just behind Javier Baez, Eugenio Suarez, and Kris Bryant. 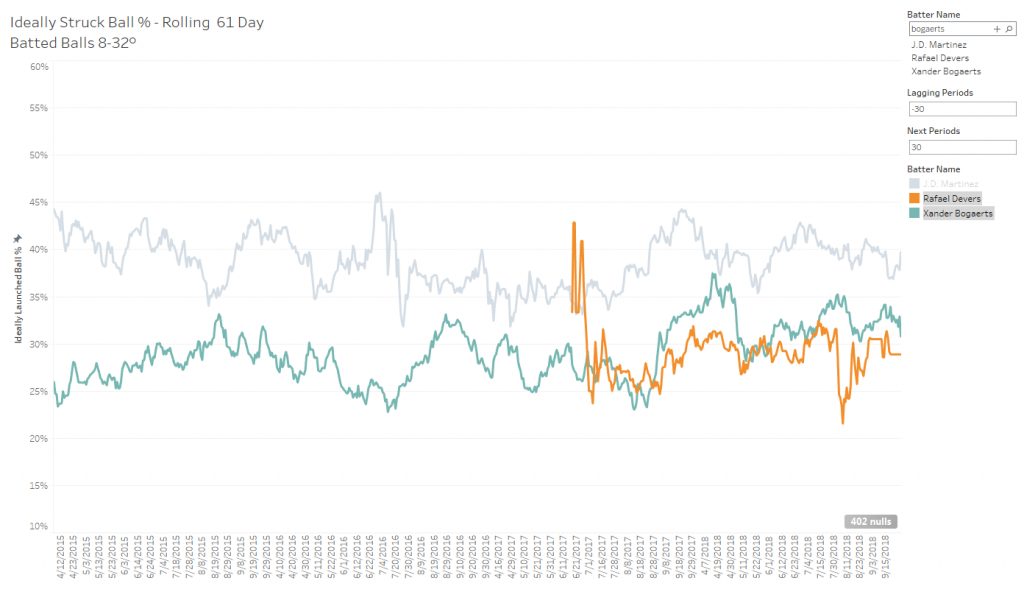 I’ll be honest, I don’t really know what to make of Matt Chapman. Those who love Matt Chapman will tell me he’s growing into his raw power; however, much like Devers he needs to begin hitting more balls at ideal launch angles and/or cutting down on his strikeouts to put more balls in play. With a projected 45-50 hit tool, Chapman is going to live and die by the distribution of balls he puts in play and his quality of contact, especially in the counting categories. 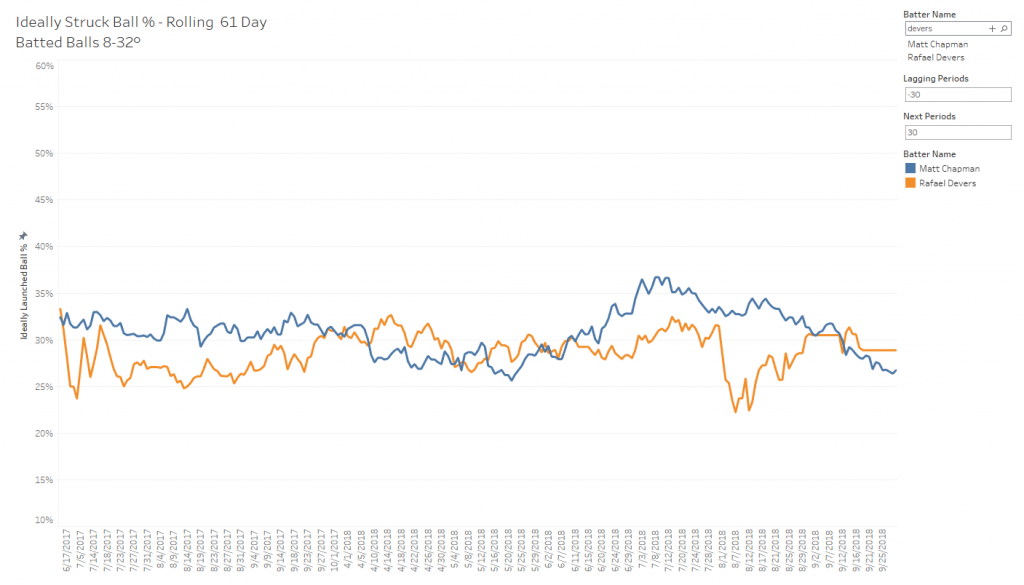 Chapman did produce slightly more ideally launched balls than Devers in 2018, however much like Suarez, he’s not quite as powerful as Devers- thus the similar HR totals.

Thus far, Chapman has homered on a similar percentage of fly balls to centerfield as Rafael Devers and has produced a much higher wOBA thanks to hitting more doubles. This is one of the areas that keeps me hopeful that this duo is still very similar despite the fact that they’re each taking different paths toward the same type of dynasty value.

THE MAYOR OF DING DONG CITY

As you may know, I’m a rabid Brewers fan and I was surprised to learn that Travis Shaw hit 30+ HR again last year, seemingly right under my nose and off my radar. This appears to be because much like the Brewers team in total, Travis Shaw got stronger as the year went on.

Let’s flashback for a moment. You might remember Shaw’s all downhill 2016. Spectacular 1st half followed by a letdown in the second half. Then there was his 2017 where yet again, he built to a crescendo by All-Star break, only to fall off that cliff as he rode out the remainder of the season. In 2018 we weren’t sure what to expect. Was Shaw going to regress? Well as I already told you, he only got better as the season went along. This chart summarizes these three very different seasons beautifully. 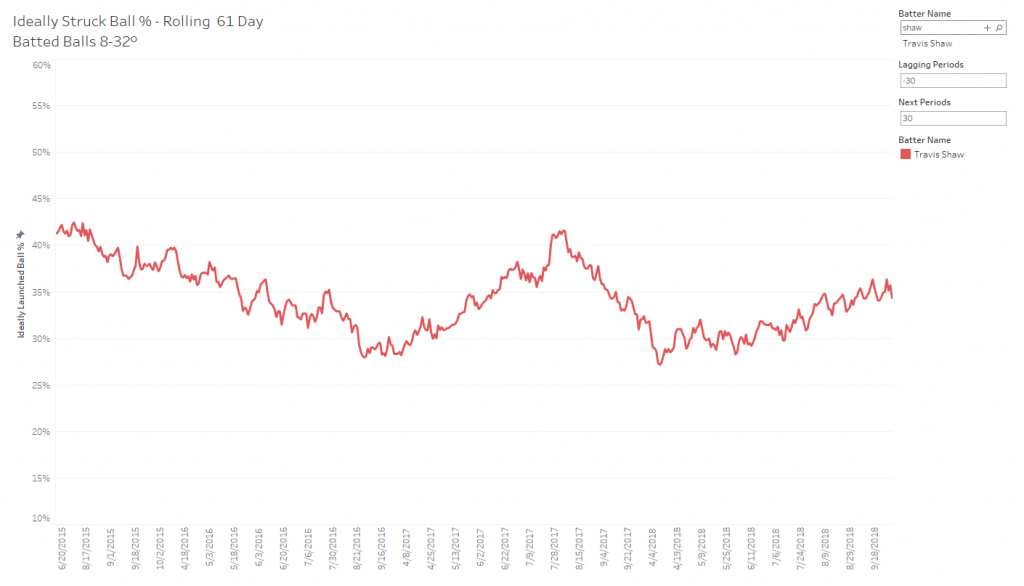 Two other spots shone brightly for the Mayor last year. One is that he increased his walk rate substantially, however it looks like he may have been reaching outlier levels by the end of the season, so we can likely expect some of that to regress. Second, he cut his strikeout out rate for the third season in a row, which is a beautiful thing and allows him to put more batted balls on play. Shaw will get you quite a bit of what Suarez will get you, but with a depressed AVG/OBP. 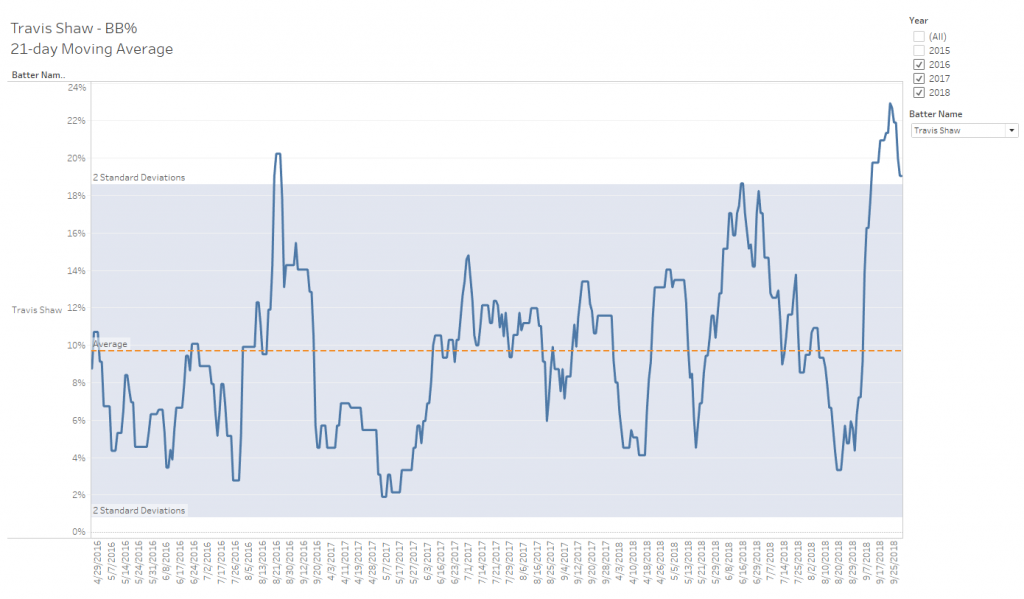 WHO’S THIS MIGUEL ANDUJAR AND WHY SHOULD I CARE?

Andujar begins to round out our tier of young players who will still get playing time over the next 5 years before we get into the tier of high-end up-and-comers like Riley, Gorman, India, and Bohm. Andujar arrived on the scene last year at 23 years old and did a pretty impressive thing with the Yankees. He was able to come up and immediately replicate his impressive minor league strikeout rate (~14-16%) while only walking in 4.1% of his at-bats.  While the latter isn’t impressive, it does hold value in roto fantasy leagues that value more counting stats like Total Bases and Home Runs. The fewer plate appearances wasted on walks and strikeouts the better in classic 5×5 leagues.

So what do we know about Andjuar? We know right now he’s hit a significant number of his dingers to the pull field, though he did manage to go oppo-ya-ya 5 times last year, which was impressive for a 23-year-old. He also puts a high number of his batted balls in play at those ideal launch angles. I’ll leave you with that visual and tell you that I get a little higher on him each time I look at his data. 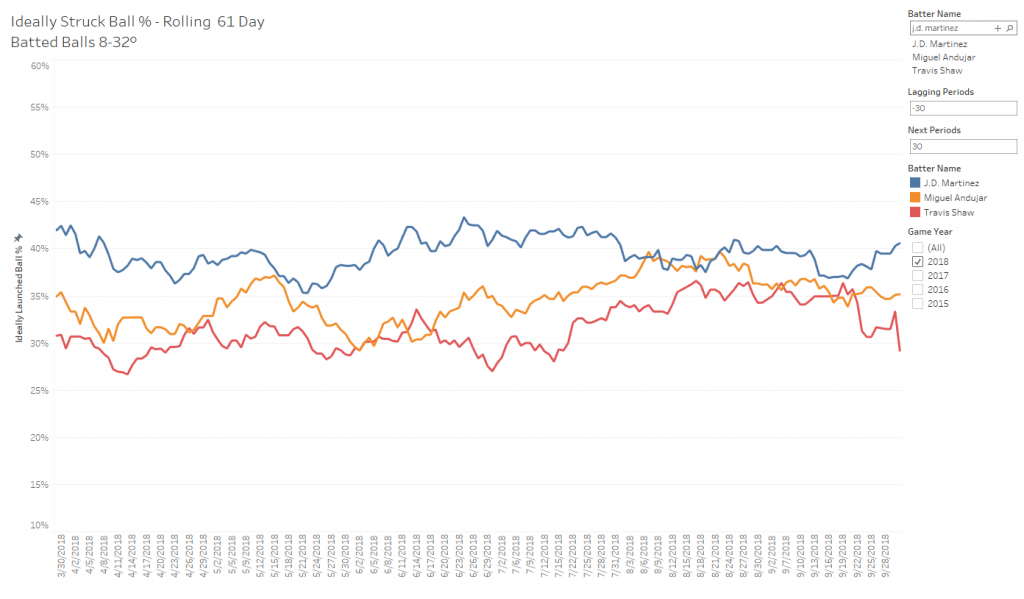 See you again soon when I’ll be back to discuss shortstops! 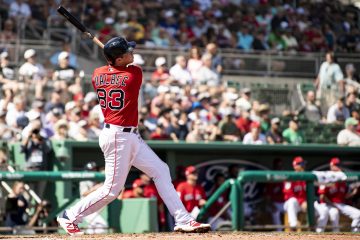 TDG Roundtable: Players Who Would Benefit From A Trade