This time around we’re going to be looking at some catchers!

But first, a brief refresher on my Dashboard.

In the second chart, we’ll look at the percentage of balls hit 95mph or harder between 16-40°. This gives us an idea of a grade for over-the-fence home run power, as well as how many home runs came from those batted balls separated by Pull/Center/Oppo. You can also think of it as strongly correlated to Barrel% for flyballs. For those of you that enjoy talking about average exit velocity, the green chart just below that is the same look as the previous chart, except that it shows the average exit velocity, weighted on-base average (wOBA) along with the count and percentage of those fly balls that were hit to each field.

The last three graphs detail average home run distance (often cited on the Dynasty’s Child podcast by Patrick), Batting Average On Balls In Play (BABIP) specifically for ground balls and finally the purple shaded chart is average launch angle. I’d encourage you to click on the graphic below and then right-click on the image and open it in a separate tab so that you can zoom, or even better, access the dashboard directly. 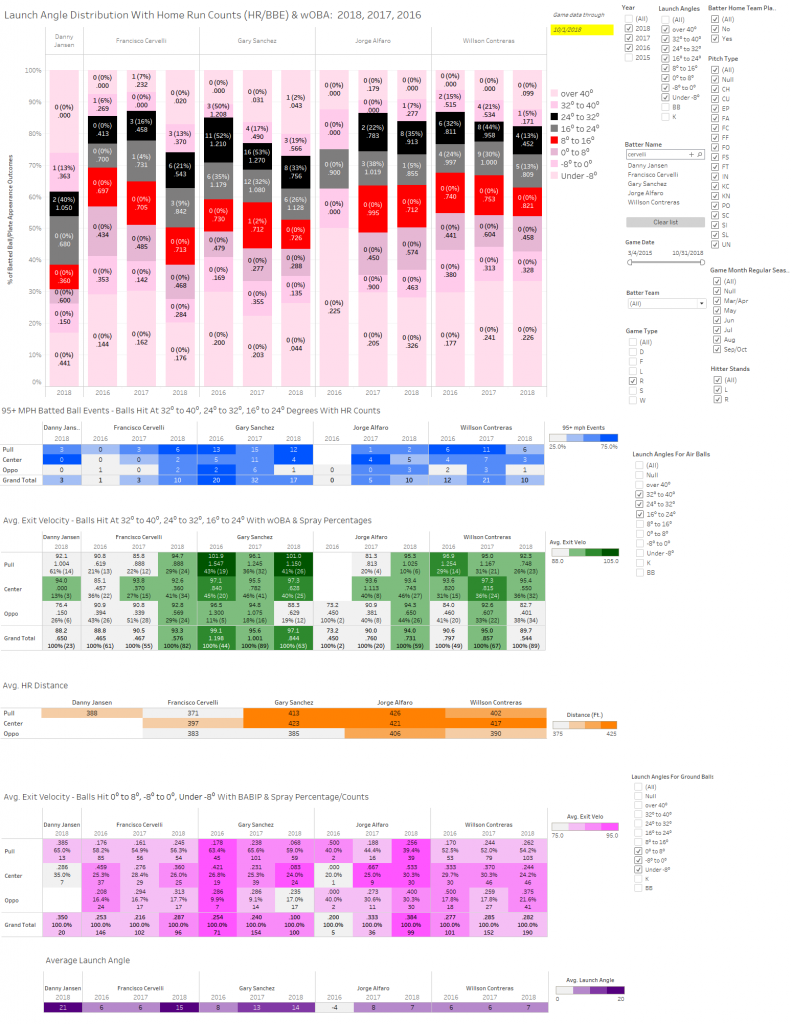 Out With The Old – Francisco Cervelli

Let’s start with the batted ball changes Francisco Cervelli made last year in his age-32 season. From the first char,t I can quickly see that Cervelli was certainly aiming higher and made purposeful launch angle or attack point changes. It wasn’t all good though. You can see the percentage of balls he hit over 40° drove a majority of his increase in average launch angle – that’s not what you want to do. However, this was accompanied with hitting the ball harder to all fields which I can see in the second (blue) chart.

In the previous two seasons, when Cervelli pulled the ball in the air he only connected with good, hard contact (95mph+) 45% of the time. In 2018 he moved that up to 75%. This pushed his HR/BBE (Batted Ball Event) up to 21% on balls launched at 24-32° despite not hitting a significantly larger percentage of his balls at these launch angles. The same holds true for the higher launch balls from 32-40°, in which Cervelli was previously unable to homer due to his lower exit velocities on this batted ball type. Yet in 2018, Cervelli homered on 13% of these batted balls. 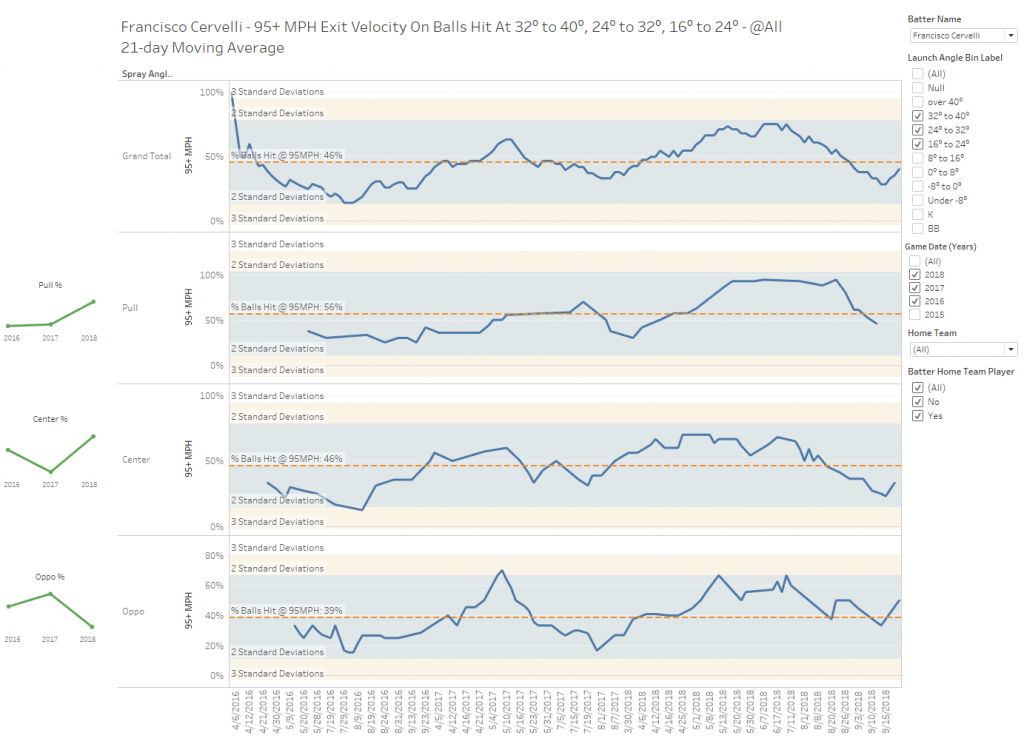 This dashboard shows the rolling 21-game moving average (95+ mph) for balls hit in the air between 16-40°. You can see Cervelli dramatically increased his skill in driving the ball in the air, surpassing the 90% threshold for most of the season. In coordination with hitting it hard more frequently he dramatically increased his use of the pull field as well as centerfield last year.

All this being said, Cervelli doesn’t really do much damage in terms of wOBA in those flyball bins. He didn’t really increase the amount of doubles he hit and nearly all his SLG% gains were from the extra home runs. Therefore, I’m not very bullish on the 32 year old backstop. I was the second lowest man on him in the consensus ranking here at The Dynasty Guru, slotting him 30th,  and stand by that ranking.

In With The New – Danny Jansen

Danny Jansen had a very small cup of coffee for the Jays in 2018, so we’ll have to take all of his batted ball data with a grain of salt. In this small sample size, we can see that Jansen was hitting under the ball quite frequently, leading to a bunch of lazy flyball outs and not very many line drives. He did, however; show that he could hit the ball in the air with some authority. He hit 40% of his ideally launched flyballs at +95 MPH, which lead to a nice HR/FB rate on those balls (even if it was drown out by all the 40°+ flyballs).

As Jansen comes into 2019 he’s the sixth-ranked asset at the position, and for good reason. Jansen maintained an above average line drive rate in the minor leagues (~22%) which allows him to create a nice floor on his batting average while also posting double digit walk rates. Jansen also hits enough flyballs (35%+) with enough exit velocity to push him near the 50-grade for game power. This is something we’ll be better able to monitor throughout 2019 as he accumulates more batted balls. It’ll be important to keep an eye on three key metrics: 1) how frequently he’s hitting the ball between 16-40°, 2) how frequently he’s hitting those balls hard, and 3) how often he’s pulling the ball in the air. I like him to become a slightly less-powerful Willson Contreras. There is a chance their home run totals are somewhat similar, however, because Contreras likes to hit the ball down into the ground a majority of the time.

Succinctly put, Willson Contreras suffered from a complete collapse in pulling the ball in the air with any authority, while at the same time pulling the ball less than ever. Take a look with your own eyes! 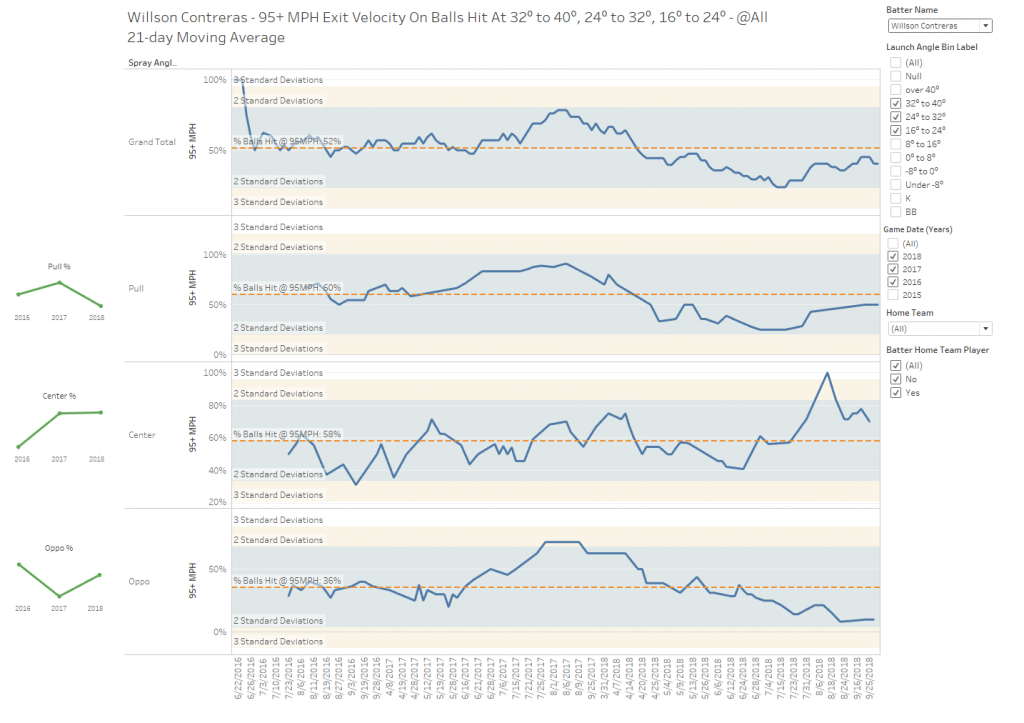 It was well documented that former Cubs hitting coach Chili Davis didn’t mesh with many of the Cubs top hitters, and perhaps he was tinkering with Contreras’ approach. Whatever the case, I wouldn’t expect Contreras to stay down in 2019. I do think that most of Contreras’ value comes from playing in a large amount of games for the Cubs. A 110-game Willson Contreras with his batted ball profile would become significantly less valuable. He is by far and away a compiler, which is great because he played 138 games last year. What Contreras is, specifically, is a mediocre line-drive hitting backstop with the ability to hit the ball over the wall and into the gaps when he’s able to attack the ball and elevate. I don’t see him changing the approach he’s established and he’s likely to come back to being an 20-25 HR catcher with a batting average that doesn’t hurt you. There’s just isn’t a lot more ceiling here, he’s not going to suddenly become Gary Sanchez in the homer department.

Three things happened to Gary Sanchez last year. First, his batted ball profile collapsed. Instead of crushing 40% of his batted balls between 8 and 40 degrees, that dropped to 35%. Second, he was a victim of groundball BABIP – seeing it drop from .244 to an even .100. Lastly, when he hit the ball hard in the air to center and rightfield he homered much less frequently – down to 14% in 2018 from 30% in 2016-2017.

That leaves us with some easy takeaways for you to determine how you want to hedge your Sanchez bets. His groundball BABIP stole almost 40 points off his average while his collapsed line drive rate cost him another 25. I’m doubtful he’ll repeat either negative metric and he’s still my #1 dynasty league catcher and should be yours as well. His power is unmatched and I’m confident when I tell you not to worry about the batting average issue from 2018.

Last But Not Least – Jorge Alfaro

I’ll admit it, I’m enamored with Alfaro. Behind the scenes here at The Dynasty Guru I’m known for my strong affinity for flawed powerful hitters. Be it Maikel Franco, Yasiel Puig or Miguel Sano. Jorge Alfaro is no exception to my problem. Alfaro has tremendous power to all fields and showed overall improvements in his ability to hit all batted balls harder in 2018. His “problem,” aside from contact, is that he only pulls the ball 10% of the time in the air. If you’re going to measure one metric for Alfaro in 2019 keep an eye on how frequently he’s pulling flyballs. His wOBA on pulled balls in the air was 1.025 last year, whereas it was .743 to center and .650 to the opposite field. If he can put 30 balls in the air to the pull side he’s a 15-20 HR catcher instead of 10-12.