Before the season, we had a vigorous rankings debate at the catcher position. The discussion: where should we rank J.T. Realmuto, Salvador Perez and Francisco Mejia? On top of that, our consensus rankings ranked Austin Barnes at #8, ahead of productive players like Wilson Ramos, Welington Castillo (when not suspended), and the top two players at the position this year, Evan Gattis and Yasmani Grandal. A lot of us, myself included, fell for the shiny objects of Mejia and Barnes. We were wrong.

Why were we wrong? I think there are three lessons for dynasty owners:

Francisco Mejia and Austin Barnes had one key problem entering 2018: it wasn’t clear where they were going to get playing time. Mejia had established major leaguers Roberto Perez and Yan Gomes ahead of him in Cleveland. Barnes had fellow top catcher Yasmani Grandal to deal with. We all assumed that they would crack the roster and gain playing time, but we were wrong.

Playing time, especially at the catcher position, is everything. For proof of that concept, look no further than our topped ranked catcher heading into this season, Gary Sanchez. By pretty much any reasonable standard, Sanchez is in the middle of a disaster season. He’s hitting .190/.291/.430 in 2018. However, he’s still a competitive catcher according to ESPN’s Player Rater, which ranks Sanchez #7. Sanchez has been helped by a pretty rock solid place in the Yankee lineup, both in terms of games started and lineup position, and has thus been able to pull together 35 RBI, 33 runs, and 12 home runs. Sanchez owners clearly aren’t happy with his performance, but they aren’t forced to dive into the waiver wire either.

Next year, I plan on prioritizing playing time over upside in my rankings. Goodbye Austin Barnes, hello Tucker Barnhart and his boring friends. Promising players with a major threat to their playing time, like Barnes has with Grandal, are getting knocked down more than they would on a team that gives them a clear path to a daily lineup spot.

Austin Barnes had one heck of a 2017 second half. He hit .289/.408/.486 in 262 plate appearances and managed to edge out a slumping Grandal by the end of the season. However, that ability was too good to be true. Barnes was 28 years old. He had a pretty consistent track record of a high-OBP with decent power in the minor leagues, but major league teams had repeatedly refused to promote him and give him serious playing time. They saw something we didn’t.

Francisco Mejia had much more of a pedigree than Barnes, but much worse on-field results. While he hit well enough (.304/.349/.479 in 2017), he didn’t blow anyone away. Defensively, he clearly wasn’t ready for the major leagues. Any projection of Mejia required two things to improve in order for him to be productive: mostly defense, but also some offensive skills. The probability of both going right at the same time is lower than either individually. He was a bad bet.

Next year, for players like Mejia and Barnes, I want to see the complete package: pedigree, track record, and minimum defensive skills. Partial/mediocre track records from guys like Mitch Garver and Jorge Alfaro won’t do.

Lesson #3: Shooting for the Moon is Overrated

I’m sure that I’m not the only fantasy owner to make some version of this argument at the catcher position:

This was a bad argument. In one dynasty points league, I followed its logic and went with Austin Barnes as my starting, and only, catcher. Barnes has been worth a grand total of 77 points to date, 34th best in baseball. After getting hammered at the position for a month, I picked up the best available replacement player in my 24-team league: Martin Maldonado, who has been worth a grand total of 117 points. Other boring players who were available on waivers this winter: James McCann (142 points), Chris Iannetta (131 points) and John Hicks (138 points). Over the course of a full season, counting the wasted roster spot I had while figuring out of Barnes was going to be good or not, I’m going to be in a 50-ish deficit versus the counterfactual. Not good.

Of course, it would be great to have both the insurance policy and the moonshot. In my particular league, I didn’t have that choice. I had to blow all of my offseason FAAB to acquire Barnes, therefore blocking off any opportunity to invest in a backup option.

Next year, I’m not shooting for the moon without a parachute. 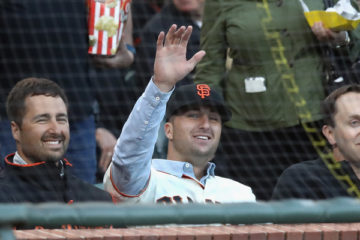