In my time writing about fantasy baseball, I have found that one of the more exciting topics can be post-hype prospects. Part of my year-to-year evaluations for fantasy is taking a look and finding which high-ceiling players I can find for good value.

When discussing some post-hype sleepers this offseason, one of the first ones that always came to my head was Jorge Soler. A native of Havana, Cuba, Soler put his name on the baseball map as a premier international prospect, inking a deal with the Chicago Cubs. After being assigned to the minors, he quickly became one of the more highly-regarded prospects in all of baseball, peaking as the #26 prospect in all of baseball in 2013 and appearing as a consensus top-100 guy.

There were always concerns with Soler, whether it’d be injury, attitude, or the swing-and-miss in his bat, but the tools in held in his defensive end frame spoke to the potential he had. In his time with the Cubs, we saw all the good, bad, and ugly with him. He burst onto the scene with an exciting debut-season in 2014, slashing .304/.434/.456 in the limited 24 games he saw. Disappointment quickly followed, though, as Soler slashed a measly .262/.324/.399 in his first full-season (if you count 101 games as a full-season). More of that was to come in the 2016 season, as Soler started to see a declining role on a World Series team. He became expendable and was later shipped off to Kansas City in the Wade Davis deal.

From a fantasy perspective, the stock on Soler had fully crashed (426 ADP). This looked like a guy that might not never figure it out.

But April may have restored some of my faith in Soler. Watching him last year, he looked like a guy that just didn’t have any sort of plan at the plate. He’d take fastballs right down the middle, flail at offspeed on the outside, etc. But after a productive offseason, a lot of that has changed.

The plate discipline is by design. Soler said that he is watching more video of opponents and is focused on going after hitters’ pitches only.

“I’m very proud of that,” Soler said through interpreter and coach Pedro Grifol. “Almost every at-bat, I’m 1-2, 2-2. I’m prideful to extend ABs. Thanks to Pedro, too, who’s helped me a lot, scouting pitchers before the game. I kind of know what the pitcher is going to do with me, which isn’t something I did before.”

The early results have been promising. Soler possesses much more confidence at the plate now. His pitch selection looks like it has improved drastically, showing that he’s ready for the heater more. His SwStr% on fastballs has fallen from 14.2% to 8.4%.

As Soler adjusted, opposing pitchers did as well. The increased readiness for this fastball has led to Soler seeing a ridiculous amount of offspeed stuff. As a matter of fact, he’s seen offspeed pitches at a higher rate than anyone in 2018.

And with the fewer fastballs seen, the amount of pitches outside the zone he’s seen has increased. This has predictably increased his BB%. 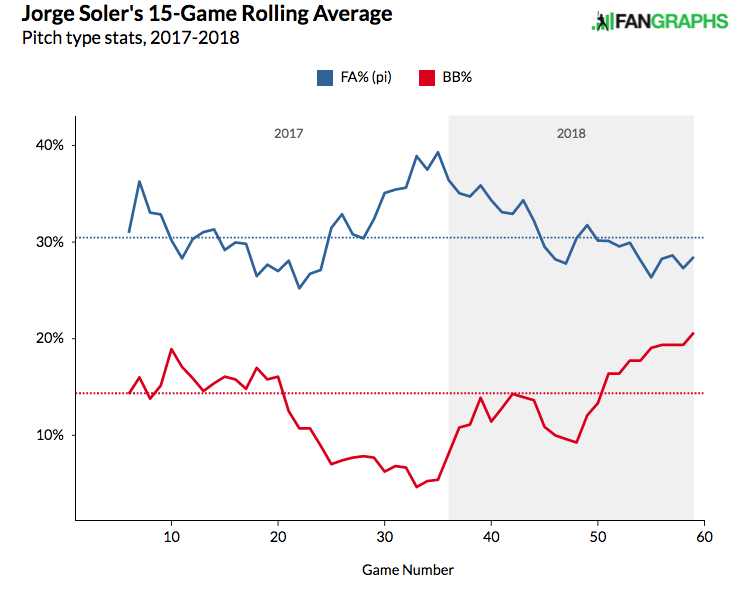 I doubt his 18.1% BB-rate is sustainable, but I’m fairly confident that he can consistently maintain a high rate as the season goes on. Not to mention, he’s batting in a Royals lineup that ranks dead-last in the majors in runs scored. The run producing abilities aren’t likely going to be much, but being one of the few above-average hitters in that lineup should bode well for his on-base abilities.

I was looking to grab Jorge Soler cheap this offseason and I suggest still doing that if you can, especially in OBP leagues. The high .407 BABIP will be impossible to keep up, so his batting average will inevitably fall, but I still wouldn’t be shocked if there is something like a .250/.350/.500 hitter here.